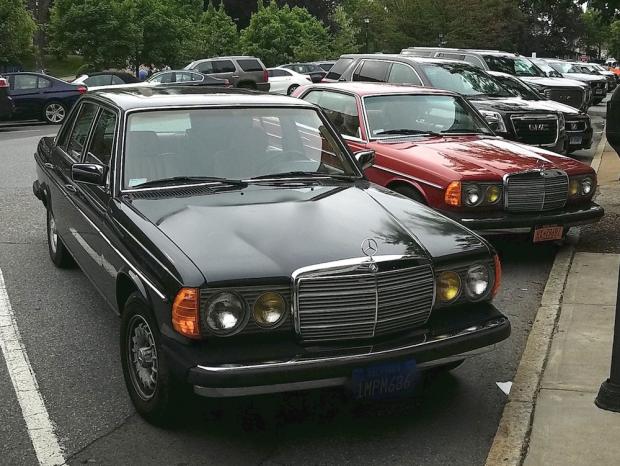 Body Buzz is dedicated to bringing you the best in life with an eye toward sustainability, and few things embody those ideals better than the Mercedes Benz W123 series, a platform for their lower-priced executive cars from 1976-1985. The relevance of these cars today is somewhat shocking; they’re so rugged that they still run as taxis around the world, especially in African countries, meaning that parts are not only available but still manufactured. The fuel crisis of the 70s and 80s saw Mercedes developing highly efficient diesel engines (a trend seeing an uptick again today), and with proper maintenance these diesels can run for as many as half-a-million miles before requiring an overhaul, after which they’ll be ready for another 500k miles. The gas engines are less prized today, but as an owner of a naturally aspirated 182hp DOHC fuel injected 12-valve straight 6 known as the M110, I am among those who cherish these noisy and strangely satisfying petrol beasts. In terms of efficiency and longevity, however, there’s no question that the diesels wear the crown.

Depending on age, condition, and body-type, today the W123s span everything from junk-yard parts cars to daily drivers to collectible antiques. The more rare the body type, the more desirable and expensive these cars are. The 4-door sedans are the 200 (2.0L 4-cylinder gas engine), 230 (2.3L), 240D (2.4L diesel), 250, 280, and lastly the venerable 300D (3.0 diesel) and 300TD (turbo diesel). Mercedes produced over a million of these sedans, so they’re not quite as valuable, generally, as their rare cousins the wagons (T for Tourismus und Transport) and the coupés (C for coupé, of course). Wagon prices have escalated wildly over the past five years, while the coupé, of which there were fewer than 75,000 made, have been going skyward for some time as the first truly collectible W123s. I own a 280CE, which is a 2.8 litre (280) coupé (C) with electronic fuel injection (E). My friend owns a 300TD, which is a 3.0 litre (300) wagon (T) with a diesel engine (D). You get the idea.

Let’s talk about the 123 buzz, a multi-dimensional experience.

First of all, just look at the things. Proportions are classic Mercedes, with many historic features mellowed but not erased as they would be in subsequent series (think plain-jane models like the 190 that followed). The W123 still featured Mercedes’ signature arced hood, the chrome radiator grill, the upright hood ornament, the slightest remnants of fins along the rear quarters that follow the uninterrupted lines sweeping from bumper to bumper. There’s the the boxy saloon cabin outlined in chrome trim with it panoramic views that make most modern cars feel claustrophobic. Paints are often magical in their ability to occupy a chromatic no-man’s-land: witness the strangely orange/crimson/brown of Brilliant Red, or the ever-changing metallic gold/green/silver called Thistle Green. On the interior these cars are similarly classic, with abundant real wood trim on most models, large-diameter steering wheels, analog gauges (of course), torpedo-style vents, wide yet supportive seats, gorgeous fabrics, vinyls, and leathers, and even sexy armrests and door handles. I go out our garage just to look at our coupé for the visual buzz—sure beats surfing the net for it.

As for the driving buzz, there’s nothing like it. Compared to modern cars, they feel a bit loose and floaty at first—not quite like a giant American boatomobile, but certainly more of a hovering feel than anything modern. However, after you acclimate to the suspension, you realize just how well these cars corner, tracking with an ease—even nonchalance—that’s almost gone from cars today. Yes, the W123 will lean over a bit in a corner, but it’s designed to do that, and it sticks like glue. But they’re just as fun—maybe more so—going straight. Built for safe and stable autobahn trips at sustained speeds of over 100mph, the W123s are heavy and steady. A bit sluggish off the line, get a W123 up to 85mph, punch it, and you’ll see 110mph+ in a heartbeat. Other than the traffic flying by and a bit of wind noise (inherent to these cars), you’d think 100mph was 40mph. These cars were built not to achieve high speeds in spurts, but to go very fast for long stretches.

Such comfort and luxury at any speed rounds out the W123 driving buzz. As my partner put it upon her first time behind the wheel of our coupé, “It’s joy. That’s the feeling.” Everyone who drives our car smiles widely upon taking the wheel, but they often giggle after a few corners and some high speed straight aways. Being a passenger is surprisingly just as fun, even in the back seat. These were “executive cars,” which translates into spacious, comfortable seating for four (five in a pinch). Even our coupé’s notably smaller back seat is roomy by today’s standards, but it is the sedans and wagons that offer that classic long-range backseat comfort—ashtrays and all.

If you’ve never closed the door on a W123, you should. The feel and sound inspires confidence you just can’t find in any modern car I’m aware of, and only in precious few older ones. Why do older Mercedes doors close so satisfyingly? Because they were micro-adjusted by hand until they did so. It’s also why the suspensions track so well, the fit of the interior components is impeccable, and generally there is no slop anywhere in these vehicles. Even today’s most elaborate robots can’t top the close tolerances of hand adjusting. To get a handmade car in 2018 you have to buy a Rolls Royce or any number of small-run cars costing hundreds of thousands of dollars, sometimes millions.

The W123 was so ahead of its time feature- and safety-wise that 40 years later they seem surprisingly well equipped. Of course computers have changed cars to a degree that an analog-era vehicle will never match, but back in the 70s Mercedes was leading the industry by as far as two decades. Pay enough and your W123 could have air bags and anti-lock brakes, while things we take for granted today were packed into these Benzes as forthright luxuries: self-regulating climate control, power windows and sunroofs, one of the best cruise control interfaces ever designed, an automatic transmission shifter that’s now standard issue across the industry, the nuanced suspension, and safety crash cages that exceed even today’s standards. I’m not trying to convince anyone that these old cars have it all—especially in terms of safety—but compare a W123 to a tin-can Toyota Tercel of the same era, and you’d hardly think these cars were contemporaries. That wide gap between a Benz and any other car has shrunk considerably as the rest of the industry has caught up, and I wouldn’t be alone in claiming that the W123 represents the pinnacle for Mercedes Benz’s entry-level line-up tp date.

I’ll admit that there are better winter cars than these rear-wheel-drive beasts, but, provided you can get out of the driveway, their beastiness is a significant advantage when one has to push through the elements. Traction control and anti-lock brakes are great things, but they don’t do shit when you’re hydroplaning across standing water or drifting over accumulated snow (exactly why Land Rover is making their newer modes even heavier than their heavyweight predecessors). Still, if you’re hoping to keep your W123 in decent shape, you might not want it out in foul weather anyways.

This concern about putting wear on these older cars raises the question as to how drivable the W123s are on today’s roads, and they actually represent one of the best vintage cars out there than can also be your daily driver. They do not struggle to keep up on the highway (to the contrary), they’re quite safe, reliable, and you can fill them up anywhere without worry (some folks fuss about ethanol levels, but it’s not required).

Depending on the condition of the car, there are still many great deals out there today as the W123 begins its ascent into Classic Car territory. As mentioned, coupés and wagons are increasingly rare and expensive, climbing over $30k for especially clean cars, but 300D and 300TD sedans can be had for under $2k in excellent driving condition—at least for now. That’s the sweet spot, in my opinion: finding a diesel W123 sedan that’s in decent-enough shape, taking care of it, enjoying it, and ushering it from “used” to “vintage” to “antique”. If you’re patient and diligent, you will eventually reap the inevitable escalation in value, but the better argument for acquiring a W123 would be the buzz of owning and driving one of the best cars ever brought to market.