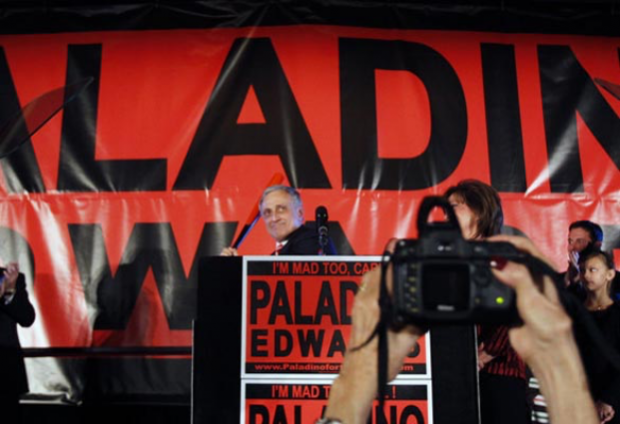 Let’s get one thing out of the way: ”blurt” is not a noun.

What follows is the text of an email that Carl Paladino sent to four women of color; three of whom sit with him on the Buffalo School Board. The fourth is the board’s attorney.

Over the last few months each of you has slandered me with blurts or the use of incomprehensible illogic and accusations that I am a racist and sexist or that I have a conflict of interest.

Slander may be defined as an intentional tort which means that I can initiate a lawsuit against each of you personally and you may not have the benefit to claim defense and indemnity from the Buffalo Public Schools.

Insofar as I am a public person, in order to establish slander I must also prove malice. Under New York case law, actual malice can be shown if prior to the slander you were put on notice that the slanderous statement is false and is not supported by fact.

This letter shall serve as notice to you that there is absolutely no discernible basis for your accusation that I am a racist or sexist. Further, there are two legal opinions from two different competent, qualified and objective attorneys that show that I, as a member of the Board of Education, have no conflict in dealing with issues involving charter schools.

This letter shall serve as further notice that in the event that you continue to offer false and defamatory statements, I intend to protect my reputation and will take all appropriate legal or other action at my disposal to do so.

Anyone with a checkbook can bring a lawsuit. It doesn’t mean anything. Anyone with a mouth or a pen or a computer can threaten a lawsuit. That, too, is meaningless.  The underlying question is whether the lawsuit has any merit.

Cutting again to the chase, were Carl Paladino to bring this threatened defamation lawsuit against the four women of color who serve with him on the board of education, his lawsuit would not likely withstand a motion to dismiss, because it would be completely without merit. In fact, anyone bringing it should be sanctioned for wasting the court’s time with utter frivolity.

Why? Because the underlying rationale behind defamation jurisprudence is that the plaintiff is protecting his reputation: his standing in the community, his good name. Alas, Carl Paladino’s reputation is not all that good. Sure, some people like him, and the Buffalo News has been his apologist-in-chief for decades, but Paladino is as reviled as he is beloved. Were Paladino to actually bring a slander lawsuit, and it made it past a motion to dismiss, he would by definition open his character and reputation up for scrutiny. The discovery process—the exchange of documents and things, and depositions under oath—would be compelling indeed.

Mr. Paladino accuses Ms. Nevergold, Ms. Cottman, Ms. Harris-Tigg, and Ms. Martin of slander because they have accused him of being racist, sexist, and of having conflicts of interest with respect to board action on charter schools. He threatens to sue them for slander. Mr. Paladino is not, however, a victim of actionable defamation.

Firstly, the alleged defamation must be a false statement of fact. “Pastor Jones beats his wife,” if untrue, would be slander. On the other hand, ”I think Pastor Jones is a violent jerk” is opinion, and not actionable defamation.

Secondly, insofar as these women of color have made these allegations against Mr. Paladino within the context of their shared service to a school board, their statements are likely immune from any action for libel or slander.

One need only go back five short years to find ample evidence of Mr. Paladino’s purported sexism or racism. In email caches WNYMedia.net published on two occasions in 2010, there exist myriad supporting examples.

Racism? Here’s the first batch of emails. Public official and Buffalo School Board member Carl Paladino sent an email in 2008 featuring a video of African tribal dancers and it was captioned, “Obama Inaugural Rehearsal.” An email dated October 2009 shows President and Mrs. Obama photoshopped into 1970s-style “pimp and ‘ho” outfits. It’s captioned, “White House Ball.” Another email showed an image of black males running from what appears to be an airplane bearing down on them. It’s captioned, “Holy Shit! Run, Niggers, Run!” In April 2008, Mr. Paladino, “told an educational gathering that School Superintendent James A. Williams was hired ‘because he was black.’” The Common Council condemned Mr. Paladino’s remarks as “racially divisive.”

Based on these materials alone—which Carl Paladino approvingly forwarded to a wide array of local bigshots, politicians, bureaucrats, and developers—certainly the women of color who serve the Buffalo Board of Education can easily establish that their charges of racism against Mr. Paladino are “supported by fact.”

Based on these two sets of released emails (more exist that have not yet been publicly released), the women of color against whom Mr. Paladino is waging war can easily establish that their charges of sexism against Mr. Paladino are “supported by fact.”

These women of color are, after all, referred to as the “Black Sisterhood“—sometimes by themselves, and sometimes by Mr. Paladino. There’s a significant difference, however. When they use that term to refer to themselves, they do so out of mutual respect, pride, admiration, and teamwork. When Mr. Paladino spits it at them with his characteristic vitriol, it drips with racial animus and misogyny, and it’s not accidental.

All of this comes just two weeks after Paladino publicly tore into Martin, calling her “ignorant” and threatening her license to practice law. This led Martin to make a formal complaint about sexism and racism by the Board of Education to the New York State Division of Human Rights. This is no way, incidentally, to “run a business.” It’s a waste of time, money, and resources to expose yourself and the school board to a civil rights complaint because you can’t keep your own “blurts” to yourself. Uncontrolled, hateful lurching from tantrum to tantrum is not how responsible adults behave in a professional environment. Even if you disagree strongly with someone, you don’t provoke them by calling them “ignorant” or otherwise trolling them.

“He’s gone after every female, African American female who’s an authority,” she said. “He’s done a lot of bullying. It’s typical of what he does. You can’t sit in an administrative position and do whatever you want to do.”

She also named the school board claiming it has taken no action to “admonish or address Mr. Paladino for his comments.”

Paladino maintains that Rashondra Martin has aligned herself with the four African American women on the board against the five-person majority, which is mostly white males.

“These people, devoid of any other plausible or reasonable argument to defend their positions on things, play the race card and that’s just what she’s doing,” Paladino said. “And that’s getting to be a burden.”

Finally, we turn to the allegation that Mr. Paladino has a conflict of interest as it relates to his advocacy in favor of charter schools. Companies associated with his Ellicott Development lease space to charters in Buffalo. Mr. Paladino rightly notes that a few lawyers have examined these dealings and concluded that there is no conflict of interest. That’s because Paladino quickly divested himself of any interest he personally had in these properties and transferred them to his children. Convenient. If his decisions on the board have a direct pecuniary benefit to Paladino’s children, that’s not legally a conflict of interest, but as a practical matter? None of this has been adjudicated or challenged in any adversarial way. The women of color on the Buffalo school board are well within their rights to continue to voice their opinion that Mr. Paladino is conflicted. They are well within their rights to accuse him of such conflict, and to do so in the press.

It’s not the first time Mr. Paladino has been accused of such conflicts. In 1993, then-Common Council President James Pitts told Paladino that he sits “on the top of the City of Buffalo like a vulture on dry bones,”; adding, “Mr. Paladino has mined the political fields very, very lucratively…If you begin to look at his involvement on all of these boards, his involvement is not based on public service but on private gain. Clearly there needs to be a separation of interests.” Pitts said Paladino’s conflicts of interest were ”as blatant as Danny Thomas’ nose.” Indeed, in the 1990s, Paladino targeted his ire at African-American council members James Pitts and George Arthur.

If Mr. Paladino chooses further to escalate this fight that he picked by suing these women of color for defamation, it will make for entertaining copy. It will not, however, further any of the interests he purports to be promoting or defending. A defamation suit isn’t going to fix any failing schools, it won’t raise attendance or graduation rates, and it won’t do anything positive for the district’s overall reputation.