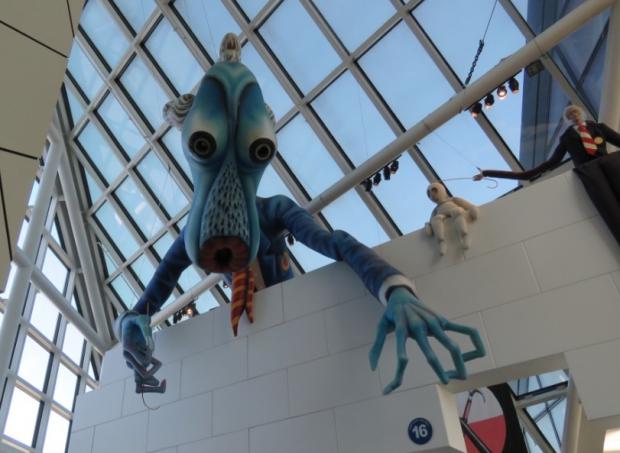 White House Press Secretary Sean Spicer represents the voice of the Trump Administration to the American public.  Donald Trump represents Donald Trump who to the surprise and concern of many of us is also the President of the United States. Can you imagine what goes through that mind of Donald Trump when he thinks about that? Your comments are welcome.

And of course there is a cacophony of other White House and dot gov voices screaming to get our attention.

They all use the press to deliver messages. Sometimes the White House, the Administration, and Donald Trump are in sync. Sometimes not.  Out of sync examples just this week include:

- Trump saying that the roundups of non resident aliens will be “military operations”.  And then within minutes the new Department of Homeland Security Chief, John Kelly, calls a press conference in Mexico to try to calm down US Mexico relations. He says emphatially: “No, we will not be using military force to roundup aliens”.

-Trump recently announced that we will soon have another chance to seize Iraq’s oil.  This of course inflamed our Iraqi allies that have given so many lives in support of the thousands of American lives sacrificed by a previous Republican Administration. Within days new U.S. Defense Secretary Jim Mattis flew to Baghdad where he held a press conference and announced that in fact the US has “no plans or strategies to seize Iraqi oil”.

Who on earth knows what the truth is?

Perhaps the biggest transgression (of the week) comes from the new National Security Advisor General HR McMaster (who replaced the disgraced John Flynn just this week). On Thursday at his first National Security Council meeting he declared that he will not condone the use of the term “radical Islamic terrorism” because “it is a non-beneficial term”. “Because terrorists are un-Islamic. ”  He clearly stated in the face of all things Trump that “the terrorist actors are not representing religious belief or actions”  The immediate push back that has the Alt-right media including Fox News is a tizzy of subterfuge, duplicity and misdirection.  So far the twitterer in chief has not responded. Perhaps he thinks that McMasters widely reported disclaimer is “fake news.” Somebody should tell him that McMaster really said this.

These conflicting messages represent a significant problem for the United States and American citizens.

Did I mention that Trump has announced an intention to increase our nuclear weapons capacity?

Did I mention that Trump has announced his intentions to “silence” what he describes as “enemies’ including the seven countries identified in the unconstitutional travel ban that his peoples crafted. The travel ban, as written in the Executive Order, has been declared unconstitutional and invalid by the Federal Appeals Court (9th Circuit).  The court ruled unanimously that “The Government has pointed to no evidence that any visitor from any of the countries named in the Executive Order has perpetrated a terrorist attack in the United States.”

Trump also wants to silence Iran and North Korea. He calls these and the 7 countries identified in the travel ban EO “enemies of America.”  So far the fascist oil states of Russia, The UAE, and Saudi Arabia, which, according to the conservative CATO institute, is the country from which 98.8% of all Americans killed by foreign terrorists between 2000 and 2016 actually came from.  Just to jog the nations memory, they were the terrorists responsible for 911 (2,996 deaths). The remainder of foreign based terrorists killing Americans on American soil 200-2016  is 1.4%.  Oh well, you gotta do what you gotta do Mr. President. But please remember, Obama killed Bin Laden.

Late Thursday (2/23) a “senior White House official” told the press  that “DHS and DOJ are working on an intelligence report that will demonstrate that the security threat for these seven countries is substantial.”

CNN reported early Friday (2/24) that the “White House effort to justify the travel ban is causing growing concern for some intelligence officials.”  It was also reported that “this is an assignment that has caused concern among some intelligence officials who see the White House as “politicizing intelligence” and the directive “is a conclusion in search of evidence”.  Kind of like the whole weapons of mass destruction false announcements that got us into the death grip of the Iraqi war. Remember Collin Powell?

Late Friday the AP obtained a DHS document from sources within the intelligence community which is described as “the report” referred to by the senior White House official on Thursday.  It is 3 pages long and is titled:

“Citizenship Likely an Unreliable Indicator of Terrorist Threat to the United States.”

Word came on Saturday (2/25) that the White House rejects that report, prepared by its own intelligence agency, as “not finished.” Apparently so. Clearly there is some fine tuning to do, perhaps even a yellow cake reference or two will be added. Maybe Trumps thousands of New Jersians celebrating the destruciton of the World Trade Center on 911 will make another appearance. Perhaps Dick Cheney can find a way for the trumpaholics to waive something unfactual that fits their ideology.

No matter what you think about the press, their self-interests (and there be many), the diversity of these voices have long-endured, These voices are protected by the rights guaranteed under the First Amendment.

Often, especially in these days of instant ratings and profitability, much of the press are willing pawns in the game of opinion engineering and “getting the message out” from the White House Briefing Room to the masses.  This mutual dependency has served the government and the private business media economy. Now, this is changing dramatically under the Trump ideology.

During the past two weeks Trump and his administration have been calling elements of the media including CNN, Politico, and the New York Times, “Enemies of the People.”  The Trump insurgents have doubled-down with their well crafted and simple Frank Luntz style talking points. They are out to eviscerate the media landscape an to disappear some of the major news outlets that while flawed, have served democracy well.

We can thank Lincoln and those that gave their blood in that civil cause for that long-endurance of a free press. Our social process for over 150 years has followed that precedent. It is part of what made America great.

Wednesday, Spicer held another press briefing that was disturbing. He treats the serious press with overwhelming distain. To his way of thinking they are unruly, unkempt,  and unwanted children. Like his boos he usies anger, slapdowns,  backhanded scolding, bluster, and constant repetition of the simple talking points. The intimidation from Spicer, and or the President, and or any of his legions of administrative carnival barkers is a wall of white noise. Literally. And it seems to be putting us to sleep. To make the point- rarely is there any thoughtful discussion involved. Just emotionally charged non sequiturs and verbal emojis. Dimness growing into darkness.

It is a disservice to the American people. Spicer seems to want to make it clear that like his boss, Spicer is the smartest person in the room. Everyone else is dim, dimwitted, or just plain dumb.  Melissa McCarthy’s brilliant bully impersonation of Spicer on Saturday Night Live is a hit for the ages. This administrations powerful strongman strategy is pushing, pushing, pushing. Now that the Trumpopaths have declared much of the serious press as the enemy of the people, it feels like something is about to topple.  I am concerned that it is us.

Today we live in a world of high-frequency trading where the game of life is played in nanoseconds. Things are moving fast.  We do not know what tomorrow will bring. but perhaps we can all still be players.  That is a big deal.

I am pretty sure that the Trumpaholic game plan is to remove us from the playing field.  The undermining of a long-enduring free press has been used by other, uh, power seizures throughout history.

Of course the most fundamental part of all of this is that the administration is full of master distractors.  They like it when the lead news stories are not about FBI investigations, Russian spies, and or, umm, Trumps tax returns and business assocaitions. And yet, we need to be concerned and vigilent about this press issue.

“First they came for the Socialists, and I did not speak out
Because I was not a Socialist.

Then they came for the Jews, and I did not speak out—
Because I was not a Jew.

Then they came for me—and there was no one left to speak for me.”