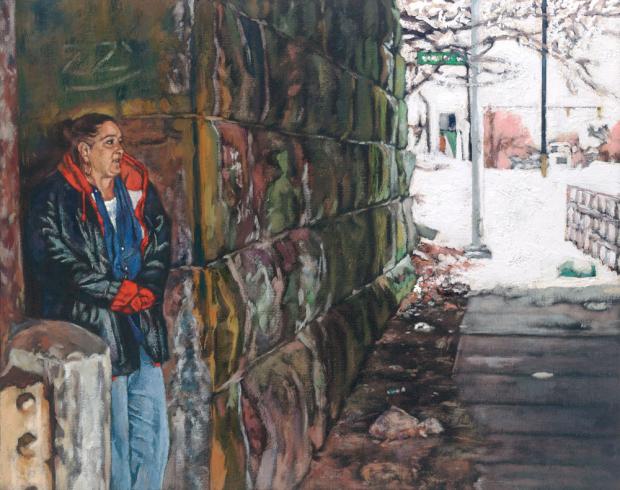 This past December, Hope Gardens opened its doors on the East Side of Buffalo. Hope Gardens is a newly built, 20-unit, permanent supportive housing project designed to meet the needs of women who have experienced chronic homelessness.

Women who have been chronically homelessness often have social histories steeped in trauma that frequently begins with childhood sexual/physical abuse and continues into adulthood with domestic violence, rape, physical assaults, and abuse. As one might imagine, this life-long abuse results in the lack of trust for others, post-traumatic stress disorder, mental illness, and in many cases chemical addiction.

One of the new Hope Garden residents, whom we shall call “Anna,” offers a story of a life derailed. She began her career in one of the helping professions. She joined the armed forces and served in Operation Desert Storm. After returning to civilian life, she married and had a son.

Anna’s life seemed to be going as planned until the car accident. Pregnant with twins, Anna lost the babies and suffered a traumatic brain injury. She was unable to work, was in constant pain, and became addicted to prescription medications. Her marriage fell apart. Due to the injury and dependency on pain medication, her behavior deteriorated. Subsequently, unable to live on her own, she found herself on the streets, and became addicted to a readily available source of temporary mental relief, crack cocaine. Increasingly reclusive and in need of safety, Anna found sanctuary in an abandoned building where her behavior affected no one other than herself. She became more and more isolated, but she was not actually safe. One night a group of men followed her in her abandoned building and gang-raped her. One of the men returned on multiple occasions to sexually assault Anna. When Anna reported the assaults, no one believed her: She was a crackhead.

Each of the women at Hope Gardens has had similar experiences. These women were not always homeless. Indeed none had foreseen homelessness, much less wished for it. They had not always been addicted, nor had they always experienced mental illness. Homelessness is not the definition of who a person is. Homelessness happened to these women.

Both researchers and outreach workers have found that homeless women’s needs are much different than those of homeless men. The Hope Gardens project, believed to be one of a kind, not only addresses this vulnerable population by combining two best practice models for service delivery, Housing First and Trauma Informed Care), but it contributes to the therapeutic well-being of its inhabitants in the very conception, design, and function of the building itself.

The Housing First approach is based on the idea of bringing individuals directly from the streets into housing. A “vulnerability index” is used as a way of measuring who is at the greatest risk of death living on the streets. Those with the highest vulnerability score generally are those with the most complex medical, physical, and mental illnesses. Once housed, residents are linked to the care they need.

The Hope Garden’s approach is to serve its women using the practice of Trauma Informed Care. The TIC method takes into account the complex traumatic experiences each individual may have had and allows for the identification of trauma symptoms and the beginning to an understanding of how these experiences have impacted each woman’s life. If the woman’s trauma is not addressed, other forms of treatment will be ineffective.

The Hope Gardens building itself has a number of features that are specifically designed to enhance a sense of comfort, well-being, and a close, nurturing community. Large common areas encourage communal activity, while providing a sense of light and openness for those who struggle with feelings of confinement. Individual apartments are fully furnished, cozy, and well lit with natural light—features that allow for comfort and privacy as well as brightness to mitigate depression.

Jesse: Out of Darkness by Gary L. Wolfe.

The building’s central courtyard is to be home to a therapeutic perennial garden where the resident women will nurture seedlings and see them grow into healthy plants, with the end result that the women will be creating long-lasting beauty for themselves and for future residents.

Careful attention has also been given to safety. The overall layout of the building, with its angled configuration of the residential wings arranged in opposite directions, results in the apartments “hugging” the garden and the central cafe and lounge. This arrangement greatly contributes to the sense of safety and comfort. All units are handicapped accessible, allowing the women to age in place, thus removing the trauma of having to move again.

Though this idea of a permanent supportive housing program allows women to live at Hope Gardens indefinitely, it is the goal of the project to ensure not only safety but assistance for these women to recover in some significant degree from homelessness and life’s traumas, hopefully resulting in heightened levels of wellness and, for those who wish, transition to independent living.

Karen Carman is the coordinator of Hope Gardens.