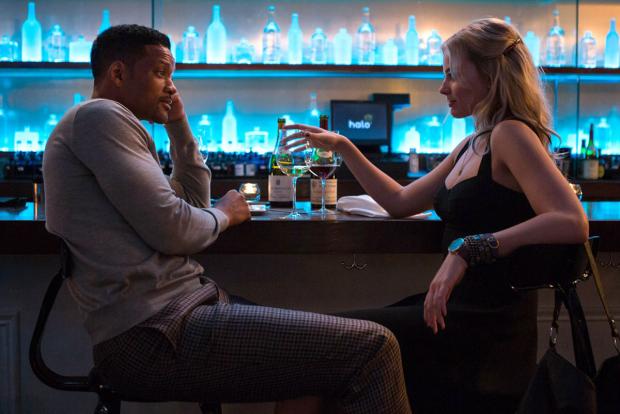 The end credits of Focus identify as a production advisor Apollo Robbins, and if you know who that is you’ll know what kind of movie you’re in for. Robbins is possibly the world’s greatest pickpocket, at least among those willing to identify themselves in public. He doesn’t steal, at least not permanently; instead he makes a living as a showman and as a security consultant, using the skills he learned from his father and brother as amplified by his own research into the workings of the human brain. He can get anything out of your pockets without you noticing it, even after he warns you he’s going to do it. I don’t know for a fact that he can remove your underwear while you’re fully dressed, but I wouldn’t want to be the test subject in a bet that he can’t.

The information about how pickpockets work is one of the most entertaining aspects of Focus, which stars Will Smith as veteran con artist Nicky and Margot Robbie as Jess, the fledgling femme fatale he takes on as a protégé. It’s not just a matter of getting your fingers in and out of the recesses of a person’s clothing: You have to be able to manipulate them in other ways to draw attention away from what’s happening. As Nicky explains, “If you can get their focus, you can take whatever you want.”

This if course is also how movies work, which explains why the art of the con powers so many engrossing films, from The Sting and Dirty Rotten Scoundrels through grittier examinations like The Grifters and David Mamet’s House of Games. (Con artists have been in films at least as far back as Preston Sturges’s The Lady Eve in 1941, but they hit their stride in the 1970s when changing mores meant they could get out of the movie alive without having to go to prison.)

That Smith and Robbie are attractive movie stars of course indicates the other direction in which this movie is going to go: They hit the streets and the sheets. It’s a tale of three cities: After meeting in Manhattan, Nicky takes her to New Orleans to show her a big-scale operation he’s running to prey on tourists in the week leading up to the Super Bowl. He dumps her at the end, afraid that his kind of business and pleasure don’t mix. But they meet again a few years later in Buenos Aires, both working different cons on a famous race car driver (Rodrigo Santoro).

As a romance among thieves, Focus at its best has some of the sultry ambiance of Out of Sight: The soundtrack has more smooth funky grooves than a 1970s prom, and if Smith and Robbie are no George Clooney and Jennifer Lopez, they’re not bad either.

Focus was written and directed by the team of Glenn Ficarra and John Requa, whose oddball I Love You Philip Morris also featured a con artist. Recall that Smith’s career in the movies got started as a young con in Six Degrees of Separation, so it’s familiar turf for all. For the most part Focus is a slickly entertaining popcorn movie. The only time it stumbles is in the last section. That’s when, by the rules of this genre, the filmmakers have to lull the audience away from guessing where the story is going without boring them: That’s a third act problem to which Ficarra and Requa fall prey: It’s not enough to have an interesting surprise ending (which they do); you have to get there in an interesting way.

It’s hard not to feel bad for Julianne Moore lately. Oh sure, she got an Oscar this week, and long overdue. But Still Alice wasn’t nearly as good as her performance in it, which is often the case. At least in Seventh Son, which just made it to theaters after sitting on the shelf for over a year, she had the sense not too try to hard in a movie where she was only going to be overshadowed by special effects. But she’s back this week in Maps to the Stars, baring her all (literally) in a film that just isn’t worthy of it.

Set in Hollywood, this is one of those ensemble pieces that doesn’t let you know how everyone relates to everyone else until the end. Moore plays a middling actress who boosted her career by revealing that she was sexually abused by her mother, a famous actress who died young. These memories were brought to the surface by her therapist (John Cusack), who hawks his programs on TV infommercials. That of course doesn’t make him prima facie a huckster, but who would think otherwise? He and wife Olivia Williams have a 13-year-old son (Evan Bird) who is trying to restore his career after overcoming drug addiction. (Yes, this is the kind of movie where 12-year-olds are drug addicts because that’s what rich movie stars do.) Just arrived in town is Agatha (Mia Wasikowska), an 18-year-old with severe burns and secrets to reveal.

I don’t know what Hollywood ever did to screenwriter Bruce Wagner, but he’s certainly made a career out of trashing the place in novels and screenplays. Few of the characters here are evil, but they’re all venal, petty, and self-obsessed. The plot is pervaded with incest, which is to a dramatist what anchovies are to a cook: a little bit goes a long way, and there’s a lot more here than Wagner has any metaphoric need for. The film is directed by David Cronenberg, who has one of the modern cinema’s coldest eyes—in his films you always feel like you’re looking at specimens under a microscope. Hollywood has always been fond of making itself its own whipping boy, and this is by no means the ugliest example of Tinseltown self-laceration I’ve ever seen, but I can’t see where you would take that as a recommendation.