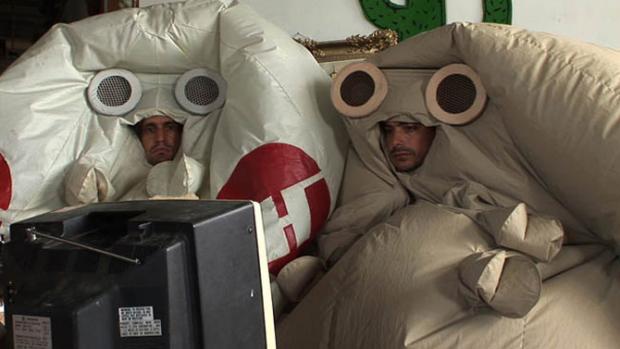 I am prompted by the discovery that their 2009 film The Yes Men Fix the World is availble to watch for free on YouTube to reprint the review I wrote of it at the time. If you don’t know their work, the Yes Men are two activists who do fake news the hard way, by staging satirical events for the press to cover. Clearly I would write the review somewhat differently now, but I think it’s still valid. And I want to encourage you all the watch the movie, linked after the review: as I tried to make clear in my opening, it is really, really funny.

I chuckled, I giggled, I snickered, I hooted, I cackled, I chortled, I guffawed and I roared. I may even have tittered, and thank god I wasn’t in public because that’s never a pretty sight to see. But minute per minute I laughed more at The Yes Men Fix the World than I have since… well, I can’t remember.

The Yes Men, you may recall if you saw their eponymous 2004 film, are performance artists/pranksters Andy Bichlbaum and Mike Bonnano. Their job (aided by people who mostly and perhaps wisely remain offscreen) is, in their own words, to “pass ourselves off as representatives of big corporations we don’t like, make fake websites and wait for people to contact us.”

You would have to be pretty insulated from the news not to have heard of one of their recent stunts: during the 20th anniversary of the Bhopal disaster, which immediately killed nearly 4000 people and may have contributed over the years to the deaths of as many as 35,000 others, they appeared on the BBC as representatives of Dow Chemical to announce that Dow (which had recently purchased Union Carbide) had decided to pay $14 billion in restitution.

Of course, Dow Chemical had promised no such thing. They and Union Carbide before them have for years steadfastly resisted taking blame for the accident. People have short memories, after all.

The hoax was discovered within a day, though not before Dow’s stock price plummeted. (Helping people is not good for the bottom line, but we already know that.) Wisely, Dow did not press charges, presumably recognizing that to do so would only result in more publicity for an issue they have been hoping people will forget.

The BBC appearance is one of a handful of pranks documented in Yes Men Fix The World, each one funnier than the one before. It’s a better film than its predecessor, showing a keen sense of the ridiculousness of audiences at conferences docilely listening to the most inane proposals.

Bichlbaum and Bonnano started on their current career path by independently subverting the mechanism used by international capitalism to indoctrinate young children: the toy industry. Bonnano (who, as Igor Vamos. studied at the University of Buffalo and interned at Squeaky Wheel) was a member of the “Barbie Liberation Organization,” a group that purchased Talking Barbie and  G.I. Joe dolls, switched their voice mechanisms, and then snuck them back onto toy store shelves. As a video game programmer, Bichlbaum replaced the blonde bimbettes in an action game with men in speedos who ran around kissing each other.

Introduced by friends who rightly guessed that their similar interests might spark greater combined pranks, Bichlbaum and Bonnano devised several websites parodying the 2000 George Bush campaign and the World Trade Organization. Both were so cunningly designed that many visitors didn’t realize that they were anything less than the real thing. Their Bush site prompted a comment from its subject that “There ought to be limits to freedom.”

Their WTO site brought an even stranger reaction: requests for information and invitations to speak at business conferences. Recognizing a golden opportunity when they saw one, B&B decided to attend, posing as WTO representatives and delivering presentations that they assumed would outrage their audiences.

If part of you feels compelled to condemn this kind of behavior, consider the good they do. First, they put the media spotlight back onto issues that have faded from attention. Second, they make you consider how much vetting the media does on an ongoing basis. If these two can get on international television broadcasts, why should we believe in any of the other so-called experts whose heads blather at us day in and day out?