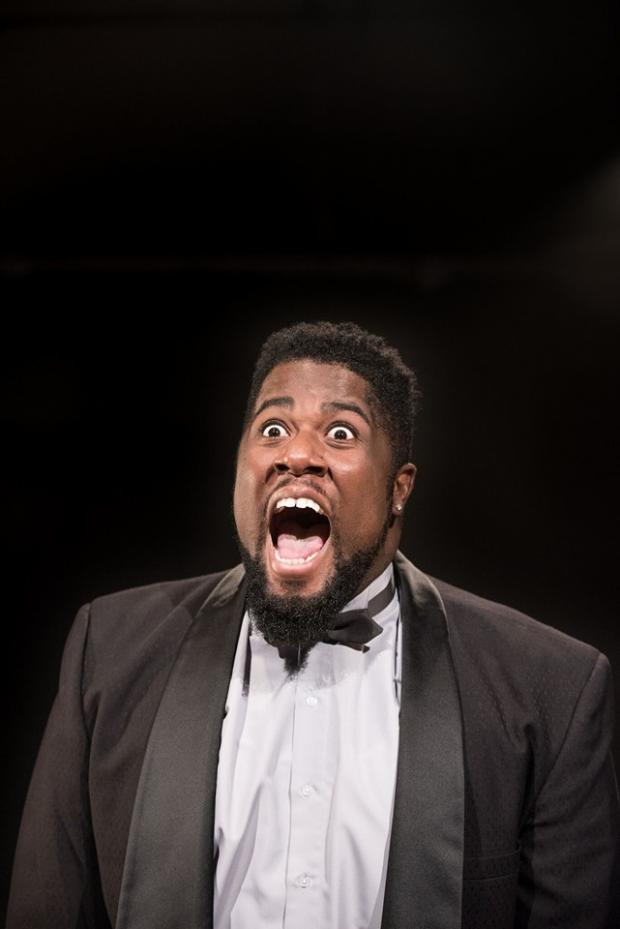 The Shipment, written by Young Jean Lee, is a comedy. Because it is satire, Lee ridicules dearly held societal norms. Because it is absurdist, she reminds that so much of the world cannot be taken seriously. Importantly, Lee makes us wonder why we give any credit to certain social demands. The Shipment scores its comedy points but you may find yourself thinking about it long after the show is over rather than laughing at each gag then forgetting the whole thing before the night ends.

Importantly, The Shipment features five very fine actors familiar to Buffalo theatergoers. Under Daniel Shanahan’s direction each is working the Torn Space stage at a level of personal best. You might already discern that this script is a challenging one for performers. It requires well-honed craft, including dance and song. It also asks actors to entertain the audience while engaging them intellectually.

The Shipment is a 90-minute autopsy of cross-cultural perceptions, particularly they way we all see black people through the lens of popular entertainment. Audiences get a taste of the scrutiny to come as they enter the theater.

The first turn is an old-timey minstrel show. Limber-limbed Greg Howze approaches, all smiles and teeth. Joining him is Dudney Joseph, eyes popping with wonder. With a bit of tonal nuance, the accompanying music morphs from nostalgic to industrial and the jolly dance more threatening.

So often irony and satire is word-based and thus an intellectualized experience. Here it is physical and more impactful than witty lines. Similarly, Danicka Riddick introduces a musical interlude midway through the The Shipment. It starts as a simple, reflective plainsong. As each new line of lyrics is added, and as additional voices join in, the musicality becomes more complex, the message demanding.

This is the fundamental difference between theater and literature. At best, the written arts are second hand reportage. Theater and performance allows audiences to witness transformations first-hand.

Peter Johnson steps up to the mic, going one step beyond the current generation of ghetto standup comedians. He shows them up as merely coy and cute, like children paying in mud. Meanwhile, Johnson shoots a spit-wad of harsher material, aiming it at our faces with stinging slingshot force.

How do audiences respond? If you try to roll with him you will, sooner or later, be caught up short and try to swallow your laugh. But, if you try to resist you will, helplessly, instinctively, find yourself laughing. This segment typifies playwright Lee’s challenge to audiences. Don’t expect to like or dislike anything. Your perspective will change throughout this ride.

The full cast samples lines and characters to tell a typical up-from-the-tenements story…hard-working maternal figure wants her boy to be a doctor, he wants to be a rapper. Friends distract him with the chance to sell drugs and seduce women. The line-by-line delivery is robotic and lifeless as our hero goes to jail, finds religion, becomes famous and yadda yadda yadda. Characters are gunned down with trite inevitability. Riddick’s ghetto women are either literally from heaven or mindlessly sexual. As a video ho, she twerks as vacantly as a rocking horse. Playing a what would be flamboyant hairdresser, Dudney Joseph could make Tyler Perry blanch.

Director Shanahan follows Lee’s lead, steers the actors away from tickling the audience for guffaws. Doing so, viewers question why the black characters in our TV, film, and, sadly, theater are so non-dimensional. No wonder why the public is confused and disappointed when black people in real life are more complex and do not enter and exit and live our their lives for situational convenience.

It is only the final scene that drags a bit. We are introduced to a hive of sophisticates behaving badly but ever so politely. If tightened, the opening premise (as deft a spoof of consumption culture as it is) would be closer to the devastating punchline, which sells the piece.

Individually and as an ensemble the entire cast is fine. It is vividly staged by Shanahan on Kristina Seigel’s simple set. Jessica Wegrzyn uniforms the cast in variation on tuxedoes. Choreography and musical direction, though uncredited, are very good. Ms. Lee’s  script is brilliant and, abetted so well by the local talent, makes Torn Space Theater’s production of The Shipment a highly recommended event. Worth seeing, and perhaps more than once.