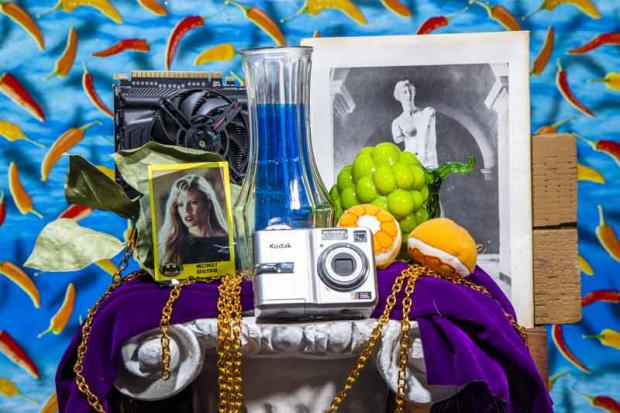 The artwork of Nando Alvarez-Perez currently on display at the CEPA gallery concerns the complex matter of two-dimensional and three-dimensional in the history of art, with an eye to how photography complicates the matter.

The Greeks invented 3D art, but didn’t theorize about it. The Renaissance more or less reinvented it—in part on its own, in part learning from the Greeks, through the Romans, who essentially adopted the Greek way of making art as their way—and theorized about it. After the medievals had rejected and abandoned it as irrelevant to and possibly distracting from the deeper truth they were getting at in their art. And the modern era reinvented 2D—and theorized about it—in its own quest for a deeper truth in and through art. Not the same deeper truth as for the medievals, but perhaps analogous. And rejected and abandoned—lost interest in—the Renaissance pursuit. Meanwhile, the reinvention or rediscovery of 2D more or less coincided with the invention of photography. A technology as well as a technique, that seemed to image the visual world as it really existed (which incidentally seemed pretty much in accord with the Renaissance idea and pursuit). But wait a minute. Not so fast with photography. With photography, it turns out—with everything really, but in spades with photography—things are not always what they seem. More problems than ever about 2D and 3D.

The exhibit doesn’t resolve—as it they were resolvable—any 2D/3D issues, but indicates and illustrates them. According to an accompanying expository sheet, the exhibit “reveals and revels in” the way they create or allow for “slippage and uncertainty.” The principle of ambivalence so dear and core to current era art of whatever genre.

The exhibit is called Totems for a Flattened Now. There are five pieces—two free-standing, three wall-mounted—in each of which 2D plays against 3D in any number of ways. Each piece consists of multiple photos or other flat visuals—but usually of 3D items, and often the pre-eminent 3D art item sculpture—and a kind of variably configurable aluminum framework configured to provide frames for some of the visuals.

Work from Nando Alvarez’s Totems for a Flattened Now at CEPA Gallery.

The sculpture in the photos is often Greek or Roman, but with at least one ancient Egyptian example—ancient Egyptian sculpture never achieved full-blown 3D—a medieval cathedral door jamb statue, and an African art statue in which European Renaissance perspective vision is hardly an object.

Another visual is of the interior of a small church, looking from the back end of the church down the main aisle toward the altar, a markedly Renaissance perspective view. Others are essentially wallpaper—usually unframed—installed behind the more salient visuals and framing. Sometimes in patterns reminiscent of the kind of architectural façade screening popular around the 1960s used to hide architectural authenticity and for a flatness effect.

Other visual subject matter includes a prism and a mirror, a camera, and Photoshop photo manipulation kit and accompanying CD. Another is a comical recollection of Renaissance artist Sandro Botticelli’s famous painting The Birth of Venus. A kind of lawn art statue of Venus, naked and standing on a scallop shell, in front of a large aquarium of goldfish. Another photo is of the Greek art statue of the discus thrower partially clothed in San Francisco Giants gear. Alvarez-Perez was born in Buffalo but studied at the San Francisco Art Institute, and continues to live out there.

The exhibit continues through March 5.