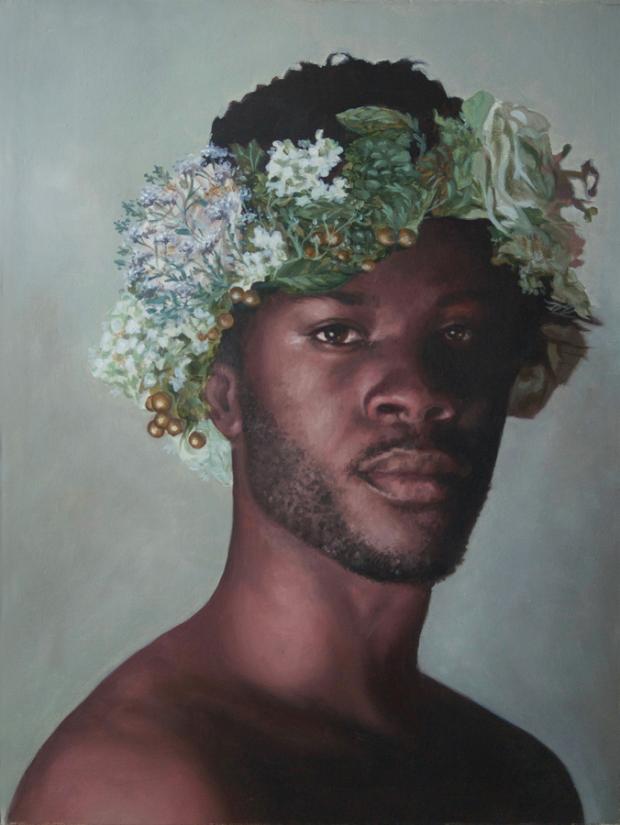 JULIA DOUGLAS’s Richie is part of a series, occasioned by the murder of Trayvon Martin, celebrating black men. Her work will be at Project 308 Gallery starting March 5. Be sure to like her on Facebook and find out more about classes she will be teaching.

I am a woman, and I am a woman of color. Two factors which automatically create a series of intrinsic challenges in my moment in history. However I find myself in a curious point in time; an era in which for all its challenges, my color and my gender is finally equipped with a voice, a vote, and a social climate in which change is possible. That power is expressed in numerous ways. Some people use the written word, while others utilize politics etc. My method of expression is the visual arts. My subject matter is not necessarily a conscious choice, but rather a natural expression of the things I internalize on a day to day basis.

This particular series of paintings has come about in response to the events ranging from February 2012 to current. I remember very distinctly hearing about the Trayvon Martin case on social media first. My initial response was complete and total dismissal. In all honesty, I thought it was just a face book hoax. As more and more coverage emerged I was horrified. Soon our country was in a flurry of skewed facts, inaccurate race perceptions, and overall confusion. Since that occurrence and the nearly unbelievable continuation of others like it, I have remained stunned; upset by the fact that people are still dying because of the color of their skin; afraid because many of the men I cherish are brown.

For a while, my body of work focused on gender expectations and the role they play in African American/ ethnic male culture and their portrayal in the media. It was much more of an internal examination, focusing on Black on Black perception. The concept behind the work has been that men of color have a certain preconceived role in our culture. This role is comprised of certain characteristics such as aggression, hyper sexualization, lawlessness and a general lack of sensitivity and intuition. The initial concept focused much more on gender and stereotypes attached to the concept of masculinity within black culture. However my series has evolved over the past few months. The focus now is slightly broader, and has less to do with sexuality than it does with character in general. The goal now is more along the lines of shining a spotlight on men of color as human beings. The series utilizes portraiture to give a glimpse of these men as sensitive, honest, loving and at the very least, human. I especially enjoy playing with the idea of vulnerability and innocence through implied nudity and the choice of models who possess realistic body types.

Overall I see this series as a continuous effort. So long as I find minority men beautiful and their lives worthy of dialogue, and I can’t imagine that changing. It may grow and branch out into a conversation about women or maybe even another aspect of this topic. However with every portrait of a young man of color I paint, the inner theme will be present. It’s inescapable as it is a part of who I am as a young black woman.