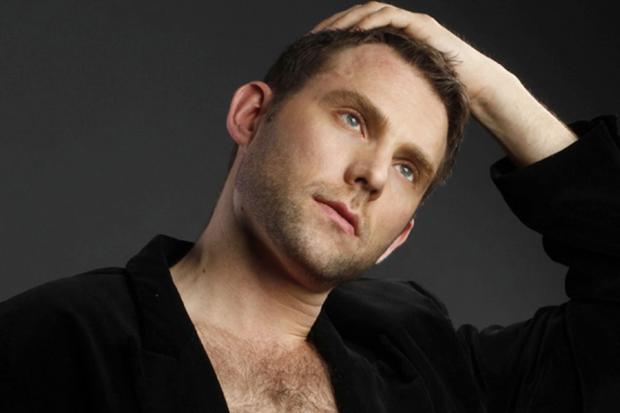 He is a resident member of BUA but has also worked for several other Western New York theaters. At BUA, he’s appeared in The Homosexuals, Fucking Men, The Irish Curse, Poseidon, L’Imitation of Life, The Birds Attack!, The Normal Heart, My Deah, The New Century, Bent, The Temperamentals, Fit to be Tied, The Divine Sister, and Avow. He has done commercial and voice over work for Paragon Advertising and has appeared in commercials for Value Home Centers, Mighty Taco, Riverside Men’s shop, and Hutch’s restaurant—often as the handsome husband in a heterosexual couple. He starred in the independent film Sugar Wonder Blues, which is scheduled to premiere in Western New York later this year.

Seitz is one of those actors who seems to gain strength and range with every role. While he is typically cast as a leading man, he is not above donning drag for BUA’s popular comedy parodies. He was delightfully deranged as multiple characters in their Alfred Hitchcock parody, The Birds Attack, and earlier this season audiences were amazed by his absurdly delicious send up of Carol Lynley in Poseidon! An Upside Down Musical, in which he donned 1970s mod attire and crooned “The Morning After”…hilariously badly.

In Mothers and Sons, Seitz’s character is unexpectedly confronted with the mother of his husband’s former lover, a man who died of AIDS 20 years ago. The play addresses many issues related to contemporary gay life and the history of AIDS. Seitz is marvelous in the role, which seems to connect nicely to his own life of activism and social advancement: By day, Seitz works at Gay and Lesbian Youth Services.

What word would your friends use to describe you?
“Flamboyant,” in reference to the ways in which I interpret, enjoy, and share my life.

What quality in the character you are playing is most unlike your personality?
Having superb parenting skills. I decided long ago, the ways in which I live my life would not, in my opinion, be conducive to raising a child. I love children and have found great pleasure in other people’s…that aren’t mine…or don’t spend much time around me….

What quality in your current role is most like your personality?
The ability to engage in conversation with most anybody, in most settings, under most circumstances with relative ease.  This doesn’t necessarily mean I know what the hell I’m always talking about or that conversation is even warranted, but like my character Will, I tend to throw out, at least once in every conversation, “Should I alert you when I’m bantering?”

When and where were you the happiest?
I grew up with the beach in my backyard, so the times spent swimming and boogie boarding with my sister and our neighbors.

What is your idea of hell on Earth?
Being forced to live the stereotype of the so-called “American Dream”: a suburban landscape complete with home in subdivision, children, dog, and minivan. I don’t completely understand, but don’t judge, those that have achieved that version of the American Dream. I mean listen, I live in a double in Riverside; to some, that’d probably be hell on Earth. Should I alert you when I’m bantering?

What is your greatest fear?
That at I look back at my life with more regret than anything else. That I might have to have the conversation with myself about what I could/should have done differently, and why I didn’t do it. That I discovered I lacked a true sense of self.

Which talent do you wish you most had?
The ability to sing. I sing like shit.

Which superpower do you wish you most had?
Um…well I fly in my dreams all the time so that’s enough really…In real life, I’d run into everything. I think I’d want to be invisible. (I’m sure for all the wrong reasons.)

What would you change about your appearance?
Nothing. Have you seen me? (Tongue firmly in cheek.)

What trait do you dislike in others?
Crudeness. (See above comment.)

What do you most value in your friends?
When they “call me out” on bad behavior. It’s good to know people care enough about me to point out bad behavior, in a healthy way that gives me some insight and makes me want to do better.  I mostly have my partner Dave to thank for that. He keeps me on track.

What quality do you most value in a good director?
Passion

What is your guilty pleasure?
Late-night rendezvous with wine, YouTube, and Liza Minnelli.

Who is your favorite fictional hero?
Superman.

Who are your real-life heroes?
Everybody who works for a company/organization that is mission- and purpose-driven that works towards the betterment of our communities in every capacity. Bayard Rustin, those who ignited Stonewall protests. Edith Beale…I mean I could go on and on…honestly.

What do you consider to be the most overrated virtue?
Excellence.

On what occasion do you lie?
I don’t lie, unless I’m caught lying.

What was the subject of your last google search?
The meaning of quality.

If you come back in another life, what person or thing would you like to be?
The opposite sex.

What is your motto?
NOTHING ever surprises me.…