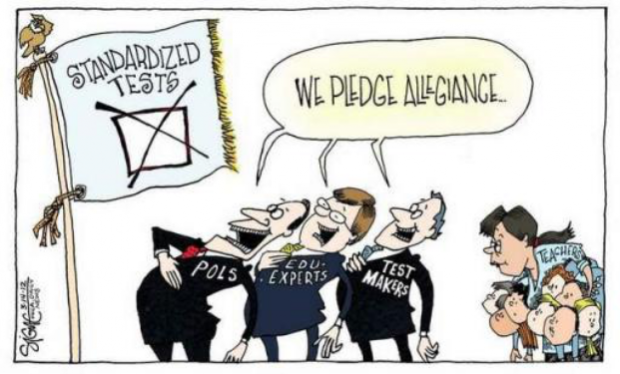 School districts throughout New York State are now busily plotting out their budgets for the 2015 — 2016 school year. These budgets must be in final form by mid-April so that school boards can adopt their budgets in time for the public to vote on them by late May.

Every district relies on some amount of state aid for every year’s budget, and the state legislature’s unconscionable and cynical “Gap Elimination Adjustment” has short-changed New York’s public schools in the tens of millions of dollars.  Albany balances its own budget by robbing the state’s students of teachers and programs. Governor Cuomo then turns around and relies on standardized testing to determine which schools and teachers are “failing” or “non-performing” while refusing adequately to fund any of it.

In past years, districts had, by now, been given a close estimate of how much state aid they would receive, so that they could work on the local share of their revenue budgeting in an informed way. This year, however, is different. School districts are completely in the dark about how much state aid they might receive, and it’s making budget planning one big guessing game.

Governor Cuomo has introduced an education reform plan that would add just over $1 billion in public school funding; however, this increase in state aid comes with some big strings attached, and no one knows if it’ll pass — and in what form — by April 1st. We hear a lot about “on-time” budgets, as if it’s a laudable cause for celebration that the state legislature manages to accomplish its one real job in any given year. But what about the right on-time budget? Cuomo has said that no school district will see an increase in state aid over last year if his conditions are not met.

2. The ability to appoint receivers to manage the lowest 5% of non-performing schools;

5. Changes to the teacher evaluation system that Cuomo already implemented, relying more on testing and outside evaluators.

Cuomo is also proposing to do away with the STAR property tax exemption and replace it with a property tax relief credit that would phase in depending on the value of your home and your income — it disproportionately benefits downstate homeowners whose assessed property values are very high.

So, we have to rely on a dysfunctional Albany system and the three men in a room to negotiate an education reform and funding equation by April 1st, so that school boards across the state might be able adequately to plan their budgets for the next school year. The assault on public education — against students, teachers, and parents — has many fronts. The biggest threat, however, is treachery from within. It defies logic to simultaneously de-fund schools in order to balance the budget and demand that teachers, students, and schools are declared “failing” or “performing” based on a few standardized tests.

This simply isn’t how learning should look.