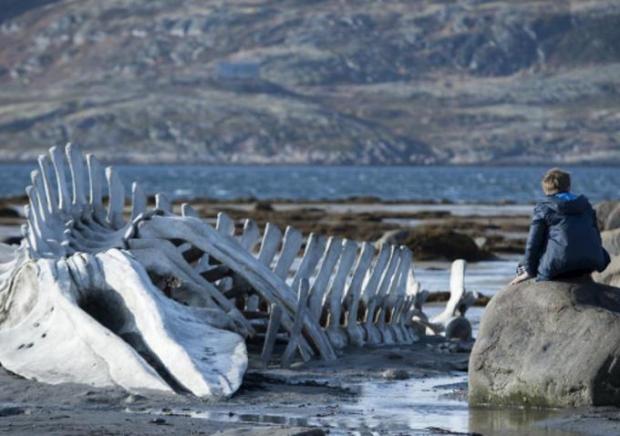 I don’t know if Russian Federation president Vladimir Putin is familiar with either the Bible or the work of English political philosopher Thomas Hobbes, and whether any such conversance bore on Russia’s selection of Andrey Zvyagintsev’s Leviathan as its entry in this year’s Academy Awards’ foreign film competition. I don’t even know if Putin had any hand in the decision. But what is inarguable is that Leviathan renders an appalling portrait of life in a remote corner of Russia’s northwest, where economic and spiritual desolation are pervasive in a society governed with a gross indifference to fairness or the public weal.

Accusations of autocratic corruption and evils which even extend to murder have widely been lodged against Putin’s Kremlin for more than a decade, but it’s hard to see why it would want to send this movie to the Oscar judging. Definitely not a complement to international trade or tourist promotions.

The movie’s title comes from Hobbes’ 17th-century tome of the same name (in turn from the sea monster defeated by God in several Biblical accounts). Hobbes famously described humanity as naturally engaged in a war of all against all, the end of which required a strongman ruler’s suppression. (Hobbes didn’t much care if he was royal or not.) Is any of this relevant to Leviathan’s selection? Darned if I know, but it’s certainly easy to regard its story as a microscopic portrayal of Russia’s general deprivation of justice.

The imperiled protagonist in Leviathan, Kolya (Aleksey Serebryakov), is a middle-aged auto mechanic in a small, declining town on the Barents Sea, where he lives  in a house he helped build on land inherited from his father. He dwells there with his second wife Lilya (Elena Lyadova) and his early-adolescent son Roma (Sergey Pokhodaev). Their house, and the life within it, are in severe peril as the movie opens. The town government is under the coarse, overbearing, and corrupt personal regime of the mayor, Vadim (a vividly convincing Roman Madyanov). A portrait of Putin is repeatedly shown on his office wall. Vadim wants to condemn Kolya’s place, paying only a tenth of its probable value, and give it to a large-scale developer.

Very early on, an old army buddy, the ruggedly attractive Dmitri (Vladimir Vdovichenkov), a Moscow lawyer, arrives to try to prevent the mayor’s plan from succeeding. Dmitri expects legal protests to fail in the subverted court system, and he’s counting on a compilation of Vadim’s serious, unreported misdeeds to leverage a better deal for his friend.

Kalya is hot-tempered, and a heavy imbiber of vodka—as is almost everyone else—but he’s capable of a loving protectiveness of his wife and son. His forced descent into abysmal ruin is a slow moving nightmare.

Zvyagintsev’s method is low-key, almost contemplative, despite the narrative’s course. He’s very skillful in setting his scene; the opening shots establish a striking sense of the rugged mountainous geography by the sea, and the decaying, semi-abandoned state of the place. He continues with wide-angled long takes throughout, and with a deliberate pace.

Where his picture fails is in its over-determined, too weakly plotted resolution, in which important facts seem to have gone missing. This winds up being deeply sad and dismaying without being quite plausible.