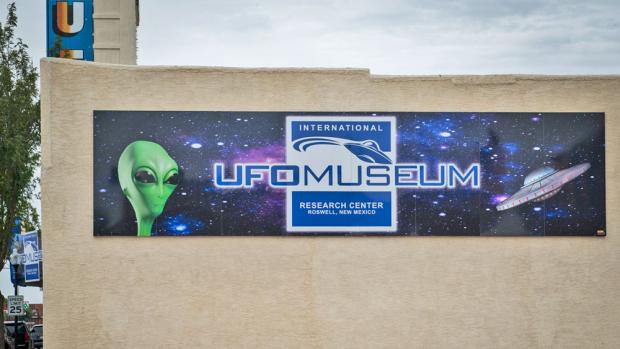 Last July, I was passing through Roswell, New Mexico, and I encountered a small group of bizarrely attired young women. I was then working on a photographic project in the Chihuahuan Desert, so I stopped to photograph them.

I asked, “Why are you dressed like that?” They pointed behind me and I saw the outer wall of the Roswell, New Mexico International UFO Museum and Research Center, which they told me they had just visited.

I said, “You know, there is no real evidence of any kind of alien invasion ever.”

“Well,” one of them said, pointing over my shoulder, “then why would they have a museum?”

Questions are not facts

She had a good question, but she opted for the wrong answer. They have a museum because it will cater to people who like to believe there are people dedicated to keeping secrets from us, and who are even willing to buy tickets, as she and her friends had, to endorse that notion.

You may remember some of the conspiracy theories around John F. Kennedy’s murder. All of them hinged on the “fact” that one man could not have fired those two or three shots in that period of time and done the nasty deed. The theorizing resulting from that assumption manifested itself in many ways in pop culture, in movies and books and TV talk shows.

Lee Harvey Oswald had been qualified as a Marine sharpshooter. He was firing at a car moving straight away from his position at a few hundred yards. Any of us who, in those years, qualified as Marine sharpshooters could have made that shot. I have never seen any JFK assassination conspiracy theory coming from anyone who did that work. It has all been from people outside.

People say, “If it wasn’t a conspiracy, how could that have happened?” Well, if you knew how to use a rifle at that range, that’s how it could have happened.

Could it have been a conspiracy? Sure. Lots of could-haves are out there. But I haven’t seen any convincing evidence that there was.

Likewise with 9/11. After the World Trade Center and some close-by buildings went down, there was a lot of conspiracy business about how the CIA had secretly planted explosive devices to make sure that after the terrorist-controlled airplanes hit, the buildings would not only catch fire but collapse.

It wasn’t just conspiracy-freaks and run-of-the-mill idiots who got fired up with this. I received five emails from a SUNY Distinguished Professor, all beginning with, “If there wasn’t CIA involvement, how do you explain…”

It turns out there are lots of reasonable, rational ways to explain what happened when JFK got killed and when the WTC went down. About the government’s refusal to tell us about the aliens: Yeah, they haven’t told us about the aliens. But the fact that they haven’t told us about something that doesn’t exist isn’t evidence of their continuing mendacity. It is evidence only of our power to imagine.

Asking a question is not a fact. It is just a question. Saying, “Well, how do you explain…” is not evidence; it is just a question. I can’t explain why some people are happier than others, but some are and some are not. The inability to answer a question goes to two things: the limits of our knowledge (what can we know?) and the legitimacy of the question (does it matter?).

Which brings me to the real subject of this essay. Inoculation against preventable diseases.

If you spend any time on the social media you’ve probably seen rants on why you should not have your children vaccinated, or citations to medical reports about the dangers of vaccination that have long been discredited, or essays about chemicals in children’s vaccinations that haven’t been in them for years. Or essays saying that the Centers for Disease Control are issuing reports about the safety of various vaccinations that are mendacious or duplicitous.

I have one friend with an autistic child. She writes, again and again, asking if the vaccination didn’t cause her child to become autistic, what did? She blames it on a mercury compound that may or may not have been in the vaccine her child received.

There has never been any evidence that a child’s vaccine caused autism. None. When they took that mercury compound out of vaccines there was no difference in the rate of autism. None. Her child was born after that mercury compound was removed. She blames it and the Centers for Disease Control nonetheless. If you can’t blame, them, who can you blame?

No second-shooter has ever turned up in Dealy Plaza that day in 1963. No CIA villain has ever been found in the collapse of the WTC. No alien has ever been found walking the desert of the American Southwest looking for his spaceship which the US government has hidden from him and us. And no child got autism from vaccination.

This is one of the classic logical fallacies. The translation is “After this because of this.” One thing happens; another thing happens; you conclude that the first caused the second. Maybe. Maybe not. The fact that Fred checked his email then walked out his front door and was shot by a villain does not mean Fred’s checking his email had anything to do with what the villain did to Fred. It means only that it happened, and then that other thing happened.

And the fact that some people say “why” about a child’s disease doesn’t mean that inoculation caused that disease. It means only that they want to know why it happened. That’s a good question. But blaming a procedure that protects everyone else is not a good answer. Making a child a carrier of contagion by depriving that child of inoculation is not a good answer. It only puts that child, and everyone that child approaches, at greater risk of disease that could otherwise be avoided entirely.