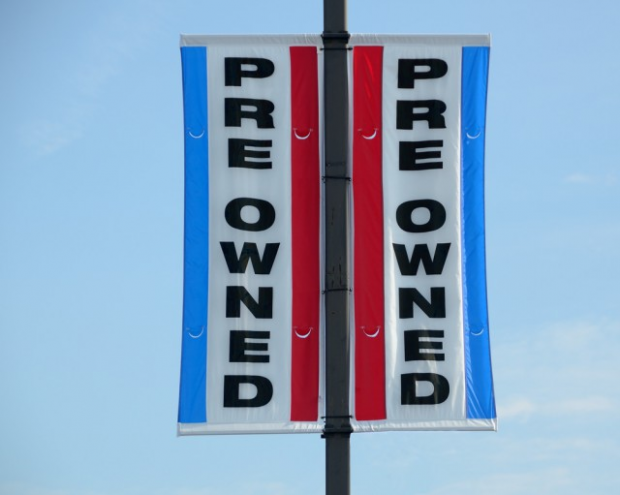 Acquiring used/pre-owned/vintage/antique stuff is a sure-fire sustainable practice. Even a staunch champion of capitalism, manufacturing, and growth can’t argue with the logic. Going for older stuff is also often a harbinger of one’s interest in hand-craftsmanship or old-school manufacturing, processes that were not always environmentally benign, yet were producing rugged goods that could last generations, thus minimizing obsolescence and its inherent waste.

Of course, some stuff you just don’t want used: underwear leaps to mind; socks, bedding, and pretty much anything “intimate”—everyone has their threshold beyond which they’re grossed out. We bought our house used, our three cars, nearly all our artwork, loads of furniture, clothes, rugs, picture frames, chainsaw, snowblower, knives, books, albums, turntable, hot tub, wood stove, and so on. I have no idea if we’re heavy on old stuff or not, but my sense is that most people own all kinds of used things.

Sometimes getting something used veers into collecting vintage stuff, as happened when I got hooked on old kitchen knives by friend and chef John Paa. He owns more than 80 knives, and the carbon steel Sabatier 10-inch he recommended is a cherished item seeing daily use in our house now. Sure, that knife is “used,” and of course “pre-owned,” but it’s also old enough to be considered “vintage,” though not “antique” just yet. I’m fascinated by how we talk about old stuff, especially how items travel between being used, pre-owned, vintage, and antique. PhD theses have explored these categories, and certainly a deeper understanding of them is available beyond this small missive, but there are some basic definitions that can inform one’s approach to acquiring old stuff.

First of all, let’s dispense with “pre-owned.” It’s just a sanitized version of “used” typically assigned to luxury and/or high-ticket items like cars, watches, and yachts. I presume the car industry was looking for a way to sell used cars without sounding like the colloquial used car salesmen, and they also needed a way to sell the influx of vehicles coming out of lease programs. For cars and a few other things, Certified Pre-Owned (CPO) can mean buying from the original dealer, but the key word here is “certified” because, obviously, “certified used” would also be accurate—perhaps more so, as leased cars don’t really have an owner in the traditional sense. Even eBay has a separate categories for “used” and “pre-owned”, which mostly allows sellers to use the term most common in their market. Regardless, “pre-owned” is just fancy-talk for “used.”

For any category, there is some magical age at which an item goes from being “used” to being “vintage.” There is no governing body that decides when something is vintage, though it does seem that is an items has current design and technology then it is used, while previous generations of technology eventually become vintage. Used skis are relatively recent models that have been used, while the stuff I learned on so long ago—laced leather boots and skinny long skis—is now clearly vintage. Clothing, of course, is vintage as soon as it’s cool again, a cycle that can be as short as 10 years in some cases (“vintage” reduces the yuck-factor of used clothes, too). Guitars are vintage at around 20 years, a slowly decreasing number as marketeers grow more savvy and supplies go up, up, up. Vinyl records, while breezily set into “used bins” are alliteratively better as “vintage vinyl,” though we rarely hear that (no idea why). We throw the word “vintage” around somewhat carelessly, but it’s clear that a vintage item is neither an antique nor merely a used thing, at least as we conceive of it.

The broad acceptance for antique status is that the thing has some inherent historical or aesthetic value and is over 100 years old. For cars, however, the Antique Automobile Club of America set the age at just 25 years (though your state’s qualifying age may vary for registration purposes). Guitars seem to become antique at around 100, maybe a bit less. Antique furniture can be used regularly, but often is reserved for formal rooms or untouched displays throughout a home (a sideboard set with an antique tea set, for example). Antique clothes are rarely, if ever, worn, and if significant should probably be sent to a textile museum. Conversely, a lot of antique jewelry tends to be rugged enough to wear centuries after it’s made without harming or devaluing it. The connotations of “antique” seems quite clear and relatively fair: the thing is quite old, somewhat rare, probably valuable, and likely significant in that it represents a long-gone era or tradition of craftsmanship; “antique” also suggests that the thing may require special care, preservation, restoration, or just light use, if any. Perhaps this is why I like to think of that Sabatier knife (approaching 100 years old) as vintage rather than antique, because I use the thing daily.

Strategies for acquiring old stuff will vary with one’s goals. If you just want to save some money, buy used (or pre-owned if dragged into such a rhetorical game). If you’re a collector, you’re likely into vintage or antique stuff. What becomes interesting is when one tries to buy in one category with an eye toward ending up in another category—this is how the game of old stuff gets played, and we’ll look into that more closely for specific categories in coming Body Buzz installments.