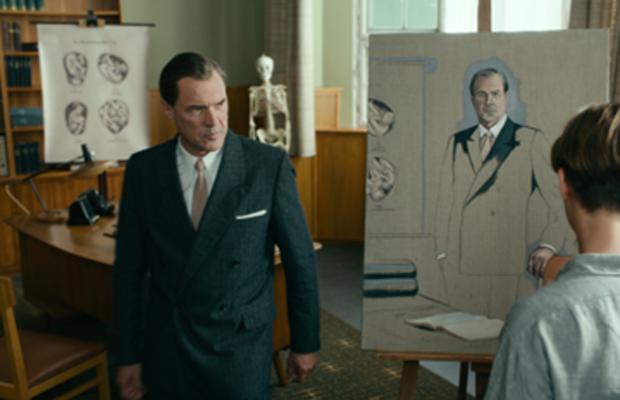 Movies about artists are too often, in the famous phrase, like dancing about architecture. So you should probably ignore anything you’ve heard about Never Look Away, the Oscar-nominated new film by Florian Henckel von Donnersmarck (The Taste of Others) being a roman a clef about the painter Gerhard Richter. There has been some public feuding between the two: You can check it out after you see the movie if you’re a fan of Richter, but otherwise you can ignore it.

And while Never Look Away is in the end a movie about the nature of artistic expression, if that’s not a subject that interests you I can still recommend it as a big, engrossing story about Germany before and after the war that touches on areas that most such films ignore.

Like the current Cold War (also up for the Best Foreign Language Academy Award), Never Look Away is largely set in the years after the Second World War. It begins before that, in Dresden in 1937, with a boy named Kurt taken by his aunt to see a Nazi lecture on the dangers of “degenerate” art. Their secret is that they’re going because the young lady likes this art, a taste she passes on to her nephew.

Kurt adores her for reasons that probably have to do with her mental instability, a trait the Nazis did not see fit to indulge in the Third Reich. Their policy of eugenics is a theme of the first section of the film, giving rise to a few scenes that are painful to watch—as, of course, they should be.

Roughly speaking, the first half of the movie chronicles Kurt’s formative years, through the war and the firebombing of Dresden, the second his attempts to express his feelings about them. As a young man (now played by Tom Schilling), his quest to study painting is repressed by the fact that the ruling Communists have essentially the same utilitarian attitude toward art that the Nazis did. Only when he and his girlfriend (Paula Beer) escape to Dusseldorf in West Germany can he begin to mature, though even there he has to work his way through studies in an avant-garde institute that is mostly a hotbed of shallow egotists (scored, in a nice touch, to the instrumental pop hit of the time “The In Crowd.”)

Kurt’s story is linked and paralleled to that of the man who will become his father-in-law, Professor Carl Seeband (Sebastian Koch), a gynecologist who collaborated with the Nazis. This powerful but deluded doctor portrays the kind of individual susceptible to the Nazi ideology. Like much of the film, he expresses a through line to an aspect of German culture that made the rise of fascism possible.

Abstract as some of its themes are, Never Look Away is an absorbing story that seldom drags despite its length (three hours and nine minutes, if you sit to the end of the closing credits). The production credits are all top-notch, especially the cinematography by Caleb Deschanel and the score by Max Richter, which is so rich that I can forgive Donnersmarck for maybe laying it on thicker that he needed to. Now playing at the Dipson Amherst Theater.

From Iceland, Arctic is a genre film, which is to say a movie where go in with certain expectations of how the story will play out. The genre is the survival story, with Mads Mikkelsen as a man stranded in the desolate snowbound region after his plane crashes. Debuting writer-director Joe Penna, from the most unsnowy country of Brazil, has stripped his story to the barest essence: we don’t know what caused his plane to crash, or how long he has been here, drilling through the ice to catch fish and hand-cranking a radio to send out an SOS signal. We only know his name, Overgård, because it’s embroidered on his jacket.

Overgård seems to be a capable enough fellow, if not quite up to the level of Matt Damon in The Martian. His biggest problem, as we recognize from watching him make yet another meal of raw fish, is boredom. Relief comes in the form of a rescue attempt that fails, leaving him with a badly injured co-pilot (Maria Thelma Smáradóttir) to care for. With help of some maps from her ruined helicopter, he decides that their only hope is for him to try to walk to a research station, pulling his comatose charge on a sledge.

To say that Mikkelsen is the whole film is no exaggeration. It’s fortunate that Penna was able to get an actor up to the challenge, as Mikkelsen possesses that primary quality of a movie star: when he’s onscreen, you can’t take your eyes off him. His performance makes up for what is otherwise the film’s major flaw: There isn’t really a plot, at least not in terms (as we expect in this genre) of action and effect. Overgård does as many things wrong as he does right, perhaps even more: given the lack of dialogue or a narration (even the few times when he talks aloud to himself, it doesn’t tell us much), there are key moments when we don’t know how to interpret what we see him do. And the ending is a disappointment, so arbitrary that it seems to come simply because the film has gone on for as long as Penna cared for it to last. Now playing at the Dipson Eastern Hills Mall Theater.