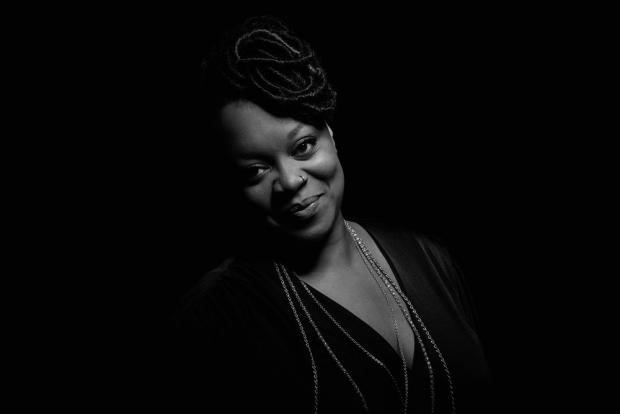 She’s a proud single mother of five from Buffalo who makes a living solely as a musician and now she’s taking on the spirit of Nina Simone. Her name is Drea d’Nur and her vision is to embody the spirit of Nina on stage at Kleinhans Music Hall, the same venue that Nina performed at 53 years ago, in December 1964. But when d’Nur booked the gig, she didn’t know that. Call it divine intervention (that’s what d’Nur calls it), but this journey has lead her down a Nina Simone rabbit hole, as she’s realized the soul singer’s numerous and interesting connections to Buffalo and its music scene. Simone, for those who don’t know, was a soul singer, activist, and compser born in North Carolina in 1933. Not only was Simone as prolific a songwriter as they come—she wrote more than 40 albums during her career—but her music was overflowing with substance. In the 1960s she emerged as a voice for racial equality and civil rights issues on her recordings and in her live performances. As d’Nur says, if there was a soundtrack to the revolution, Nina, who died in 2003, would have the first track. On Friday, February 24, d’Nur will pay tribute to Simone at Kleinhans Music Hall in a show she’s titled “The Spirit of Nina.” But before that, tonight, Wednesday February 22, they’ll have a birthday celebration for Nina Simone at the Burchfield Penney Art Center that will be complete with a screening of a documentary by d’Nur’s about Simone’s life, as well as an art display related to the show. This week we spoke with d’Nur about Nina’s impact on her life, and how she’s preparing for her big night.

Do you remember the first time you heard Nina Simone’s music?
I got into her music probably in college. The first song I heard was “Strange Fruit.” I was familiar with Billie Holiday’s version of “Strange Fruit.” Nina Simone’s voice wasn’t pretty. It wasn’t a voice you listen to like a Whitney Houston or Aretha Franklin. It was just a voice that moved me. I felt her soul and I can identify with that. She paints pictures with her voice like nobody else can do.

What does it feel like preparing to do her music?
I’m honored to be able to share the spirit of Nina Simone with Buffalo. I feel like she’s in me telling me what to do right now. Everything is lining up so divinely. I don’t think anybody can tell this story like me.

How did this show come about?
In 2014 I had a vision. I had a vision of a billboard and the billboard said “Kleinhans Music Hall presents a Tribute to Nina Simone by Drea d’Nur,” and I thought I was crazy, like they’re never going to book me ever. I’m a local artist, I’m a mother of five children, but I’m a full time music artist. No other job. I know that I’m good but I never thought they’d book me. But then this summer I had a moment where I just felt like I was supposed to move forward with this and I had an epiphany and I decided to pursue it anyways. And Kleinhans decided to partner with me on this fantastic project. Everything else has been lining up. I’ve learned that Nina Simone had a direction connection to Buffalo. That she had friends here. That there were people here who watched her children. She performed even at Kleinhans. So this has turned into a film documentary. So I’ll be showing the documentary at the show. The way everything is adding up is just amazing. Just today I found an actual picture of her in Buffalo.

So you learned that Nina played at Kleinhans after you booked this show?
Yes. When I booked the show it was August of 2016. I decided to see if she had performed in Buffalo before so I did a Google search. What came up is a Time Magazine feature that featured pictures by Alfred  Wertheimer, which was Elvis Presley’s photographer. They did a tribute to Nina Simone a couple of years ago and they featured her pictures and all of the pictures are of Nina Simone on her way to Buffalo. Nina Simone on the plane to Buffalo. Nina Simone fresh off the plane in Buffalo. Nina Simone in a hotel in Buffalo. It does not say why she was here, but it did say December 1964, and that’s what lead me to the library, and that’s where I found that in December 1964, those same pictures, Nina Simone came to Buffalo perform at Kleinhans Music Hall, and that’s the moment I realized that this was given to me, that this was divine; that it wasn’t just something I had dreamt up; that it was what Nina Simone wanted me to do.

You had this vision of performing at Kleinhans and then you realized she had done the same thing.
When I realized that she came her for that I literally fell to my knees in the library. I was like “I can not believe this.”

Tell me more about your documentary.
I’m documenting basically the story I just told you and then all of the missing pieces that connect the dots. The documentary is about Nina Simone’s connection to Buffalo. The performance was originally called a Tribute to Nina Simone. Now, I’m not crazy, but I did have this vision where Nina Simone appeared to me in a ghostly way. She wasn’t talking but she was communicating to me and that’s when I knew I had to change the title from A Tribute to Nina Simone to The Spirit of Nina. Her spirit is returning to Buffalo to Kleinhans Music Hall stage after 53 years. During this process I learned that she performed at Buffalo State College, at the Tralf, and that there’s people here, a musician who died a few years ago, Papa Emile Latimer, who we know as a percussionist but he was hired to play the guitar with Nina Simone. He toured with her, he’s on a couple of albums with her. So researching him turned into me meeting people who were friends with her. I interviewed Papa Emile’s daughter. Someone else who I have known in this community for years babysat [Simone’s] daughter. Someone she used to meet up with when she’d stay here, I have an interview with him. I have interviews with all of these people.

Tell me more about Papa Emile.
There’s a live video for the song “Black is the Color of My True Love’s Hair,” if you watch it, Nina Simone is at the piano with all black on and Papa Emile is on the guitar. He comes from behind her and stands in front of her to sing the second verse. Nina Simone, the diva, the high priestess of soul never shares the stage mic with anybody—that was her moment—but she valued him enough to share the spotlight with him. They were friends.

Tell me about the jazz ensemble that you’re going to have at the show.
I basically kinda put together my own ensemble, it’s not like I hired one band. It’s a 10 piece ensemble of some of Buffalo’s greatest musicians. If you’re in the music world you’ll know a lot of these musicians. I also have a mini string section. I have dancers, a wonderful South African dancer. I have another dancer named Robin Hibbert and Robin Hibbert actually danced for Nina Simone when she came to Buffalo. She personally performed Nina Simone’s “Four Women” for Nina Simone along with three other women under the direction of Mr. Steve Porter, who I have also interviewed. Nobody could find him and I found him.

It sounds like this will be a very authentic performance.
Nina Simone was a woman of excellence. This is not a show where you have a bunch of people coming together to do her songs. This is about the spirit of Nina. I don’t look anything like Nina Simone. I’m not tall, I’m not thin, I’m not as dark as her, but I have her spirit. She had a fierceness, she had a boldness, she faced issues that nobody wanted to talk about and she put them in her music. She sang “Mississippi Goddam” at a time when they were lynching people. She really is, if you talk about the revolution and the civil rights movement you automatically think of Dr. King, you think of Rosa Parks, but nobody talks about the music, which was the soundtrack of the revolution. And Nina Simone’s music I would argue would be like one of the first songs on the soundtrack of the revolution.

What should people know about you going into this?
I recorded my first album in Germany, it’s called Day of d’Nur. Beynod my music, I’m a mother of five children. That is the most important thing about me. It’s something that makes me relatable to more people than not.

When you step up on the stage of Kleinhans, how will you channel the spirit of Nina Simone?
When I go into Kleinhans, I was there last week, and she is with me. I’ve already channeled her. When I listen to her music I feel her. She’s already there. It’s like I’m meeting her there. When I get on that stage, she’s already going to be there.