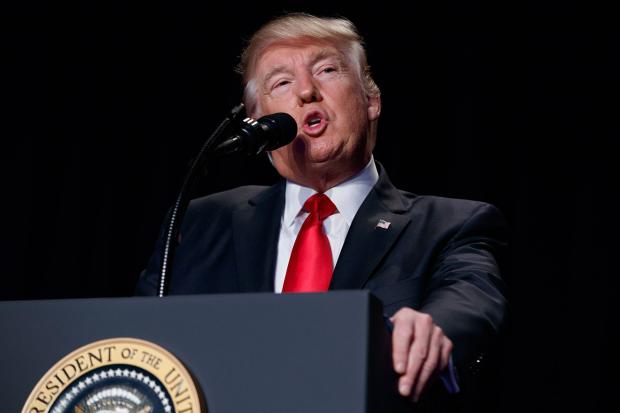 For over a year, Donald Trump has railed against the “Johnson Amendment.”

When he announced Mike Pence would be his running mate last July, he said, “We call it the Johnson Amendment, where you are just absolutely shunned if you’re evangelical, if you want to talk religion, you lose your tax-exempt status.”

Not only does that border on incoherence, but it is wholly untrue. Big surprise.

At the National Prayer Breakfast on February 2, he said, “Jefferson asked, ‘Can the liberties of a nation be secured when we have removed a conviction that these liberties are the gift of god?’ Among those freedoms is the right to worship according to our own beliefs. That is why I will get rid of and totally destroy the Johnson Amendment and allow our representatives of faith to speak freely and without fear of retribution. I will do that.”

The National Prayer Breakfast statement was coherent, so obviously not penned by Trump, but it, too, misstates and distorts the facts.

Falwell was lying, too. The Johnson Amendment has nothing to do with free speech. Nothing.

The Johnson Amendment—named for then-Senator Lyndon B. Johnson— is part of the 1954 tax law. It specifically prohibits all organizations with a 501(c)3 tax-exemption—churches, synagogues, mosques, universities, charitable foundations, arts organizations—from endorsing or opposing political candidates and contributing to political campaigns.

Under the Internal Revenue Code, all section 501(c)(3) organizations are absolutely prohibited from directly or indirectly participating in, or intervening in, any political campaign on behalf of (or in opposition to) any candidate for elective public office. Contributions to political campaign funds or public statements of position (verbal or written) made on behalf of the organization in favor of or in opposition to any candidate for public office clearly violate the prohibition against political campaign activity.  Violating this prohibition may result in denial or revocation of tax-exempt status and the imposition of certain excise taxes.

Which is to say, if you’re operating on money taken out of the tax base, you can’t use that money to influence governmental operations.

This particular exemption permits individuals and corporations to take tax deductions for gifts to a certain group of institutions the tax code defines as working for the public good. It exists as a device to encourage such giving by rerouting those contributions from the funds on which taxable income is based. It also makes income those organizations those organizations receive as gifts non-taxable. It is a free transfer of money, one of the few we have.

If you make $100,000 and have $20,000 in deductions, your tax is based on an income of $80,000. If contributions to the 501(c)3 organization count as legitimate deductions, that is money subtracted from your taxable income, hence it is money that is not taxed.

That unpaid tax resulting from that deduction (unlike just about all other personal and corporate deductions) is the public’s money, not the individual’s or corporation’s. It exists solely because the government has decided that encouraging contributions to those public service organization justifies a reduction in tax paid.

The real game Trump is playing

Nothing in the Johnson Amendment prohibits any person of the cloth or any member of any religious organization from taking part in any kind of personal political activity. Trump insists that it does, as do political evangelists like Graham, but that simply is not true.

The Johnson Amendment does, however, prohibit organizations with that special exemption from doing those things.

Trump, Falwell, et al., argue this violates the organizations’ First Amendment rights. That argument is even more specious than the argument that gave us Citizens United, which allowed corporations to make unlimited contributions to political action committees as if the corporations were individuals.

It would do one other thing even more insidious.

Right now, if a corporation or an individual makes a contribution to a political action committee, it is not deductible from income on which taxes are based. If you give $1,000 to a candidate it is entirely your money, not the portion of your money on which you owe the public tax to help pay for education, roads, military services, weather reports, the government bureaucracy, airport maintenance, and Trump’s weekly flights to Florida to play golf and cut deals.

If the Johnson Amendment is abolished, corporations and individuals could make donations to political candidates, with only a slight detour through a friendly 501(c)3. Without the Johnson Amendment, they and their political interests are getting the advantage of the money not going into the tax stream, and the rest of us are not.

In specific, practical terms, repealing the Johnson Amendment means corporations and individuals can increase their political donations by 40 percent (the current maximum corporate tax rate) without giving up a single penny more than they are spending to buy and sell politicians now.

Since organizations on the left and right could benefit from repeal of Johnson, what’s the problem? Everyone benefits the same, right?

Wrong. As Citizens United showed, large corporate giving is not distributed evenly. It focuses on issues that increase corporate income: candidates who are untroubled by reduced environmental action, candidates more devoted to decreasing taxes on the rich than on the middle class, candidates who will let corporate lawyers write their legislation for them.

Religious organizations that vigorously pursue politicians tend to be those with agendas, like restricting women’s rights, opposing equity in gender issues, and crippling public funding of the arts and humanities. Religious organizations in the middle and the left fight primarily in favor of rights, information, and equity. Their current fight is to defend Constitutional rights, not to undermine them. It is a very skewed game.

Killing the Johnson Amendment would open another avenue for free corporate underwriting of political campaigns. It is Citizens United II.

The measures introduced in the Senate on this issue since Trump’s National Prayer Breakfast rant are mild and not egregiously villainous. But once in, they are easily modified. There’s an old Arab riff Lyndon B. Johnson liked: “If the nose of the camel is in the tent, can the rest of the camel be far behind?”

That’s what this is really about. It doesn’t free church people to talk. They can talk now. It is about opening the door for unlimited gifts to political campaigns by corporations and the very rich. The religious Right is just a pawn in their game. A willing pawn, but a pawn nonetheless. Jerry Falwell, Jr. thinks he’s playing big time. He is being played, as are the rest of us.

Bruce Jackson is SUNY Distinguished Professor and James Agee Professor of American Culture at the University at Buffalo.