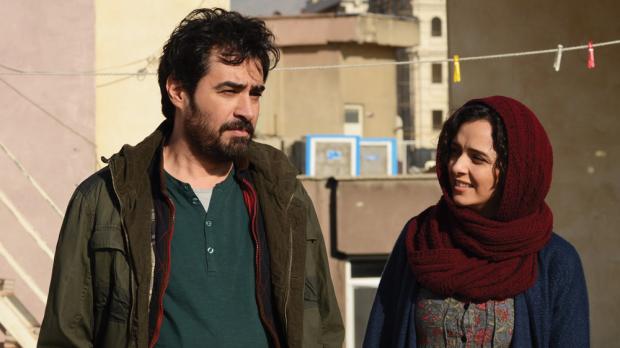 It’s Oscar weekend, which is to say a weekend for a lot of people to grump, “I don’t care, I’ve never even seen any of the nominees.” I understand and sympathize with the fact that so many of the nominated films probably didn’t play in your neighborhood, unless you happen to live close to one of the arthouse theaters that Buffalo is blessed with. (Why you would want to live far from one is up to you; I’ll assume it has to do with school districts or something else over which you have no control.)

The problem here isn’t that the folks at the Academy of Motion Picture Arts and Sciences are getting more esoteric or severe in their tastes; it’s that Hollywood no longer feels it can make enough money to please its shareholders from the kind of human dramas that get Oscars, and therefore pack the megaplexes with stuff for kids. A nominated film that you’ve never heard of, as a rule, is one that you should make a note to check out first chance you get.

For example, there’s The Salesman, opening this Friday at the Eastern Hills Cinema, which gives you three days to see it in order to be able to prognosticate with some degree of authority in the category of Best Foreign Language Film. It is the third of the nominees to have played locally, along with A Man Called Ove and Toni Erdmann (also currently at the Eastern Hills). And while I haven’t seen the other two entries, this is the one I’ll be rooting for on Sunday night.

It is the newest film from the Iranian writer-director Asghar Farhadi, whose 2012 A Separation was the first film from his country to win in the Foreign Language category. If he wins again this year, don’t expect to see him running up to collect it; uncertain whether or not he would be allowed into the United States under the terms of the current administration’s travel restrictions, he has chosen to stay home as a protest.

Which is a shame because, as I often point out, short of spending extended periods of time abroad there may be no better way to break down cultural barriers than to experience the movies that people of other countries make for themselves about themselves. Like A Separation, which chronicled a difficult divorce, The Salesman shows that Iranians have more in common with Americans than some might think.

The film opens with what at first seems to be an earthquake, rattling the apartment building in Tehran where Emad (Shahab Hosseini) and Rana (Taraneh Alidoosti) live. He is a high school teacher, and both of them are actors, currently preparing to star in a production of Death of a Salesman. The damage requires them to find temporary new lodgings.

What they didn’t know about their new place before they moved in was that the previous tenant, whose furnishings are still there, as a prostitute. Or at least so her neighbors assumed; like much else in Farhadi’s stories, there is some uncertainty. One night Emad comes home from a trip to get groceries to find bloodstains on the stairs and floor and Rana missing. She has been taken to the hospital after being attacked, apparently by someone who entered the flat expecting to find their predecessor.

Rana is not seriously injured, but she’s upset: unwilling to be left alone, uncomfortable with Emad’s presence. Wanting to help but frustrated by his wife’s reticence (she won’t go to the police), Emad decides to find the perpetrator himself,

What happens when he does provides the third act of a film that, like the play featured within it, has a conventional dramatic structure, yet one so carefully woven that you’re never aware of the mechanics. As always, Farhadi seems to proceed slowly, almost casually. It isn’t until well into the film (which runs a bit over two hours) that you realize how well and fully he has gripped you. Looking back at it, the film is both satisfying and ambiguous; it resolves some of the more obvious tensions it creates, yet leaves open for discussion others that aren’t immediately apparent. In its oddly quiet and deliberate way, it’s a thrilling film to watch.