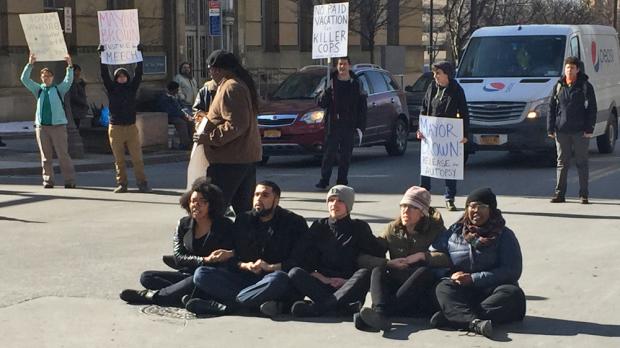 As Mayor Byron Brown continued to deny anything is wrong in the city’s police department, about 100 protesters gathered last Friday at the corner of Franklin and Court streets to demand police accountability and answers to the questions swirling around the death of Wardel “Meech” Davis in handcuffs on the night of February 7.

Meanwhile, Buffalo News reporting of police issues continues to betray a bias in the mayor’s favor.

Some protesters had been inside the Buffalo Niagara Convention Center, where Brown was delivering his annual State of the City address, during which the only mention of his police force was to announce that new substations would be established at Canalside and at Broadway-Fillmore.

While Brown announced his fourth bid for mayor on Monday, his police department has come under criticism everywhere but the Buffalo News for a constitutionally dubious pattern of arrests, a zero tolerance policy which disproportionately affects minority neighborhoods, lack of de-escalation training, a dysfunctional internal disciplinary practice, and a minority community that mistrusts police such that many say they don’t call police in an emergency.

Just last month, Byron Brown told The Public when asked whether policing in Buffalo was headed for a crisis, “Let’s be the good story. Let’s talk about the good things that are happening here as opposed to trying to be part of the story when negative things happen in other parts of the country.”

Yet while Wardel Davis’s death should be putting an end to the mayor’s ability to insist all his hunky-dory in copland, complicit reporting by the area’s strongest and by far largest news company continues to provide police and the mayor cover.

Cariol Horne was one of seven protesters who was arrested for shutting down the intersection on Friday. The Buffalo News’s report by Sue Schulman includes only this about Horne:

Horne was dismissed from the Buffalo police department in 2008 with 19 years on the job after being brought up on departmental disciplinary charges. She had allegedly jumped on the back of another police officer while he was making an arrest. She claimed the officer was allegedly choking the man he was arresting.

Horne was found guilty by an arbitrator and fired.

The News didn’t think it was relevant to include that the officer whose back she jumped on, Gregory Kwiatkowski, pled guilty only two months ago to police brutality charges stemming from a 2009 incident where he shot youths with a BB gun. Making matters worse, Kwiatkowski admitted under sworn testimony that Horne never jumped on her back. Horne stopped him from choking a handcuffed man, and for that Horne claims that Kwiatkowski punched her in the mouth, causing injury.

Horne has been unable to recover her pension as a result of her termination from the police force. Kwiatkowski retired in 2011 in his mid-40s while under investigation for multiple cases of abuse. The News doesn’t think it matters, apparently, that one of the people protesting police brutality may have extensive experience on the matter.

From the beginning of the Wardel Davis case, the News has offered the police narrative of what happened to Davis as fact—namely, that he “battled” or “struggled” with police, without ever establishing how that fact could have been established or corroborated except by police sources. The headline for the first story claimed Davis died “after battling with police.” This past Sunday’s comprehensive report on the case included a passage that says Meech “knew the two officers he struggled with on the night of Feb. 7, as previously reported in The News.”

News reporters Lou Michel and Maki Becker have not yet responded to The Public’s attempts to gain clarification on their sourcing.

While there are hints that there are witnesses who saw police beating Davis but are reluctant to come forward out of fear of police reprisal, we don’t know if Meech fought back at all.

“In this case, there’s witnesses who saw the police beating on Meech,” Cariol Horne told The Public, echoing what attorney Steve Cohen, who is representing the interests of the deceased, has been saying to the media. “So if these people saw him being beat,” Horne said, “but they’re afraid to come forward, then the police department is pretty much going to make their own scenario.”

FOIA requests filed by The Public with the city’s communications office for information related to the Davis case have received no response. A FOIA request made by Investigative Post seeking police reports and 911 call records yielded only an incident report from the Buffalo Police Department. Much of that same information sought by both The Public and Investigative Post was apparently shared by an unknown source with the Buffalo News and published on Sunday.

The News’s Sunday report on Davis included a bit of information that bears all the hallmarks of a stop-and-frisk arrest:

Five days later, Davis was arrested again on Grant Street at Hampshire Street by two other police officers. He was accused of “loitering” near Bill’s Corner store, according to a police report.

“Upon further investigation, defendant had 18 bags of marijuana in his possession,” the report said.

Loitering is a rarely enforced law with an ugly and racially charged history. It’s still on the books in New York, but limited to visual observation of petty criminality: gambling, prostitution, bothering people in a bus station.

Steven Jackson, another one of the protesters arrested on Friday, told The Public, “Stop-and-frisk is a policy that supposedly was discontinued nationwide, but still runs rampantly throughout Buffalo. This recent case has made that clear. We need more people standing up, speaking up so these things don’t continue. Buffalo, for such a city of good neighbors, we need to act like it, right?”

Stevens was one of two protesters who received an extra resisting arrest charge on top of disorderly conduct.

Yet in 2014, Police Commissioner Daniel Derenda offered the Buffalo Common Council contradictory statements that he doesn’t “believe” his officers use stop-and-frisk tactics but that he was “sure” that some officers have.

Cariol Horne insisted that stop-and-frisk is in wide use in Buffalo, and reacted to the semantics of Brown’s statement. “If they don’t call it stop-and- frisk, they call it another name,” she said. “So now he’s playing on words. Let’s see how many people have been charged with the trilogy, which is: resisting arrest, harassment, and obstructing. It’s like, ‘Oh, we told him to move and he didn’t move.’ Okay, well what was this person doing?”

Last December, a federal judge came to a similar conclusion about the details of the arrest of Arthur Jordan, Jr. In that case, four officers  confronted Jordan in a store. Jordan was wanted for questioning by the FBI over threatening statements he had made on Facebook, but there was no warrant or 911 call made about Jordan at the time. When Jordan refused to comply with police requests to go with them, officers slowly closed on Jordan in the store and found a gun in his back pocket.

When the video and facts of the arrest were made clear during a suppression hearing, Judge H. Kenneth Schroeder objected strongly to the government’s case.

“Are you familiar with the City of New York stop-and-frisk laws that got shot down, where the police said, well, we have a right to walk up and just stop someone and frisk them?” the judge asked government attorney Wei Xiang.

At another point in the hearing, Schroeder continued his objection: “You know down South they used to have those kinds of laws called loitering. And they were found to be unconstitutional. And they were profiling laws.”

Justin Sondel, a freelance investigative reporter based in Buffalo, contributed to this story.