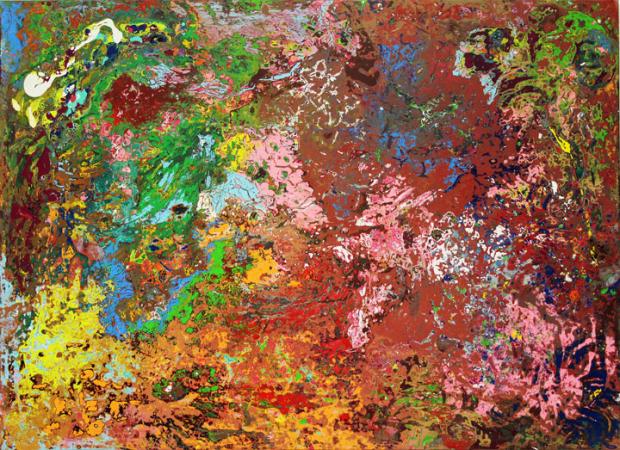 In addition to his plethora output of individual works—some 600 of his paintings are in some 70 museums throughout the country—Charles Clough is a collaborative artist. His latest realized project is a painting and book about the painting—both entitled Autumn 2016—including portrait photos of the 48 participant painters—most of whom would probably not first and foremost have identified themselves as artists—who worked on it, and documentation of their individual contributions. It’s a book about the work in two senses. About the painting and the process.

This collaborative work not unrelated to the impulse that inspired Clough’s other major life’s work—other than his art—as one of the founders of the Hallwalls organization. Incidentally a gallery, more essentially an arts community. A collection if not quite collective of artists interacting. (And still going strong after half a century—though yet to be determined the fiscal effects on Hallwalls and other such institutions of the new federal administration’s patent fear and loathing of art and ideas. Of truth if not beauty.)

The book chronicles the various stages of the painting over the 2016 fall season. Fifteen stages or states, as Clough calls them, of the work after that many painting sessions by one to several painters per session. Layer upon layer of latex paint on a single sturdy PVC board of dimensions 32 by 44 inches. The individual contributions ranging in application methods from drip or pour to finger technique further paint manipulation—with actual fingers or a Clough invention “big finger” pad on a stick—and stylistically from representational—a little red car on a roadway, happy sun in the sky—to abstract. Interim states reminiscent of Pollock or alternately de Kooning. Then a final series of grindings with power sander—by Clough—exposing paint underlayers. Toward ultimate product galaxies of color bits and patterns, against a painterly dense cosmos.

Autumn 2016 is the fifth of the seasonal collaborative works, with plans to keep the project going. “The problem is getting participants,” Clough said. “People are enthusiastic when they hear about the project. But then it’s hard getting them to actually show up and paint.” The painting is done at his studio in East Aurora on the Roycroft Campus—in the old Printing Shop building—and he resides at the moment just a few doors away, “so people can come and paint pretty much at their convenience,” he said. “They just have to call me up, and if I’m not already in the studio, I can be there in five minutes.” One painting session a day, to allow the previous session paint to dry. And a session takes “anywhere from fifteen minutes to however long participants want to hang around the studio and visit and talk,” he said.

About pretty much anything. But particularly art, art history, theory, and practice. About being an artist—what that’s like—starting out at Hutch Tech, then stints at Pratt Institute and the Ontario College of Art—with the idea maybe to become an illustrator, maybe go into advertising. Then heroic decision—for better or worse, and a little surprising, it seems, when it happens—to become a professional artist. Not well-known to be a lucrative profession necessarily.

Clough said something he learned and always remembers from one of his art instructors at Pratt was four key practices for becoming an artist. Visit other artists’ studios and talk to the artists, go to galleries and see lots of art, do your own work, and read. Along one wall of his studio is a bookshelf full of his books. His personal art library.

There’s a fee to participate in the seasonal works project, but nobody who wants to participate is turned away, as a matter of Clough principle, but also currently thanks to a grant to the artist from the Guggenheim Foundation.

Included in the book are portrait photos of all the painter participants, arrayed in conjunction with their individual or small group work on the painting—the state each painting session produced—and a monotype painting each painter produced either by impression—by pressing an eight-by-10-inch PVC board onto the fresh paint of their state work—or as an original work unrelated to the main event painting.

Part of the idea with the portraits, Clough said, was “to confer an August Sander quality on the project.” Sander was a German photographer in the early to mid 20th century who endeavored to make portrait photos of a complete range of national character types and trades and professions. Much of his oeuvre was destroyed by the Nazis.

Anyone wishing to participate in the current or future collaborative work should call Charlie Clough at 646-283-6964. Or email him, charlie@clufff.com (note, three f’s).