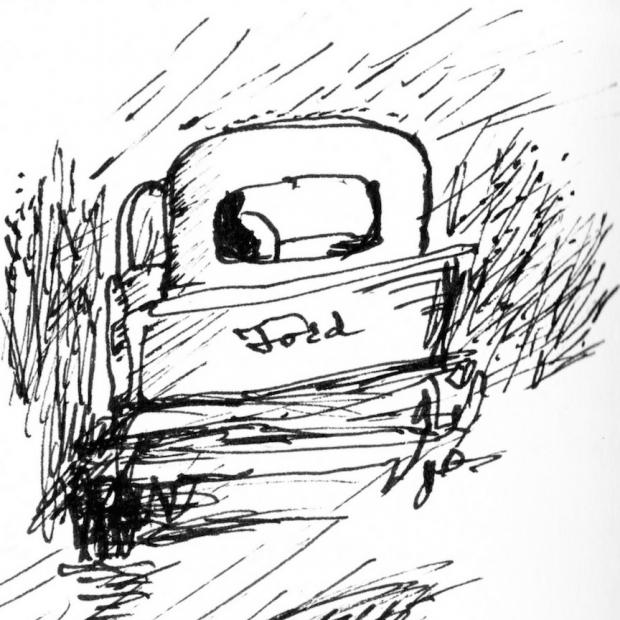 The ground had cracked with the bitter cold of late January in the farm fields of Missouri. Clutching my shiny new burp gun from Christmas only weeks ago, alone, I played Korea…not but two years since the stalemate in Panmunjom. Even in a slight breeze the air stung, made it hard to keep my eyes open, but the will to play Korea with my new gun was stronger than the weather. The resident farm implements became wrecked Russian T-4s. I rolled into a ditch at the imaginary burst of a Chi-Com machinegun. I leveled my weapon, released the lever, pulled the trigger, and heard a resounding tak, tak, tak! as I heaved a clump of dirt, grenade-like, into the yawning bin of a rusting combine.

Bare whisps of snow flakes urged me to rise and move up and past the barn, all the while training my sights on the second-floor windows, emembering how my nncle had shot crows perched on the roof line with his M-1 carbine, standing in his tractor, the spent cartridges rattling off the fender skirts. The snow was gradually developing a muted presence. Breaking character, I set my burp gun on a milk can, clapped my mittened hands together, and debated, as a 10-year-old boy debates, whether to continue my war play or beat it back to the house. My too large helmet liner whistled around my ears…the wind whispered in the creak of barn timbers now some yards behinds me. A prickling sensation caused me to look directly in front of me. Just ahead a 1941 Ford pickup stood on blocks rusting in a stand of bracken. In past summers my younger brother and I would have played aircraft games in the truck cab, ignoring the huge steering wheel, inspired to pretend we were Terry and the Pirates flying “over the hump” in a C-47.

Somehow in the snow the truck was different. The roof of the cab, coated like white frosting, seemed to grow. Only the rear window gave certainty to its form. My view into the cab from behind the truck bed, with its errant corn cobs frozen in place, showed a dark mass on the driver’s side. I stared, my toy gunplay forgotten. The shape didn’t move. Another gust of wind brought me to an immediate dread as it caught the pickup’s remaining rust-sprung door, swinging it gaping open. I stepped through the crackling bracken stalks and in a wide arc moved to the driver’s side of the cab. There incredibly a young man sat upright staring straight ahead. Like a magnet he pulled me closer until his unreal deadness pulsed in my ears. Unconsciously I dropped my burp gun and mimicked his pose, my hands stuck in my armpits as his were stuck in the armpits of his field jacket His lank hair was frozen in a Brill Cream wave. An empty vodka bottle lay on the running board.

In a moment of witness before I dropped my gun and ran heedless back to the house, I realized I recognized him: one of the number of hired men my Dad Em gave work during haying season. More than once I had sat next to him among other war vets that last August. I remembered he had such clean hands—what Dad Em had called “city hands.”