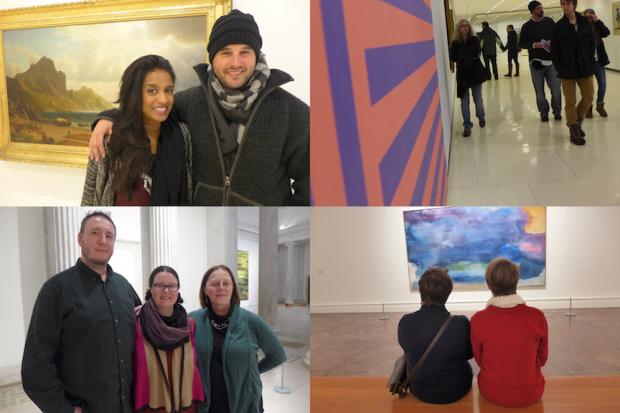 In a gush of largesse, Albright-Knox Art Gallery waived admission for any resident of Erie County during the week of February 10-15, coinciding with the closing days of the poetical color field exhibition by American painter Helen Frankenthaler and an abstract retrospective by painter Paul Feeley. The gallery staff, board of directors, and County Executive Mark Poloncarz meant this as a gift for those who help to fund the cultural site—the tax-paying public.

Visiting the venerable arts org on Valentine’s Day, it was immediately obvious that, despite the sub-zero temperature outdoors, throngs headed here for visual pleasure. The Public spoke to several about their gratis experience that afternoon: AKAG staffers, wide-eyed first-timers, and reverent regulars.

Working the front desk at the Elmwood Avenue entrance was ever-vibrant Gretchan Grobe, asking incoming visitors if this they were residents of Erie County, and if they’d parked in the adjacent gallery lot. Admission might have been complimentary for those domiciled in Erie County, but everyone had to pay to park.

“This is a wonderful way to get people in here, and to discover how great this gallery is,” Gretchan said. Next to her, an artist who is “an avid reader of The Public” but who would not go on record, said that there was a huge surge in attendance during the week, but that his calculations might be imprecise.

Around the corner, admiring The Marina Piccola, Capri, an oil by Albert Bierstadt from 1859, were Sonia Timothy and Alex Ritchie. “I fell in love with this painting,” Sonia said, “and I love the juxtaposition of all abstract forms in all of this work nearby. There’s a lot for the eye to feast on.” Alex added: “My favorite thing to do is to look at the years in which a piece of artwork was made and think of grandparents, or an older generation, when it was made, and how you can still relate to it today.” This was her first time visiting the gallery; he has been here before.

First-timer Sam LaMancuso, visiting from Jamestown, sayid that he’s “driven by here many times and never knew much about what was inside. I’m looking at this painting and imagining what the people in it are staring at over the railing, what they could be thinking about.” The work, a 19th-century oil sketch for a later painting by Caillebotte, shows people walking across, and stopped along, a Parisian bridge.

Leah Meyers was last at the gallery as a child, she said, and was wandering the hallways with Skott Schoonover who has been living in Buffalo for two years, a Southern California transplant. “I just walked in the door,” he says, and was unsure about what was exhibited ahead, but he was already impressed. In the nearby AKAG gift shop Tori Claflin reports that the “energy in the gallery feels like a First Friday. It’s been a positive all week.” A woman was in the process of purchasing a stack of postcards, reproductions of what she’d just seen.

Jennifer Graham, her mom Terry Graham, and her beau Scott Smith, were spotted near the new sculptural installation by David Adamo. All seasoned AKAG visitors, they were enjoying those new to the place, overhearing, “This is really cool,” and, “Which way do we go?”

“I saw the Frankenthaler show several weeks ago and I was so happy to bring a couple more people to share my love for it,” Terry said.

Within the Frankenthaler show, on a bench before Riverhead from 1963, were contemplative Jessie Allen (in Valentine’s Day red) and Alexis Thatcher. This was a repeat viewing for them both. “I genuinely appreciate this free visit,” Jessie said, “especially since you don’t have to be privileged to be here right now.”