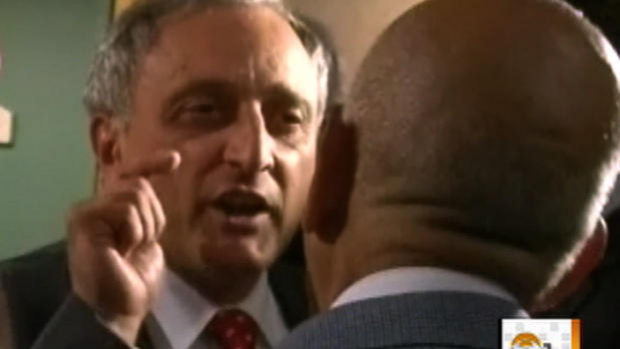 The Paladino descent into self-parody continues apace, as he opens up yet another front in his relentless war on everyone.

Last week, Gary Orfield, a UCLA professor and head of its Civil Rights Project, complained to the federal Department of Education’s Office of Civil Rights about Paladino’s efforts to dictate to and intimidate Orfield and his group. Orfield is not Paladino’s employee, but the head of an organization that the Buffalo school board retained to investigate complaints of racial discrimination in criterion school admissions. Orfield had strongly urged the board majority, including Paladino, to holf off on committing to any charter plans for the four “failing” schools until his group could finish its work and issue its recommendations.

Orfield’s complaint to the OCR was made public, and apparently threw Paladino into a rage. His skin is far too thin to tolerate any criticism, however mild. So, he fired off an intemperate, now-irrelevant letter to the OCR blasting Orfield. Most of it is just an ad hominem attack against Orfield.

Witness the reaction of a man whose companies rent space to — and profit from — charter schools:

Mr. Blanchard, this is in response to an uninformed Buffalo News editorial and Gary Orfield’s letter to you dated February 10, 2015. I am writing as an individual member of the Buffalo Board of Education, (BOE) and I speak only for myself.

Contrary to Orfield’s letter, I am not the Chairman or leader of the BOE, however, I am a member who is incapable of being cowed by an academic elitist who knows nothing about our BOE’s reform intentions and actually seeks to have you admonish me and delay the implementation of our reform agenda. I intend to do what I was elected to do.

Orfield has an MA and PhD in political science. He appears to be a self-absorbed charlatan. He is not a person conducting a study, but rather an activist anti-charter zealot. He is an advocacy researcher, not an unbiased researcher. He is a paid lobbyist who uses Harvard and UCLA after his name because he admires himself much like Jonathan Gruber the MIT professor who wrote Obamacare.

Orfield purportedly was selected by a Buffalo Public Schools (BPS) committee because he was the cheaper of the two people who responded to the RFP. Actually I suspect a much more sinister process took place. Apparently, as has been past practice, no one from the BPS bothered to Google Orfield or look beyond his self-serving and deceitful response to the RFP to see who he really was. Appearances are he is a plant on a mission commissioned by the BOE minority to delay and frustrate the implementation of the reform agenda.

Orfield holds himself out as a “published anti-charter expert and noted speaker.” He ascribes an astonishing fraction of America’s educational failings to America’s obvious lack of “civil rights” in the public schools. He is known as the “segregation professor.” He has been accused of “breathtaking intellectual dishonesty.” He lobbies for busing and stands and speaks extensively against neighborhood schools and charters claiming they create segregation. See attached. He refers to New York schools as Apartheid schools. He supports “social passing-feels that testing is a means to force children out of schools. He has a predisposition to find segregation everywhere, especially in New York. He lacks any discernible objectivity. When considering the requirements of the RFP, he has fraudulently presented himself. Why would the BOE imagine hiring someone who intends to impose his socialist will on the District?

Buffalo’s only civil rights issue comes in the form of the desperate attitude of the BOE minority which consistently plays the race card for lack of any plausible argument against the reform agenda. They were the majority until this year and on their watch the BPS slid into the abyss of total dysfunction. The people of Buffalo voted overwhelmingly for change and reform installing the new majority. Self -empowerment and the ability to control money and jobs is more important to the minority than ending the urban cycle of poverty and giving 34,000 kids a fair opportunity for education no matter what the vehicle, which ironically is the mission of the BOE majority’s reform agenda.

Orfield lacks any objectivity and when considering the requirements of the RFP, he has fraudulently presented himself. We can expect him to include in any report he prepares language that would exclude any Charter School considerations.

Orfield’s letter to you illustrates that he intends to use the Buffalo Public Schools as his Petri dish for his socialistic social re-engineering. He concludes that obviously the BOE majority could not possibly have good intentions for minority children, an insulting and racist remark that illustrates his lack of objectivity. The majority’s reform plan was being prepared when the misguided complaint of the District Parent Coordinating Council (DPCC) was filed with the Office of Civil Rights (OCR.) Knowing what they know today about the majority’s intentions, I expect that the DPCC would agree to withdraw their complaint.

The majority’s plan specifically addresses compliance with the “No Child Left Behind” legislation by using an array of vehicles to create seats in performing schools for implementation in 2015. It is shameful for Orfield to suggest that our children must suffer in underperforming schools for another school year so that he can finish his report sometime in the future.

The BOE majority seeks to correct bad policies administered in the past by the BOE minority when they controlled the majority together with an incompetent Superintendent which resulted in the conditions addressed in the complaint. We have 46 out of 57 schools failing. Our overall proficiencies in Math and English are approximately 10%. There are over 27,000 kids in failing schools who need to be relocated to performing schools. The suburbs and Catholics are closing schools for lack of students. High quality charters want to expand. We filled every seat in the performing schools and we now seek to expand or duplicate them. Is OCR going to delay these good efforts for another year to satisfy Orfield?

Orfield’s fraud in the inception of his contract and belligerency in trying to delay and frustrate the reform intentions of the BOE majority are not tolerable.

I will move to terminate his contract at the next meeting of the BOE.

Fraud? Orfield should sue for defamation — fraud is a crime, and Paladino should prove that up.

Query: the BOE’s minority-as prior-majority presided over not only the “failing” schools, but the “performing” ones, too. There are myriad reasons why the underperforming schools can’t seem to educate or graduate kids, but blaming it all on the BOE minority or the teachers’ union misses the mark.

“Petri dish for his socialistic social re-engineering” what on Earth does that even mean? This stems from Paladino figuring out that Orfield isn’t a Paladino clone anti-SAFE Act tea party activist, and is therefore a socialist. “Self-absorbed charlatan”, “activist anti-Charter zealot”, “sinister process”. Orfield has the nerve to oppose racial segregation, and this apparently sets Paladino into a rage.

Note the very careful, repeated (improper) use of the word “socialist”—Paladino uses “socialist” as an adjective for someone who opposes racial segregation. It bears mentioning, then, that Paladino is rather expressly advocating for illegal racial segregation; integration is “socialist social re-engineering”.

Following up on his intemperate segregationist rant, Paladino reproduces an article written by a xenophobic conservative activist slamming Orfield. He then reproduced a laundry list of things that Orfield has said or written about a variety of topics in order to establish that Orfield is a liberal academic who has the nerve to disagree with positions that Paladino holds. If you’re interested, you can visit a local tea party website and see the whole thing: it is basically a compendium of ad hominem attacks and character assassination by a state official against an academic who dared to raise an objection. Who cares if Orfield didn’t like John Ashcroft? Who cares if Orfield is a Democrat or a liberal? To Paladino, that alone is enough to disqualify anything from anything.

Except, of course, for the Democrats whom Paladino supports.

That is the danger of all of this. While it’s arguably okay for private citizen Carl Paladino to hurl his hateful invective at anyone who dares to even mildly disagree with his dogma, Paladino is an elected city official. Not only does he owe the schools a fiduciary duty to act in the best interests of all students, but if he decides—as a city official—to issue fatwas and wage jihad against everyone who dares to threaten or thwart his thinly veiled efforts to privatize and profit from schools, Constitutional and civil rights issues suddenly arise.

Perhaps more chilling than Paladino’s own efforts to defame and censor a critic, the Buffalo News’ editorial page gently chides Paladino for his behavior. The News has been a friend to charter schools, so its tsk-tsk tone is to be expected; however, the Buffalo News gets everything right except two: that Paladino sincerely wants to help, and that he can be a force for positive change. There is no evidence of the former, and while he could be a “force for positive change”, he’ll have to start acting like a responsible adult and less like a petulant toddler. The News says that Paladino sets back his own goals if he “self-destructs”. Unfortunately, self-destruction is what Paladino does. No one is as good at it as he.

Let the anti-intellectual insult follies continue, I guess. But it’s 2015 and reversion to what arguably worked in the 1930s isn’t the way forward.