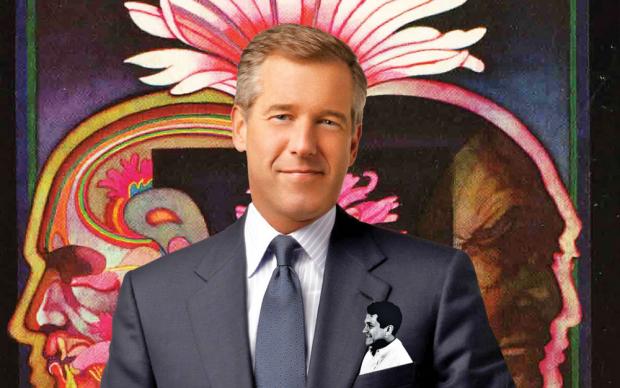 A few years back I invited a controversial popular blogger as a guest speaker in my Alternative Media class. The students wanted to talk to him about recent press reports accusing him of regularly getting his facts wrong, usually to the advantage of politicians who bought paid ads on his site. In class, to the shock of the students, the blogger defended himself, telling the students that he gets his facts right “over 90 percent of the time.” The shock came because any student of journalism knows that anything less than 100 percent accuracy is a failure in the world of journalism, where your professional worth is entwined with your credibility as an accurate reporter.

I mention this story because the ongoing controversy over NBC Nightly News host Brian Williams’s transgressions from reality has opened a dark, gaping hole piercing the veil of credibility in which much of the media has unduly shrouded themselves for years.

The dog ate my peyote

Williams appears to be a liar. He fabricates realities that never occurred and reports them as having happened. Much like “the dog ate my homework.” In doing so he follows a long tradition of excellent creative writers. The problem is when these creative minds pass off their fiction as journalism—or academic fieldwork, as in the classic case of Carlos Castaneda. Castaneda was a cultural anthropologist, famous for his popular series of books chronicling his peyote-fueled apprenticeship under Yaqui shaman, don Juan Matus.

This body of work earned him MA and PhD degrees from UCLA, with the University of California Press introducing his work to the world, publishing his first and now classic book, The Teachings of Don Juan: A Yaqui Way of Knowledge, in 1968. The problem is that there is no evidence that don Juan ever existed, and lots of evidence that Castaneda fabricated his fieldwork, passing off fiction as academic fieldwork. In doing so he created a false record about Yaqui culture. Like Williams’s work, Castaneda created and propagated a lie.

It only took a few years for other anthropologists to expose Castaneda and his fabrications. Whether or not don Juan was a shaman who walked the earth or a figment of Castaneda’s brilliant imagination didn’t seem to matter much to his audience, however. Castaneda’s books continued as best-sellers for decades, finding a built-in audience that gestated with the psychedelic era.

When confronted with a truth that diverged from that which he reported, Castaneda defended himself by arguing that he had crossed over into a different reality—purportedly different from the quantifiable physical reality that most of us inhabit. For his fans, brains alit with peyote, this was good enough.

Brian Williams claims that his lies gestated in that blurry space between his memories and the divergent reality offered by the physical record and the memories of the rest of the world. Hence, like Castaneda’s lies, they’re not lies. They just stem from a reality other than the one that the rest of us inhabit. And unlike Castaneda’s reality, we can’t just eat some peyote and go with the flow. Perhaps Williams crossed over into a parallel universe much like Castaneda’s different reality. It doesn’t matter. What they reported didn’t happen in this universe.

It doesn’t really matter if Williams is an outright liar like Carlos Castaneda, or whether he is cognitively impaired, confusing hallucinations, dreams, or other people’s narratives with his own memories. The end result is the same. A trusted reporter is manufacturing a false reality, undermining our understanding of the world.

While the Castaneda story is an interesting footnote to mid-20thcentury anthropology, Castaneda was just that, a footnote, an outlier who didn’t represent the field of anthropology or undermine its credibility. The Brian Williams story is much more disturbing. For Williams, falsely claiming that he was in a helicopter that was struck by a missile in Iraq in 2003 was just one more departure from the reality that the rest of us inherit. But unlike Castaneda, Williams was able to report falsehoods for years, unabated and mostly unchallenged. More shocking is how, when finally busted, others felt compelled to join him in his dark hole, twisting and squirming to defend and excuse what they write off as a normal faulty memory.

It’s in the defenses of Williams, a lying journalist, that a larger problem is emerging. Bob Wright, the past chair of NBC Universal, quickly came to Williams’s aid, arguing that the disgraced journalist should return to the air, telling the New York Post (2/9/15) that overall, Williams “has helped NBC News.” In a shockingly truthful revelation, Wright expanded on Williams’s worth to NBC, not as a truthful journalist but apparently as a well placed propagandist, explaining that he “has been the strongest supporter of the military of any of the news players.”

While I’d argue that Williams had lots of competition from other compliant journalists in the corporate press, his reporting from Iraq was often inaccurate, omitting embarrassing details while echoing official falsehoods. Wright went on to explain that Williams’ support of the military meant that, as a journalist, “He never comes back with negative stories,” and “he wouldn’t question if we’re spending too much [on the military].” Williams might have suffered from chronic confusion about reality, but in Iraq, his confusion seems to have left his masters well pleased.

Saved from the zombie apocalypse

Williams also deviated into an alternate reality while talking about Hurricane Katrina, repeatedly painting a false picture of violent mayhem in New Orleans. He claimed to see a dead body float by his French Quarter hotel, but the French Quarter wasn’t under water. He told tale of his hotel being overrun by gangs, and of having to rescued from these imaginary gangs “in the stairwell of a five-star hotel.” Not true. A year after Katrina, he told the Los Angeles Times, “I saw fear, I saw death, I saw depravity, I saw firearms being brandished, I saw looting.”

Williams’s narrative painting New Orleans as suffering a sort of zombie apocalypse, like much of his Iraq reporting, wasn’t unique. It represented the common narrative that the corporate media propagated. This is the storyline that spread fear to the region, contributing to real deaths as frightened police officers, possibly crippled by their own racism, mistook New Orleans flood victims crossing a bridge out of the city to high ground as threats worthy of shooting in cold blood. The same narrative dissuaded some rescuers from venturing into the flooded city.

Only after the floodwaters receded and the media quieted down did evidence emerge documenting just how wrong this narrative of violent mayhem was. Bodies riddled by bullets never surfaced. There never were mass rapes in the Superdome. In fact, as Rebecca Solnit documents in her book, A Paradise Built in Hell: The Extraordinary Communities That Arise in Disaster, New Orleans residents, faced with Katrina’s floods and their aftermath, mostly created a remarkable model of leaderless cooperation, with the real narrative peppered with selfless heroic acts of beauty. Crime during the disaster all but disappeared, despite what Williams may have told us.

Williams’s false narrative from Iraq exaggerating his placement in harm’s way is essentially similar to his stories about New Orleans. His reality twists and turns to place him at the center of danger, much like a story that an entertaining drunk or an insecure date would tell. But it’s not just Williams. Such embellishments are common in journalism, from your local paper’s angry white male columnist reporting from the “hard streets” of the city, to the obedient war reporter echoing official narratives. It all paints a decontextualized world alight with danger and overly simplistic solutions—comfortably placing TV news within the TV entertainment frame. At the end of the day, Williams’s former boss, Bob Wright, also praised his New Orleans coverage for being “a very important factor in drawing attention to New Orleans,” albeit, I’d add, for all the wrong reasons.

My Car Got Hit By Rocket Fire at Wegmans

Memory is a weird thing. Two presidential hopefuls, Paul Ryan and Rand Paul, both remember graduating college, but they didn’t (though Duke University apparently went on to admit the non-graduate Paul into medical school). With Brian Williams, the further the timeline moved on from the events he fabricated or embellished, the more his fibs grew. Now we’re suffering viral media memes explaining away these lies as just fallacies of human memory. Granted, we all forget things. That’s why journalists carry notepads and digital recorders.

The issue here is not about forgetting things that have happened. It’s about remembering things that haven’t happened, and mysteriously sticking with that hallucination despite the lack of a physical record. People who have actually graduated from college, for example, would not just have memories of celebratory dinners or parties but a paper degree as well. A journalist whose helicopter, or car, for that matter, got hit by a rocket, would probably take some notes. It’s understandable that someone would mistake where in the supermarket lot they parked their car. It’s profoundly strange to mistakenly remember that car getting hit by rocket-fire.

A journalist, like a police officer, a scholar conducting fieldwork, or anyone with the responsibility to create reliable data based on their observations, must be an accurate reporter as democracies rely on them to inform electorates, and societies depend on them to contribute to a historical record. Williams, like Castaneda, might make it as a brilliant fiction writer, but remembering things that didn’t happen is not a disability that can be accommodated in the field of journalism, just like a blind person cannot be a bus driver.