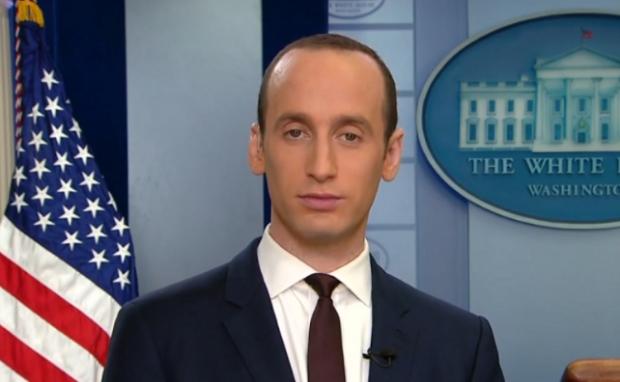 The intragovernmental tug-of-war over Presidential power is as old as the republic; there’s nothing new under the sun. In recent days, however, President Trump’s band of malignant sycophants and apologists have declared that the President wields some sort of supreme power over matters relating to immigration and whatever he deems, “national security” — power so all-consuming and superior that not even the courts have the right to review it.

To examine these claims, we turn to the courts themselves, and juxtapose the law concerning our uniquely American system of government with three co-equal branches, with the authoritarian claptrap from the haphazard oligarchs who discuss national security matters over dinner at Mar-a-Lago.

The Government contends that the district court lacked authority to enjoin enforcement of the Executive Order because the President has “unreviewable authority to suspend the admission of any class of aliens.” The Government does not merely argue that courts owe substantial deference to the immigration and national security policy determinations of the political branches—an uncontroversial principle that is well-grounded in our jurisprudence. See, e.g., Cardenas v. United States, 826 F.3d 1164, 1169 (9th Cir. 2016) (recognizing that “the power to expel or exclude aliens [is] a fundamental sovereign attribute exercised by the Government’s political departments largely immune from judicial control” (quoting Fiallo v. Bell, 430 U.S. 787, 792 (1977))); see also Holder v. Humanitarian Law Project, 561 U.S. 1, 33-34 (2010) (explaining that courts should defer to the political branches with respect to national security and foreign relations). Instead, the Government has taken the position that the President’s decisions about immigration policy, particularly when motivated by national security concerns, are unreviewable, even if those actions potentially contravene constitutional rights and protections. The Government indeed asserts that it violates separation of powers for the judiciary to entertain a constitutional challenge to executive actions such as this one.  - 3 Judge panel of the 9th Circuit Court of Appeals, Washington v. Trump.

ARTHUR: I am your king!
WOMAN: Well, I didn’t vote for you.
ARTHUR: You don’t vote for kings.
WOMAN: Well, ‘ow did you become king then?
ARTHUR: The Lady of the Lake,
[angels sing]
her arm clad in the purest shimmering samite, held aloft Excalibur from the bosom of the water signifying by Divine Providence that I, Arthur was to carry Excalibur.
[singing stops]
That is why I am your king!
DENNIS: Listen — strange women lying in ponds distributing swords is no basis for a system of government. Supreme executive power derives from a mandate from the masses, not from some farcical aquatic ceremony.
ARTHUR: Be quiet!
DENNIS: Well you can’t expect to wield supreme executive power just ‘cause some watery tart threw a sword at you!
ARTHUR: Shut up!

In Washington v. Trump, the 9th Circuit directly addressed the notion that the President’s actions relating to immigration and security are not subject to judicial review:

There is no precedent to support this claimed unreviewability, which runs contrary to the fundamental structure of our constitutional democracy. See Boumediene v. Bush, 553 U.S. 723, 765 (2008) (rejecting the idea that, even by congressional statute, Congress and the Executive could eliminate federal court habeas jurisdiction over enemy combatants, because the “political branches” lack “the power to switch the Constitution on or off at will”). Within our system, it is the role of the judiciary to interpret the law, a duty that will sometimes require the “[r]esolution of litigation challenging the constitutional authority of one of the three branches.” Zivotofsky ex rel. Zivotofsky v. Clinton, 566 U.S. 189, 196 (2012) (quoting INS v. Chadha, 462 U.S. 919, 943 (1983)). We are called upon to perform that duty in this case. Although our jurisprudence has long counseled deference to the political branches on matters of immigration and national security, neither the Supreme Court nor our court has ever held that courts lack the authority to review executive action in those arenas for compliance with the Constitution. To the contrary, the Supreme Court has repeatedly and explicitly rejected the notion that the political branches have unreviewable authority over immigration or are not subject to the Constitution when policymaking in that context. See Zadvydas v. Davis, 533 U.S. 678, 695 (2001) (emphasizing that the power of the political branches over immigration “is subject to important constitutional limitations”); Chadha, 462 U.S. at 940-41 (rejecting the argument that Congress has “unreviewable authority over the regulation of aliens,” and affirming that courts can review “whether Congress has chosen a constitutionally permissible means of implementing that power”). Our court has likewise made clear that “[a]lthough alienage classifications are closely connected to matters of foreign policy and national security,” courts “can and do review foreign policy arguments that are offered to justify legislative or executive action when constitutional rights are at stake.” American-Arab Anti-Discrimination Comm. v. Reno, 70 F.3d 1045, 1056 (9th Cir. 1995).

This is not a new or radical law or phenomenon. We need only to re-read the words of the subject of a hit musical on Broadway, and it’s not King Mongkut or Arthur:

[T]he courts were designed to be an intermediate body between the people and the legislature, in order, among other things, to keep the latter within the limits assigned to their authority. The interpretation of the laws is the proper and peculiar province of the courts. A constitution is, in fact, and must be regarded by the judges as, a fundamental law. It, therefore, belongs to them to ascertain its meaning, as well as the meaning of any particular act proceeding from the legislative body. If there should happen to be an irreconcilable variance between the two, that which has the superior obligation and validity ought, of course, to be preferred; or, in other words, the Constitution ought to be preferred to the statute, the intention of the people to the intention of their agents. — Alexander Hamilton Federalist No. 78.

If the words of the ten dollar founding father aren’t enough, here’s what the Supreme Court wrote in Marbury v. Madison, the 1803 landmark case dealing with the Constitution and judicial review of statutes and executive acts (and omissions).

It is the essential criterion of appellate jurisdiction that it revises and corrects the proceedings in a cause already instituted, and does not create the cause.

The authority given to the Supreme Court by the act establishing the judicial system of the United States to issue writs of mandamus to public officers appears not to be warranted by the Constitution.

It is emphatically the duty of the Judicial Department to say what the law is. Those who apply the rule to particular cases must, of necessity, expound and interpret the rule. If two laws conflict with each other, the Court must decide on the operation of each.

But contrast the words of our Founders and the federal court with those of Trump’s uncanny clone of Roy Cohn, Stephen Miller:

Well, I think that it’s been an important reminder to all Americans that we have a judiciary that has taken far too much power and become, in many cases, a supreme branch of government. One unelected judge in Seattle cannot remake laws for the entire country. I mean this is just crazy, John, the idea that you have a judge in Seattle say that a foreign national living in Libya has an effective right to enter the United States is — is — is beyond anything we’ve ever seen before.

The end result of this, though, is that our opponents, the media and the whole world will soon see as we begin to take further actions, that the powers of the president to protect our country are very substantial and will not be questioned. — Presidential advisor Stephen Miller.

DENNIS: I mean, if I went around sayin’ I was an empereror just because some moistened bint had lobbed a scimitar at me they’d put me away!
ARTHUR: Shut up! Will you shut up!
DENNIS: Ah, now we see the violence inherent in the system.
ARTHUR: Shut up!
DENNIS: Oh! Come and see the violence inherent in the system!
HELP! HELP! I’m being repressed!
ARTHUR: Bloody peasant!
DENNIS: Oh, what a give away. Did you here that, did you here that, eh? That’s what I’m on about — did you see him repressing me, you saw it didn’t you?

Not to be outdone, Representative Chris Collins (R)(NY-27), Trump’s chief apologist, said this on MSNBC:

I think the job that President Trump and his team have done is exceptional, especially given the fact he doesn’t even have his whole team put together. You know, you take one step at a time, in this case a judge ruled on the executive order on the travel ban, pointed out some ambiguities — that he thought were ambiguities — easy enough to fix, easy enough to come forth with a new executive order that addresses that. Call that a very small bump; we move on, we keep the border secure, we keep the country safe. What the press is saying … you know, ‘disarray’ or ‘confusion’ or whatever they may want to say I don’t think is that at all. We just — continuous improvement, we move forward, I think we may see a new executive order coming forward that addresses those concerns, and then we just — again — we move on. I don’t see the disarray, I mean, President Trump’s been in three weeks, he doesn’t have his full cabinet, and, it’s true, what he’s been able to accomplish is extraordinary.

When it comes to the President’s authority to secure our borders and decide who does or does not come into this country, [the President] does have absolute powers, and there’s no question about it. The ambiguity surrounded Green Card and maybe visa holders…when it comes to immigration, I think if you read it, he does have… that is a power that rests in his hands, and the judge nitpicked Green Card holders and visa holders — that can be easily addressed. But the President of the United States clearly has the authority to close the borders to people that he does not believe should be coming in, that would put our nation’s security at risk, and that is not to be questioned.

Miller’s and Collins’, “the powers of the president…will not be questioned” is the modern equivalent of the Führerprinzip, the concept of supreme executive power that governs within a fascist totalitarian system: that the leader’s word is above all written law and not subject to review or contradiction.

To call all of this ignorant and un-American is a dramatic understatement.