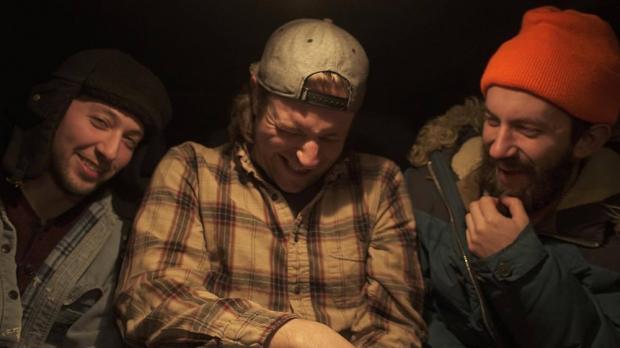 Talking to the three piece garage rock band Ugly Sun on a cold afternoon at a coffee shop in Buffalo, the conversation turns to their choice of hats.

Guitarist Trey Hollowood is wearing something like a Russian Ushanka hat. Bassist/vocalist John Crook is wearing a beenie with the logo of his family’s bar in East Aurora, the Bar Bill Tavern, and his brother Harry, the drummer of the band, is wearing a retro Buffalo Bills hat—the standing red Buffalo on a white background. Harry is given the award for best hat of the day by me, and Hollowood is visibly disappointed.

“You were banking on that best hat?” I ask him.

“I mean I was hoping… it’s kind of my calling card,” he replies.

John Crook pipes in: “He has a leather bills hat,” he says, pointing to his brother.

The conversation spirals further and further into absurdity until we gather ourselves and get to the reason we’re meeting today—to talk about the band’s upcoming gig at Nietzsche’s as part of the concert series The Public Presents. The gig, this Thursday, February 16, also features post-hardcore band The Slums, and new-to-the-scene grunge band Cooler.

“What we’re about to do at Nietzsche’s with The Slums and Cooler—the line up is perfect for us,” says John Crook. “It’s guys that we know and it’s our friends. And all three bands are doing stuff right now, releasing cool music. Cooler’s music is doing well on blogs and college radio, which is really cool.”

The origins of all three bands on this show intertwine in many ways. Members of Ugly Sun have shared common band ancestors with members of both Cooler and The Slums. Steven Floyd of The Slums was once in Arctic Death with John Crook. Nick Sessanna of Cooler was also in a former band, Nelson Type, with Hollowood.

Coincidentally, at this point in the conversation, Steven Floyd guitarist of The Slums and former roommate and bandmate of John Crook’s walks into the coffee shop we’re in and notices us. He walks over and gives his thoughts on his friends.

“Worst people I’ve ever met in my life!” he says. Everyone laughs and Floyd exits stage right.

“There are constant connections between us and those bands,” says John Crook.

In the beginning, John Crook and Hollowood were in the popular early 2000s Buffalo pop punk band Mandy K. After leaving Mandy K, Hollowood joined the band Nelson Type and John Crook started his band Arctic Death, which Floyd was also in. Harry Crook left to study music at Berklee College of Music in Boston where he studied songwriting.

“Then we all just kinda stopped what we were doing and started working in East Aurora, and all kinda developed this cynical attitude, like fuck it, nothing’s even happening and everything is beat,” says John Crook.

For a few years, the guys kind of just gave up music.

“Then the stars aligned and we were like maybe we should just start playing covers together,” he says.

So the three of them learned some covers. They played some stuff by The Replacements, Dr. Dog, The Band, Ryan Adams, and a bunch of other bands. They also couldn’t help but write songs together too. They wrote 10 songs before they had a meeting and decided that they were officially a band.

“We always like to say we sound like the Replacements but nobody thinks that at all,” says John Crook, laughing.

Learning those covers helped the guys figure out exactly what they did and did not want to do with this band.

“What made The Replacements really cool was that the structures of their songs weren’t really tight and they weren’t too serious about trimming the fat and making a concise song,” he says. “That’s all stuff that we really care about. We like structure and really tight song writing and making sure things don’t drag out. We love how honest and raw the Replacements are so we hope that aspect transfers.”

“We all like different shit. And I think that’s what works best about our song writing,” says Harry Crook.

Now they practice at the small stage at 189, the restaurant in East Aurora known for their extensive selection of whiskeys. The band does not tap into those fine whiskeys during their practices there several days a week, however; they opt for coffee instead, since their practices usually take place in the morning before the restaurant opens.

“Coffee is necessary, all day and all night,” says Hollowood, who also indicates that he’s not really a morning person.

None of them are morning people, actually, and so strangely, that makes morning practices more serious. There’s less goofing around and they go straight to business.

“It’s beneficial because it makes us do what we’re supposed to do because we have a limited amount of time and we’re literally in pajamas, so it’s a miracle we’re even playing,” says John Crook. “If we were practicing at night or drinking while we were practicing we probably wouldn’t play any songs. We’d play ‘Detroit Rock City’ for three and a half hours and then fall asleep.”

Since forming in April the band has put out a record, their Cherokee EP, toured in a few different states, played a slew of shows locally and have just finished recording their second record.

“We’ve been slowly but surely doing more and more and more. We’re doing regional shows and renting minivans and shit, but now we’re buying a van. We’re touring down to SXSW in March,” says John Crook, before adding the caveat that they don’t actually have a show booked. Though they don’t have any shows booked in Austin, Texas, where the annual street music festival SXSW is held, they’re willing to wait on stand by.

“A lot of people tend to drop at SXSW, people just don’t show up. So if you have your gear and you know people….,” says John Crook.

That’s the beginning of the next step for the band. Their goal is to be on the road for as much of 2017 as possible.  And they’re banking on their deep friendships to keep them together along the way.

“We were friends before any of us played real shows or were in a real band,” says John Crook. “So I think friendship is what has remained consistent.”