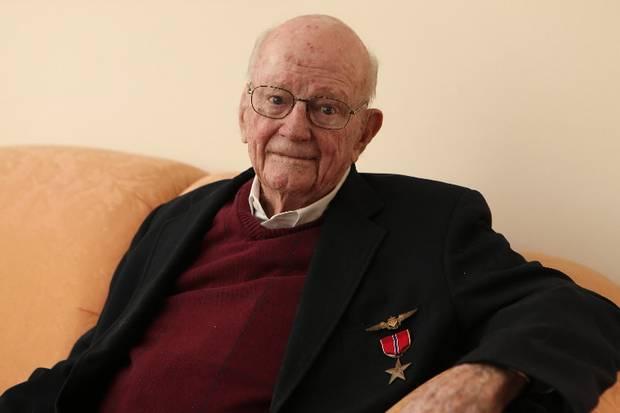 The second paragraph of Gene Warner’s Buffalo News obituary for Richard E. Moot, the Buffalo lawyer who died January 29, 2017, at the age of 96, tells us that, “As a Navy signal officer, guiding pilots landing on aircraft carriers at night, he designed a flight suit with fluorescent stripes for the officers, to help the pilots. The ‘Moot Suit’ soon became standard dress for landing signal officers, and Mr. Moot also won a Bronze Star during the war.”

According to Buffalo News reporter Lou Michel in 2012, Rit said he had been a fighter pilot “flying above the Atlantic Ocean off Cape May, N.J., in search of German submarines. ‘That turned out to be awful boring. I managed to get myself transferred to Landing Signal School so I could get into the Pacific Theater.’”

What Rit told Lou Michel may be true. When I read Gene Warner’s obituary a week ago and Lou Michel’s article from five years ago, I thought of a wonderful passage in In Italo Calvino’s Invisible Cities. Italo Calvino has Marco Polo tell Kubla Khan one fantastic tale after another. Finally, Kubla Khan says, “When you return to the West, will you tell people the same tales you tell me?” Marco replies, “It is not the voice that commands the story, it is the ear.”

Here is my memory of Rit’s Moot Suit story, which differs from Gene Warner’s obit (in which he doesn’t mention he had been a fighter pilot) and Lou Michel’s (in which Rit may have been modest about how he became an LSO on a Navy carrier in the Pacific).

Rit and I met during the Attica prisoners’ civil rights trial in federal court in Buffalo in 1991. We were on opposite sides, but we liked one another and became friends.

Diane Christian and I had dinner with Rit and his wife Barbara one night, then we came back to our house and told stories. That was when Diane and I learned about the Moot Suit.

As I recall, Rit said he’d done his maximum number of cockpit missions, so he had to transfer to something else. He decided, he said, to be a Landing Signal Officer, because LSOs were the guys who kept carrier-based fighter pilots alive. It wasn’t that he become an LSO to get to the Pacific Theater—if he still had missions to fly and wanted to fly in the Pacific Theater, they’d have transferred him there. It was rather that his flights were used up and he still wanted to be in action.

When he talked about that, I remembered that when I was in Marine airman training (the Marines were and are part of the Navy) all LSOs had to have been fighter pilots. Rit would not have had that job had he not spent many hours in the air in a small plane, landing it on a rocking carrier deck. They didn’t want LSOs who knew the job only from the deck of a carrier; they wanted LSOs who knew the job from the cockpit of a small plane, trying to stay alive.

The LSOs stood on the side of the carrier’s back deck. They signaled the pilot with hand paddles to let the pilot know if a wing was too low or too high, if the plane was rocking to the left while the ship was rocking right, if the plane was coming in too high for the barriers to catch it, or so low it would crash into the stern of the ship, or not even make it to the wire barriers that kept it from skidding off the bow.

The LSO was the guy who, at the last few seconds before touchdown and shutdown of the engine, told the pilot what to do. Over the sea, it was the enemy a pilot had to worry about. Coming home, it was the position of the flight deck and the orientation of the plane.

All of that is electronic now. Back then, it was just two guys, one in an airplane, the other at the side of the deck of an aircraft carrier. If either of them got the signals wrong, the plane was lost and the pilot was dead.

The bad part, Rit told us, wasn’t during the day. During the day, the pilots could see the signals the LSOs were giving them and the deck of the ship, and most adjusted their orientation accordingly. Night was different. At night, the three carriers in the pod couldn’t turn on their lights because of Japanese submarines. Pilots who came back in the dark saw nothing but the LSO’s hand paddles. They couldn’t know if the deck of the ship was off, the paddles were off, or their plane was off.

If the carriers lit up, the ships were vulnerable to torpedoes. If they didn’t light up, the incoming fighter pilots often crashed into the end of the landing deck, or came in fatally too high or too low. Most of the landing casualties occurred when the planes returned to the ships after dark.

Rit was, he told us, on shore leave somewhere and he saw in a tchotchke store some reflecting tape. If you hit it with a bit of light, it lit up as if it had been the target of a spotlight. He’d never seen anything like it. He bought a whole bunch of that tape and he lined his LSO uniform with it: the arms, the legs, the hat, the hands. The incoming pilots could now see not only his paddles, but the whole outline of his body. They understood the flight deck they were approaching in those Pacific nights.

His ship, as a result, had far fewer lost planes or dead pilots than the other two carriers in the pod. When his ship’s captain found out what he had done, Rit told us, he wanted Rit court-martialed for working out-of-uniform.

When the admiral in charge of the pod found out what Rit had done, and the consequent reduction in lost planes and pilots, he terminated the disciplinary, gave Rit a decoration, and ordered all other LSOs to decorate their working uniforms as Rit had decorated his. Pilot deaths in the entire pod immediately decreased. Other LSOs in other pods soon illuminated their working uniforms in similar fashion, and fewer of their pilots died.

A uniform in a glass case

Rit told us that he and Barbara had been in San Diego for a lawyer thing. They visited the naval museum there. They stopped at a case that had a mannequin of a man dressed in a World War II naval LSO outfit. The wall card identified it as “The U.S. Navy’s Moot Suit.”

Barbara said, “This has your name on it.”

“So it does,” Rit said. That may have been the first time he told her about the Moot Suit.

Most people around Buffalo remember Rit as a good lawyer who did a lot of philanthropic work. He was both. Before all that, when he was a kid in his early 20s, he was a Navy fighter pilot, a group that had a horrific mortality rate, and then a Navy LSO, a group that was also in constant harm’s way because those planes that didn’t get the signals right could crash on the deck, could go into the sea, or could come straight in and chew up the LSO. He came up with a simple idea that kept a lot of pilots and LSOs alive.

Diane and I knew Rit for maybe 15 years before he told us about the Moot Suit. It was after a long dinner and drinks back at our house afterward. Something else in the conversation occasioned the story. It wasn’t something Rit dwelt on. It was something he’d done long ago, like flying those small planes and helping other guys land similar planes on a very small deck out of the night sky over a dark sea.

Bruce Jackson is a SUNY Distinguished Professor and the James Agee Professor of American Culture at the University at Buffalo.