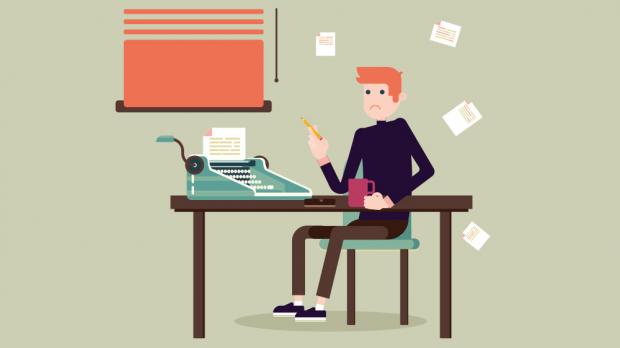 “Do you even enjoy writing?”

He’d cut me off while I was ranting about something work-related. We were just shooting the breeze at the coffee shop. I was taken aback by what I’m sure he didn’t realize was a  complicated question. Our other friend stared at me, unsure how I’d respond.

Perhaps it shouldn’t be complicated, but it is.

He sounded exasperated, which made me feel as though my response needed to be short. If you’ve ever experienced that infuriating moment of disconnect when you lose someone in the process of answering their question, then you know why.

“Sure, I enjoy writing,” I said, hesitantly. “But that doesn’t mean it isn’t work. And just like any other form of work, it comes with a fair amount of aggravating circumstances that can detract from the enjoyment. Just because you feel passion or an inner drive regarding your career doesn’t mean you get to avoid those things. That’s a myth.”

Actually, the truth is a bit worse. The passion and inner drive don’t allow you to walk away when something is merely “good enough.” You don’t leave work at the door, or by the bed, or wherever. It’s permanently enmeshed in all aspects of your being. And if you do manage to half-ass something, it haunts you. Hard.

The conversation moved on, but I found myself feeling pissed off, like I wanted to spend more time bursting his bubble. Idealism reminds me of someone I used to be, but it’s definitely not who I am now.

I certainly hope I enjoy writing. It’s beaten me up a bunch of times. I’ve looked for alternative options, but writing has kept finding me. When I was a little kid and people asked me what I wanted to be when I grew up, I’d said I wanted to be a writer. It got lost in the shuffle for a while, only to reappear in my early thirties. I tried to shake it off completely as recently as four years ago, but nothing else came together. It continues to be that one thing I know how to do.

Well, maybe not the one thing. To supplement my writing career, I’ve cleaned houses and office spaces, worked at a gym, and compiled DVDs of YouTube videos for a tech-challenged person. I’ve written an ebook about the first-time home-buying process and have been paid to submit five-star Amazon reviews of diet books. I’ve been a third-shift babysitter for a pair of toddlers. I worked for a famous travel and adventure writer doing his preliminary research and interviews for $10 an hour and sustained none of the glory from his final products. I have also generated gads of web content aimed at achieving “search engine optimization”—essentially a puzzle-paragraph that must use certain words and phrases a number of times whether or not it makes any grammatical sense. These are then critiqued (for real) by a bunch of overpaid hacks who like to pretend they know what they’re doing. They pay between $5 and $7 each, and if you miss a deadline, you lose 20 points of your precious dependability score. One point for each assignment in on time, 20 points lost for each one that’s late.

People tend to romanticize a writer’s life. It’s infuriating. I guess if you’re in the position of producing high-profile fiction for big-name publishing houses, or fascinating, grant-funded nonfiction—maybe those scenarios still have some romance to them. But most of us who write professionally are mired in the gritty business of it, which is fraught with all sorts of unromantic hassles.

My initial journalism gig carried a higher profile than most: I scored an unlikely connection at the now-defunct Boston Phoenix. I still have what I sent in for my trial assignment. It’s lousy. But not so awful that it failed to yield a series of paid pieces.

I soon discovered that there will always be people who don’t like your work. It’s a job in itself learning how not to let that crush you. The folks at the Phoenix were brutal. The paper had won many awards for excellence in journalism during its nearly 50-year run, and the in-house classical music critic had nabbed a Pulitzer. Suffice to say, they were a judgmental lot. If you work at a restaurant and someone doesn’t like the way you roll silverware, or is annoyed because you take too many smoke breaks, that’s one thing. But when someone doesn’t like your writing, that encroaches on very personal territory.

When I look back on what I wrote for them, the audition piece notwithstanding, my clips are quite solid. Even worthy of an occasional, “Gee, I wrote that? So early on? Wow.” But the music editor and I began clashing, and it quickly spiraled out of control. Personality issues. He told me the entire editorial staff would groan in agony when they’d see my name on the storyboard schedule. Whether or not it was the truth doesn’t matter; It created a wound that’s slow to heal. I’m still arguing with him in my head.

Thankfully, Boston’s LGBT press revived my spirits, giving me work for the asking so long as I was willing to write about other things in addition to music. The thought of going back to waiting tables was enough to keep me agreeable. Soon I was juggling business profiles, all sorts of arts stories, the police beat, a weekly events calendar—I refused to turn anything down.

Problem was, I couldn’t seem to get paid.

Around this time I began writing music reviews and previews in other cities: Hartford, Nashville, Orlando, and Boulder. I found editors who didn’t seem to mind my being an out-of-town correspondent. So there was a little money trickling in. But the publishers who produced the two local papers for which I was furiously writing a weekly handful of articles? They were struggling to undo the damage left by the previous publisher. So I had to wait. It seemed fairly reasonable at first. After all, these were my LGBT peeps, right? They’d take care of me. And they did. But it took nine months. In the time it took them to pay me—a reputable weekly publication in metropolitan Boston—you could have carried a baby to term.

I ended up losing my apartment. This has happened not once but twice in my writing career, and not for lack of work but for lack of timely compensation. It’s part on the industry. With very few exceptions, if someone tells me they’re making bank in journalism, I’m leery.

I eventually landed a solid, ongoing gig at the Boston Herald. I got good at writing what are called (in newspaper jargon) “third edition reviews.” These are the concert reviews that are submitted the night before for the late morning edition of the paper. Daily newspapers are high-pressure environments, and the third edition deadline is about as anxiety-inducing as it gets. You need to have all your ducks lined up ahead of time because you will not have time to do any research after the show.

Actually, third edition reviewers write their reviews during the last third of the performance, often from a corporate box in the upper portion of the venue, alongside journalists covering the same gig from other publications. Smaller venues might not offer you those accommodations, leaving you to find a nearby hotel lobby with accessible wi-fi or café that’s open late. Whatever the case, at 11pm, that review needs to be in whether it’s witty and authoritative or not. Best to bring a cheat-sheet, know the set-list, which albums the tracks are taken from and why. Know who is subbing for so-and-so, what their back-story is, and have some fall-back notes about the openers.

Sometimes it felt like a gun was being aimed at my feet while someone yelled, “Dance!” I got good enough at it that I was first chosen for those assignments several years running.

I also developed a reputation, unbeknownst to me at the time, for being a pain in the ass. This time they were groaning because I was concerned about sounding as good as we could (“we” being me and the paper I was representing). I would sometimes calls the overnight copy desk to make sure they would leave certain phrases alone, or perhaps I’d realize I made a factual error that needed correcting at the last minute. Imagine that: Making enemies because you’re trying to get it right. Otherwise, you have a team of people playing Jenga with your sentences, concerned only with making it fit into a certain space.

During my tenure with the Herald, most of my days were spent buried in email, negotiating assignments, haggling with my editor, and going after interviews. The interviews are also high pressure. You have maybe 20 minutes and they’re often booked in blocks, so another journalist is almost always waiting for you to finish. In that time, you need to get a coherent story regardless of the interviewee’s mood. I interviewed Paula Poundstone a couple years ago, and I could’ve sworn she’d dumped out her purse while we were on the phone and was sifting through a pile of crumpled receipts. Liam Finn (son of Crowded House’s Neil Finn) hung up on me. Just last summer, singer/songwriter Steve Earle got annoyed with me during an interview when he misunderstood something I said. You’re being paid to call strangers, sometimes really famous ones, and ask them pressing questions. You can’t bet on much.

My point is that the actual act of writing is only a small part of the job. There’s a serious hustle involved. Many writing jobs now also require you to be a photographer, videographer, social media maven, and/or graphic designer. There’s always another hoop to jump through, and the pay doesn’t necessarily increase.

I lost my gig with the Herald mainly because someone else wanted it badly enough to lay in wait for the right moment to pounce. The details aren’t terribly important, but my job was sabotaged by someone who was jealous—someone apparently under the impression that it was a glamorous gig. Another slow-to-heal wound.

So, do I enjoy writing? When I have the privilege to be able to. When I can stop and take the time to appreciate the craft of it. The problem is that those moments are fleeting. But like so many other things in life, there’s always the excitement and thrill of the chase.