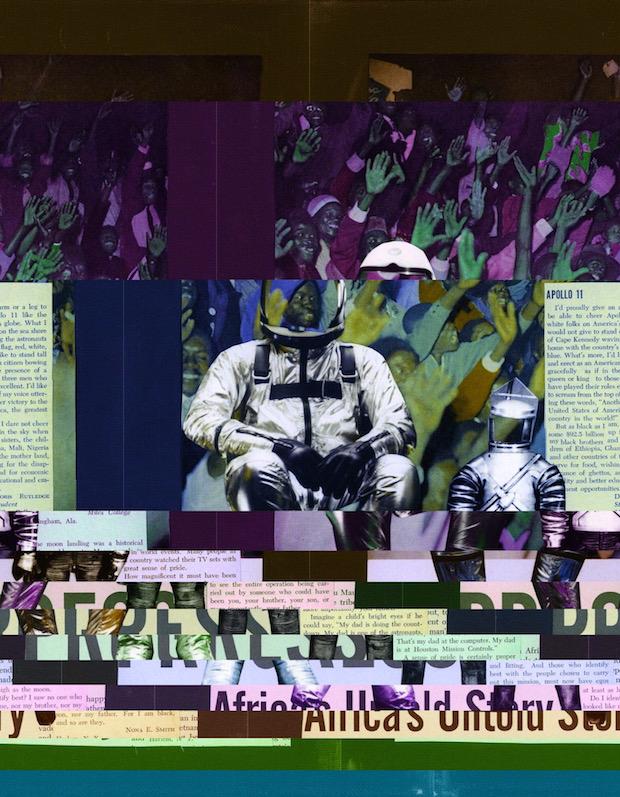 Black Quantum Futurism is a new approach to living and experiencing reality by way of the manipulation of space-time in order to see into possible futures, and/or collapse space-time…to bring about that futures reality.

The current exhibit at Squeaky Wheel is about Black Quantum Futurism. It may not be as arcane as it sounds. But with some arcane features and aspects. Some of the quantum physics stuff. And futurism in general can get tricky. Peering into the crystal ball.

But an aspirational/inspirational program and strategy for survival and more for African-Americans in particular, based on African diaspora heritage characteristics that have worked so far—to the extent they have worked—to accomplish solidarity and survival of the black community versus forces of oppression to the point of gradualist genocide by the white majority community.

A program and strategy incorporating traditional and well-recognized black heritage cultural aspects—music and dance and other arts, communal and ancestral memory, storytelling, religion, language, food—and some novel or possibly latent and unrecognized characteristics, such as in quantum physics and futurist categories. Amounting to an alternative way of perceiving reality to the Western—that is, European/American, the colonialist world—model based on linear time and three-dimensional space, in shaping and creating black communal and personal ways forward.

Exactly how this occurs does get complicated—arcane even—involving deep dives into quantum physics and vanguard ideas about space-time, and more sci-fi than straight science notions about time travel, into the past and into the future.

The BQF movement emerged out of inner-city Philadelphia. The exhibit opening featured a panel discussion/conversation among movement founding figures Camae Ayewa and Rasheedah Phillips and moderator local Afro-futurist multidisciplinary artist Ineil Quaran. Multidisciplinary scarcely begins to describe Ayewa and Phillips. Ayewa is a musician and dancer—hard to characterize her work in this regard, but one of the videos in the show is of one of her dance performances, in a kind of urban junkyard setting, to a frenzied rhythmic a-melodic musical creation, interspersed with graphics of the planets and their orbits, and repetitive snatches of spoken vocal matter of a seemingly philosophical nature, but too fragmentary to get the sense of—and writer of non-fiction essays and sci-fi fiction, though with the proviso: “only true stories.”

Phillips also writes non-fiction essays and sci-fi, and lest anyone get the idea the movement, with its alternative reality elements and objectives, is whole cloth fantasy stuff, unrelated to the real world of real people and their problems, Phillips’s day job is as a housing attorney in Philadelphia, work involving endless legal system advocacy on behalf of clients usually on lower rungs of the socioeconomic ladder, but also entailing constant drafting of proposals—another writing task—to revamp existing Philadelphia housing laws or create new ones to remedy situations detrimental to her clients and urban poor and oppressed people in general.

So the futurism aspect of the program seems in part about alternative reality—sci-fi reality, a little or maybe a lot like alternative fact—but in larger part about imagining and envisioning a better future reality for succeeding generations. Progress. Phillips talked about how her mother became a mother as a teen-ager, and she herself became a mother when she was fourteen, but her daughter is now in her twenties, having avoided teen-age motherhood and the extraordinary burden it represents to career and economic advance.

Exhibit items, in addition to the Camae Ayewa music and dance video, include:

—An instructional video complete with exercises for manipulating time: “Recall a memory, then get inside the memory to actually re-experience it…take a specific thought from ‘past,’ ‘present,’ or ‘future’ categories and reverse direction…as you practice these exercises you should be able to slow down or stop time…”

—A video on the demolition of a high-rise housing project of the sort touted in the 1950s as the ultimate solution to inner-city housing and related social problems.

—BQF paraphernalia including several books/pamphlets on or about the movement. And lots of actual or depicted clocks.