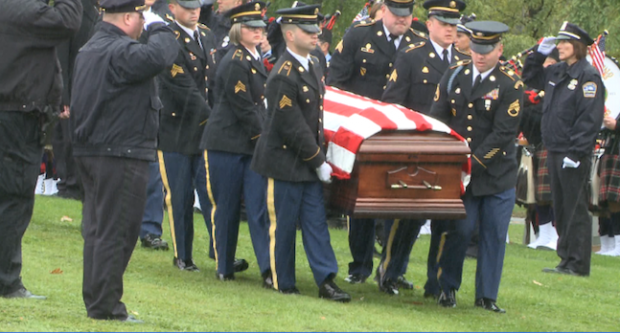 The rapid-moving and debris-filled water of the Niagara River was unfamiliar territory to Officer Craig Lehner. His previous dives were in relatively calm and contained waters like the Buffalo River and the clear, warm Caribbean where he got his scuba certification.

Last October, Lehner was training with the Buffalo police’s Underwater Recovery Team in the Niagara River, the first time the team had trained there in over a year. While the team’s commander, Detective Leo McGrath, has more than 30 years of diving experience, he is not certified to teach public safety diving.

Underwater, Lehner lacked the equipment to communicate verbally with his teammates and would have been limited to making signals with the tether line connecting him to his colleagues onshore. Lehner also did not have a piece of equipment that might have enabled him to free himself in the event his tether became tangled and trapped him under water.

Lehner drowned and his body was recovered five days later after a frantic search by his teammates and other law enforcement agencies.

Investigative Post reviewed more than 130 pages of police records obtained through the state Freedom of Information Law and interviewed six diving professionals. These records and experts suggest that Lehner was inadequately trained and equipped for the dive that led to his death.

The diving professionals interviewed did not want to speak to the specifics of Lehner’s drowning. But the best practices they described for public safety diving operations elsewhere stand in contrast to what’s done here in Buffalo.

David Concannon, an attorney based in Pennsylvania who investigates diving fatalities, questioned why Lehner dove in such hazardous conditions for a training exercise.

“In my professional opinion, you don’t put somebody into harm’s way to train them for something that’s unlikely to occur without really taking additional precautions,” said Concannon. “You don’t trigger an avalanche to help, to see, to rescue someone from an avalanche. It’s unnecessary, it’s unsafe.”

Three weeks ago, Lehner’s family filed a notice of claim against the city and police department, preserving their right to file a lawsuit. The claim argues that the Underwater Recovery Team acted with “negligence, recklessness, and carelessness.” The notice also alleges that “unreasonably dangerous conditions” in the Niagara River, coupled with insufficient equipment, lack of “proper communication” and “incompetent” oversight of the dive led to Lehner’s death.

Lehner’s death brought about an outpouring of public grief. People hung blue lights outside their homes. Thousands attended his funeral at the downtown hockey arena and lined Delaware Avenue to watch the procession pass to his burial site at Forest Lawn Cemetery.

McGrath spoke at the funeral.

“Since day one on the team, Craig was always calm, cool, and collected,” he said. “He had so much confidence, you would have thought he was on the team for years.”

The Underwater Recovery Team searches and retrieves evidence and bodies and performs the occasional rescue. The team is a secondary duty for its 18 members, whose primary assignments range from patrol to narcotics to the K-9 unit, where Lehner was deployed. Trainees are required to have baseline scuba skills to join the team.

Many members got their initial qualifications with Dip ‘n Dive, a local dive shop staffed with certified instructors. Lehner, a 34-year-old National Guard veteran who served in Iraq, received an advanced scuba diving certification in 2014 from a dive shop located at the US Naval Station at Guantanamo Bay, Cuba.

Even with an elementary background in diving, experts told Investigative Post that trainees should increase the difficulty of their dives incrementally and first learn how to manage crises in easy environments.

Records obtained by Investigative Post show that while Buffalo police did conduct five training sessions with Lehner in placid waters, questions remain as to whether he was prepared to dive in the Niagara River’s swift currents and whether his teammates were capable of rescuing him in the event of an emergency.

It’s common practice to start trainees in what’s referred to as “confined water.”

“It means an easy entry, no turbulence on the surface, no waves, no added problems for a new diver,” said Michael Sieverman, a public safety diving instructor and retired police officer based in California. “Learning how to dive is learning how to solve problems, to either overcome them once they present or avoid them all together before they become a problem.”

According to a dive team record, Lehner “did well” but “came up too fast” on his first training dive in the Buffalo River in May 2017.

Between that first session and September, Lehner dove four more times in the Union Ship Canal and the Buffalo River. Those waters are different from the rapid current of the Niagara River, which flows 10 to 15 miles per hour and has a lot of debris on the riverbed, including cars.

“You can’t really train someone to experience something unless they actually experienced it, but you don’t have to throw them in the deep-end,” said Concannon, the attorney. “You can start in the shallow end and work your way down.”

The team’s training dives conducted in the two-and-half years preceding Lehner’s death would not have necessarily prepared them for the incident in October. A majority of the team’s training sessions were focused on recovery and practicing “search patterns,” which involves practicing how to search and retrieve evidence or bodies. Most were in more placid waters like the Erie Basin Marina, the Union Ship Canal, and the Buffalo River. The team’s training in the more dangerous waters of the Niagara River was limited to two dives in August 2015 and July 2016.

Dive logs show that the the last time the team was called out for an operation there was in May 2017 for a “body search.” The record states there were “reports of person screaming in river.” Police did not provide additional information about that incident.

The team trained in rescue techniques three times between January 2015 and September 2017, according to the documents obtained by Investigative Post. Another four training sessions were conducted in emergency procedures, like switching to backup air tanks. All seven sessions were conducted in relatively tranquil and confined waters, including one session in February 2015 at a city pool near Cazenovia Park.

The records have limited detail and police would not provide additional information about these sessions or if there were other instances of emergency and rescue trainings that were not fully documented.

Four members of the dive team received training in swift water surface rescue, two in 2015 and two in 2017. Such experience would be helpful if someone were drowning near the surface in fast-moving water, for example. Lehner, however, was diving well below the surface, at a part of the river about 25 feet deep, according to the Buffalo News.

The diving professionals interviewed raised concerns about the prudence of having a trainee dive in swift water.

“If it’s searching for evidence or some other type, or it’s a recovery, there’s really no pressing reason to get in the water and push divers that hard,” Sieverman said. “If you have a mission to accomplish, ensure your risk is worth the reward. And for swift water, there are a multitude of dangers that come with that.”

McGrath, the commander of the Underwater Recovery Team, has been diving since the 1980s and has taken advanced courses, including one on “aquatic death and homicidal drowning investigation.” But he is not certified to be a scuba instructor, let alone a public safety dive instructor, a police source confirmed.

The police source maintained that formal certification is unnecessary. However, diving industry professionals said it’s preferable for those overseeing training to have official diving instructor qualifications.

Jeff Morgan, a public safety diving instructor based in Utah, said it’s better for an instructor to get “accreditation from some type of training agency that would give that in-house training instructor some level of knowledge above and beyond just the general experience that they he or she may have.”

Concannon said that, generally speaking, a person might also pass on bad habits to trainees without formal instructor training. “If you haven’t had an instructor development course by an instructor trainer, you may never be aware that you’re teaching somebody incorrect information.”

A police source told Investigative Post that the department plans to send one of its new dive team members to a training course in Florida before the end of the year to become a certified public safety diving instructor. McGrath did not respond to multiple requests for an interview because of pending litigation.

Lehner went underwater without two pieces of equipment that might have prevented his death: electronic communications and hardware that lets divers easily free themselves from their rope if it gets tangled.

Soon after Lehner dove into the Niagara River, the rope connecting him to his teammates tightened, likely a result of getting snagged on debris, according to press reports.

“Anytime you dive in swift-moving water or strong current, there is a heightened risk,” said Morgan, the public safety diving instructor and former commander of the San Bernardino County Sheriff’s dive team. ”You need to make sure that your divers are prepared with the proper equipment and the proper procedures and certainly the proper training to perform in that environment.”

For Morgan “the biggest advancement in public safety diving in recent years” is a particular mask built for electronic communications. Lehner was not wearing one for his dive in the Niagara River, however. The Buffalo News reported that had he worn one, the currents would have “ripped” it off.

“When you’re in swiftwater,” said Concannon, the attorney, “you’re in a dangerous situation, every single time, and you need to be able to communicate effectively.”

Lehner’s sole means of communicating was a rope connecting him to his colleagues onshore.

“A regular old rope which you would use in placid still water in a canal is not going to cut it,” Concannon said.

The second piece of equipment Lehner lacked was “quick-release snap shackle.”  As its name suggests, it’s a piece of hardware that lets a diver easily disconnect from whatever line they are attached to. A police source confirmed Lehner did not have that equipment. Instead he was attached to his tether with a harness ring, according to the Buffalo News. Divers are trained to cut the rope when they need to free themselves, a challenge when under stress and in strong currents.

A police source said that the department doesn’t use quick-release snap shackles because they can be dangerous when diving under surfaces such as ice. In those situations a diver who detaches no longer has a rope to guide him to his entry point into the water.

Lehner was not diving under ice, but relatively warm waters that are about 65 degrees in October.

The circumstances of Lehner’s death are still under investigation by the Buffalo police and the Public Employee Safety Health Bureau in the state’s Department of Labor. Those investigations, and the possible lawsuit by his family, could determine precisely what role his training and equipment played in his death.

Daniela Porat is a reporter for Investigative Post, a nonprofit investigative journalism center focused on issues of importance to Western New York.