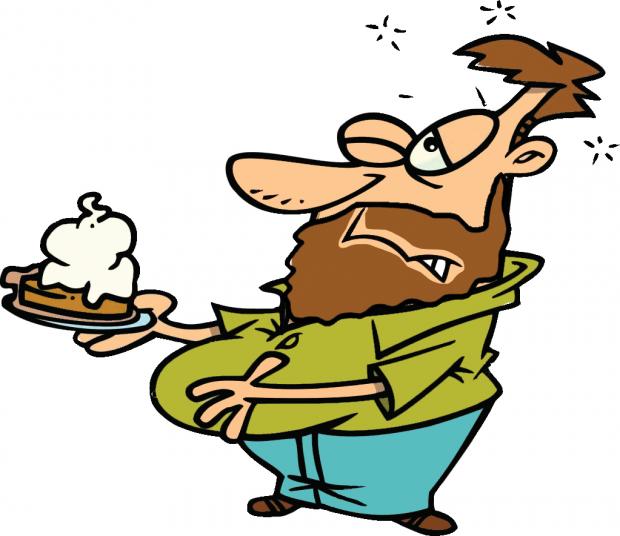 I’ve had a shitty few months and haven’t felt particularly inspired to write, so I took an unscheduled break. The smoke is finally beginning to clear, and looking up from my messy life, I can see that there’s been plenty to write about…maybe just not in the moment that it’s all been happening.

Reflecting on the shit-show of the last few months, I can trace a clear pattern of acting out with food. But while it was happening—at least in the beginning—I was blind to the undertow. My cluelessness makes the matter more amusing. In retrospect, it’s clear that one thing that got me through the holidays this year was pie.

It started the week before Thanksgiving. I had been gearing up to move apartments and tensions were mounting about money and logistics. And while running through Tops on Elmwood in the Target plaza—incidentally, where North Buffalo goes to die—I spotted a display for eight-inch pumpkin pies on sale. I think they were four bucks, something like that. So, I bought one.

Now, I’ve been disarmingly honest in these pages about my vices of yore, so my inability to imbibe much of anything with moderation should come as no surprise. Some compulsions need speedy intervention. For example, excess spending will have me in ruins quickly and destroy a lot of hard work that’s gone into raising my credit score. But when it comes to food, I usually let a compulsion run its course. My experience has been that these torrid affairs with foods—usually one specific food at a time—come to a natural end in a few weeks. In the past, I’ve been strung out on bakery muffins, brownies, salami, various cheeses, fresh bread and butter, cookies, cookie butter, cheeseburgers, mayonnaise (in cahoots with tuna and cold cuts) anything maple flavored, and numerous varieties of ice cream. In between these seasons of indulgence, there are usually periods of “good” eating. But all good things eventually come to an end.

A little history. My dad and I shared “a thing” for pumpkin pie. When I was a chubby pre-teen, we would gorge ourselves on Entenmann’s pumpkin pie which, in the 1980s, was a quality product. My mother would have trouble keeping up, making sure we had enough pie so that both of us could eat with abandon. If I went to bed before he did, I would often discover in the morning that he’d finished the pie behind my back. There was something competitive about it, and since I was never much for sports, I guess he took what he could get: The fey kid was useless with a football, but damn can he put away some pie. We were competitive about certain ice creams and Pepperidge Farm cookies as well. But the pie was an annual specialty, like the World Series.

I don’t like other pies nearly as much. I’m also not one of these people mentally masturbating all year about the arrival of pumpkin spice season. Back in the late 1980s and early 1990s, when seasonal beers were a novelty rather than the norm, I loved the Oktoberfest brews. And I did have an indulgent couple of months back during the 2011-12 holiday season when I soothed myself over a ridiculous breakup with copious amounts of pumpkin ice cream made by Blue Bell, a Texas-based creamery. It had candied pecans and praline swirls, and I recall wishing the container came with straps for my ears so I could just make a feedbag of it. Outside of these lab-formulated synthetic pumpkin simulations, however, I tend to favor the real thing.

I got the pie from Tops home with a vat of French vanilla and it was gone the following evening. But the Tops pies are funky with that weird skin on top that often looks burned and oily. There’s something nasty about them. It was tasty enough, but not the full-on flavor distraction I’d hoped for. So, within 48 hours I graduated to a Wegmans pie.

When this flirtation with dietary disaster began, Wegmans was having a promo: 12-inch pumpkin pies for $7. But when I went into the store a day or two past Thanksgiving (for which I took myself out for Indian food and then enjoyed half a pie, lowering my unpleasantly bloated self into bed early due to the ensuing food coma), there were no pumpkin pies. Panic set in.

Approaching the bakery counter, I said, “What’s the story with the pumpkin pie?”
The woman looked at me and smiled. “I guess they’re all gone. You mean the 12-inch ones, Hon?”
“I dunno, the big seven dollar ones.”
“Seven? No, those are nine.”
“No, they’re definitely seven.”

She went ahead and punched up a ticket on her bakery scale to see and it printed as nine. I was being made to feel like I’d imagined the whole thing. An addict knows how much the fix costs, lady.

“We’ve got those little ones for now,” she said, pointing to this pathetic little bite-sized pie for six bucks. It couldn’t have been more than three inches.

“That’s it on the pumpkin pie today?” I managed to catch the ear of a guy in full kitchen whites passing by. “Think so,” he said, smiling. I’m so glad everyone else was so fucking chipper. I had a fit. I marched out the door, slamming my little blue handcart into the stack in the entranceway. It seemed beyond comprehension to me: no pie at four in the afternoon on a day between Thanksgiving and Christmas? Unreal. I imagined a satisfying social media rant.

As I started the car, a light bulb appeared above my head: I’ll drive to the Dick Road Wegmans. They will surely have a pie for me. And they did.

Over the next two weeks or so, this sequence of events played out another three times. Each time, I drove myself to Dick Road for a pie, and each time my efforts were rewarded. Stopping at the Amherst store became a formality. I think I’d just grown fond of exasperatedly slamming my blue basket back into the stack as I exited.

Obviously, this sugar compulsion had completely spiraled out of control. But I hadn’t really noticed until the fourth trip to Dick Road. Sitting in rush hour traffic on the 33, it suddenly occurred to me: I was a junkie all over again. But the thought of the delicious pie quickly shut down that realization—the density and serious flavor of the pumpkin (a vegetable, mind you!) tumbling on my taste buds and mixing with the frivolous, fluffy French vanilla. It became like porn, churning on repeat in my brain. I’d sometimes run into people I knew at the supermarket and would essentially watch them talk while daydreaming about the pie.

After the fourth (and final) trip to Dick Road, I approached a different woman at the Amherst Street bakery counter. “What’s the story with the pumpkin pie?” I barked, as if she must know exactly what I’m referring to. She asked me to be more specific, so I explained that on four occasions recently I had to drive to Dick Road for a pumpkin pie and that it seemed the staff wasn’t putting out any pie for the later-day shopping crowd.

Maybe I was breathing heavy and/or perspiring. She could tell I meant business. My approach had all the finesse of a bank stickup. Her expression shifted a bit. Was she going to call security?

“I’ve been on vacation for the last two weeks,” she said, revealing that she was the department manager and noting that she intended to speak to her staff about pie coverage for late shoppers. But not to worry, she assured me: When and if I foundan empty spot where a pumpkin pie should be, all I had to do was ask and they would bring me one from out back that just might need to be heated up for a few minutes before eating.

And so, between then and Christmas, I continued gorging myself on pie. For every two pies, another 1.5 quarts of French vanilla also went down. I felt sluggish and awful, but I was beyond giving a shit. My beard was a mess, I’d been wearing the same industrial work pants for two weeks, and there was a French vanilla crust on my moustache. I was all out of fucks, except for the safe haven of pie and ice cream, which, by the way, I never ate before 9pm, thus ensuring a lousy night’s sleep due to the sugar surge.

The eating of the pie was no more civilized than my appearance. I would soften the ice cream in the microwave, then eat a few spoonfuls out of the middle of the container, leaving a perfect sized ditch to fill with a slice of pie, which would then get devoured simultaneously. One night I stopped at Wegmans for a refill and they’d roped off the entire refrigeration section for maintenance. There was a solid barrier of shopping carts chained to one another walling off the ice cream. French vanilla was in a display case facing outward at the end of an aisle, however, and no sooner had I discovered this than I found myself planking a cart, making a painful impression against my weary stomach muscles, to open the case and get my hands on the ice cream. Onlookers were amused, but I was mortified. I had reached bottom.

I ended the pie binge on Christmas. It seemed a logical end-cap since pumpkin season was coming to a close. And for nearly two weeks, I moved back into normal eating. I also got sick as a dog, which helped break the cycle. I missed pie, but I seemed to have reached a point of satiation (disgust?) where I was resigned to get back on track. As the second week in January began, however, I made the mistake of strolling down the bakery aisle. Lo and behold, pumpkin season wasn’t over. And so, there was a three-pie relapse—the darkness before the dawn. It felt so wrong: Pie had become vindictive during our two-week separation, and the sex just wasn’t quite as satisfying. I felt manipulated. Used. The second breakup needed to hold firm. Thankfully, it has.

As I ready myself for a doctor’s checkup today, I realize I will soon know just how much weight I gained eating somewhere between 15 and 20 pies, plus the, say, eight or 10 containers of ice cream. I have a lot of digging out to do. Grocery shopping with a friend the other day, I said, “I’ll meet you over there, I just need to run back to the prepared foods area,” and he said he’d just tag along. “Unless you’re going to get something you’re ashamed for me to see,” he joked. Nope, not anymore.