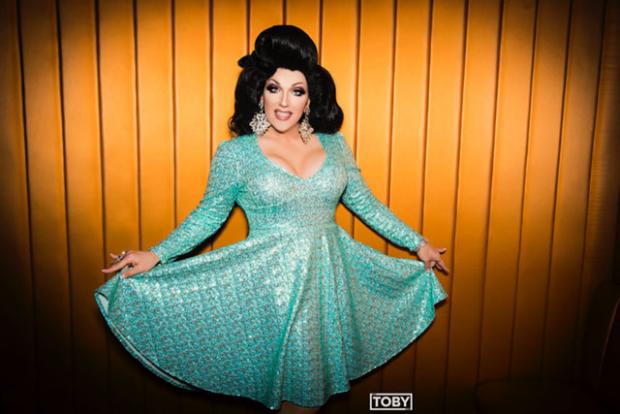 If the idea of something called a Big Gay Sing makes you chuckle, that’s good. When the New York City Gay Men’s Chorus staged the first Big Gay Sing in 2009, they wanted it to be over the top. Now, it’s a copyrighted concept that they loan to other choruses all over the world as a fundraising tool that doubles as a loose, let-your-hair-down event that’s meant to foster group spirit. The idea is to bring people together and celebrate in a shared knowledge of songs, because—when you’re able to let go of the ledge—singing is fun. And freeing. It’s good for your soul.

This is the 5th year that the Buffalo Gay Men’s Chorus is presenting a Big Gay Sing. In the past it’s been part of the official Pride Week lineup, but BGMC is going independent this time around, hosting the event at Roswell’s Hohn Auditorium and bringing in the talents of Ed Popil, a.k.a. Mrs. Kasha Davis, as emcee. Davis, you may recall, was a contestant on Season 7 of RuPaul’s Drag Raceand has long been a part of the Rochester drag scene. Her witty one-woman show, There’s Always Time for a Cocktailchronicles her journey from her youth in Scranton, PA to her adult transformation into “International Celebrity Housewife, Mrs. Kasha Davis.”

For a singing event that’s all about spirit and less about skill (Can’t carry a tune? Don’t sweat it!), Davis will be doing her part to keep the Big Gay Sing lively and upbeat, featuring a program of tunes—gently led by a portion of BGMC—that attendees will surely recognize. At a time of year when WNY is growing weary of winter, coming out for a night of comedy and song might be the best $15 you’ve spent since before Black Friday. We sat down with Davis, who regularly performs a Drag Story Hour at Rochester’s Blackfriar Theatre and has recently penned an autobiographical children’s book of her own, Little Eddie P. Wants to be a Star, which she will have on hand at this event.

Mrs. Kasha Davis will emcee BGMC’s 5th Big Gay Sing on Saturday, February 23 at Roswell’s Hohn Auditorium. Reception is at 6:30pm, tunes start at 7:30pm. Tickets are $15 and can be purchased through www.buffalogaymenschorus.com.

How has doing the Drag Story Hour enriched your life?
It’s absolutely my favorite performance to do in drag. Drag Story Hour inspires children of all ages to accept and love their genuine selves and we focus on treating others who may be different with kindness. I was so inspired by the experience that I decided to write my own children’s book with is autobiographical and can be purchased at my website, www.mrskashadavis.com  When I was a child, we didn’t have many examples of living your fullest truth openly and honestly and I’m so proud to be a part of the Rupaul’s Drag Racemovement because we get to share our stories on TV, in movies and on social media. Without exaggeration, this honesty is saving lives.

You get asked to do a variety of different kinds of events on the basis of your drag celebrity — what’s your favorite and why?
I love them all. I light up when presented with the opportunity to hit the boards and be a ham, but I honestly love meeting people who follow us crazy drag queens and hope to gain new friends who don’t along the way. Drag has a unique way of bringing people together and I’m proud to be a player in that game.

Has the There’s Always Time for a Cocktail show changed over the years that you’ve been doing it?
Cocktail is the story of my life so thank God it keeps changing because I’m still living and breathing. I recently did a little weekend tour to test out the current content for future bookings.  I am working on a P-town stint this summer so… fingers crossed!  The purpose of me sharing ‘Cocktail’ is with the hope that someone listening will of course be entertained, but it’s also to encourage acceptance, forgiveness, gratitude and ultimately to help people find a path toward loving their genuine selves.  When I was a kid there were no open and honest stories of self acceptance in the gay world, so I am delighted to share mine.

Outside of your own singles, what’s your favorite song to sing?
I only really sing “Cocktail” —  the others are just silly and I’m not even sure I know the words. Ha! Actually I do love my mini album called It Takes a Lotta Balls to be a Lady. They’re old broad-way songs that tickle my pickle.

What’s left to cross off your professional bucket list?
Broadway, RuPaul’s Drag Race: All Starsand voice over work for Cartoons.

WNY isn’t somewhere outsiders would assume to have a lot of drag talent, and yet we seem to have it going on — why do you think that is?
Polluted Lake water?  No honestly we are definitely a competitive bunch but we are a family. And just like family, we love and hate one another—but in the end we actually have respect for one another. Come see Keke Valasuqez-Lord save the show in our Drag Me to Brunch shows monthly at Edibles in Rochester and you’ll see what I mean!  Feb 24, March 10/31 and April 14th. (Visit www.ediblesrochester.com).