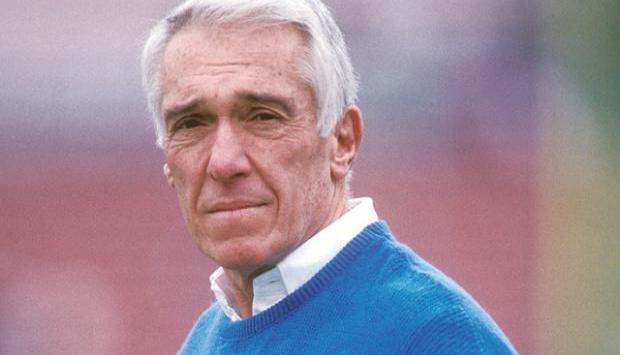 Love is in the air again between the Buffalo Bills and their fan base after a long-awaited return to the playoffs. The Bills’ flirtation with postseason glory comes 17 years after their last playoff appearance and 23 years since coach Marv Levy led the Bills to the last of four Super Bowl appearances in 1994. Levy, 92, still has fond memories of the coaches and players he worked with during the Bills’ glory days, many of whom continue to stay in touch with the Hall of Fame coach online and at public appearances. Fans will have a chance to catch up with Levy and other Bills greats like Bruce Smith, Bill Polian, Shane Conlan, and Fred Jackson at the Legends and Stars sports convention, which takes place Saturday and Sunday at Batavia Downs Gaming in Batavia. Levy is scheduled to sign autographs Saturday from 11am to noon. Calling from his home near Chicago, Levy spoke to The Public about the Bills renewed success, his first brush with a young Thurman Thomas, and the once-in-a-lifetime piece of sports memorabilia he possessed, briefly, as a youth.

I’m sure you were excited to see the Bills finally get back into the playoffs. What was your reaction to that dramatic finish to the Bengals-Ravens game that clinched a wild card spot for the Bills?
I did get to see a clip of it, and whoever was showing the clip turned right away to show the Buffalo Bills locker room and the reaction of Bills players, and it was really inspiring to see. I was so gratified, again, because honestly, I’ve coached a lot of places—Buffalo Bills fans are terrific. They are deserving of a team that can keep on going up the ladder.

Your Bills teams had a few late season wild card pushes. What is it like at that point in the season to not be entirely in control of your team’s fate and have to watch your future decided at another team’s hands?
Yeah, you’ve got to hope and you’ve got to pull for them. You don’t have any control over that one, but you put yourself in the position to profit if your team wins. It’s exciting and a little bit nail biting, too, I’m sure.

As the league has grown, the number of Bills staff has increased substantially, especially when compared to your days as head coach. As we’ve seen, though, those larger staffs haven’t exactly resulted in more success, and I’ve talked to former players who think the staffs are overgrown. What do you think?
Maybe I sound like an old fogy when I say this—I think the size of the staffs are too big. Honestly, it blows my mind to have that big of a staff.

I imagine that a team takes on a personality, especially through the front office and the coaching staff, and it is harder to solidify that personality when you’ve got 100 guys running around.
That’s very true, and it makes me think of a philosophy I had. We really kept it simple. You know, our playbook was only about 20 percent the size of every playbook in the league. Some coaches are enamored—more plays, more plays, more plays. But I wanted them to be the size where players could get repetitions, understand it and get the grasp to know which of the plays is applicable at that time. If a substitute goes in, he’ll have it mastered.

How would you grade the job performance of head coach Sean McDermott and GM Brandon Beane? I don’t think anyone expected to be in the playoffs after one year.
I think they’ve done a wonderful job. I’ve gotten to know Sean a little bit, I really haven’t had a chance to meet Brandon yet, but I’m sure they are working together well. And it’s not just a great coach, it’s not just a great quarterback—it’s the total organization that wins. Working together is what really counts. And I’ve been impressed. [Former Bills safety and current broadcaster] Mark Kelso was a William & Mary alum; Sean McDermott is there and he’s a William & Mary alum. Mike Tomlin in Pittsburgh, a William & Mary alum, is doing a great job. Way back in the 1960s I was coaching there, and they were the greatest group of overachievers I’ve ever known. In my five years coaching football at William & Mary, every single player on our roster graduated, and that’s the type of guy that comes out of there.

These sports collectors shows, like the Legends and Stars event you will be part of in Batavia, are always filled with unique and pieces of memorabilia. Can you think of any bizarre or interesting items fans have asked you to sign?
No, I can’t say that I can think of anything specific. Personally, I never was a real memorabilia guy. When I was about a nine or 10 year old kid, I had an uncle—and I’m going back a long way—he gave me a baseball. It was signed by Babe Ruth, Lou Gehrig, Joe DiMaggio, Red Ruffing, and Lefty Gomez and I went out and played ball with it and I have no idea where it is now.

Oh, God. That would be worth many thousands of dollars today. You probably would have been able to retire on that ball. I hope you enjoyed it!
That’s right, I had fun with it!

One of the fun things for you must be catching up with old players at these events. What is it like to see players that you coached as young men now all grown up with families and grandchildren?
They are moving into the age that I was when I came to the Bills as coach. It’s always great to catch up with them, I stay in touch with a lot of them. Occasionally, we get to reunite for something. I get to Buffalo two or three times a year for games, and email helps me stay in touch with a lot of them. We had the greatest group of guys. Bill Polian, Ralph Wilson and I determined that we would only bring in guys of high character onto our team. Some were extroverts, some were more laid back. And on rare occasion, we would make a mistake. But these were guys of high character, they showed up to work every day. Were they good citizens? Did they not blame their teammates? Those were the kinds of guys we had, and it all adds up to some pretty darn likable personalities, too. When we were getting ready to draft there early on, Elijah Pitts, our backfield coach was just pleading for us to draft Thurman Thomas. Thurman had had a very bad injury [in college] and was on a lot of people’s write off lists. And Elijah said, “Coach, you are going to love this guy! He can do it all, and he’s a guy of high character!” Well, when Thurman showed up for training camp, after about three weeks I said, “Elijah, did you say that he has high character or that he is a character?” That’s Thurman. He was a prankster and stuff of that nature, but what a player, what a teammate, and how I treasure knowing that I can say that I coached Thurman Thomas.

I’m sure a lot of people in the Buffalo area are wondering how you are enjoying your time in retirement in the Chicago area. What have you been doing to enjoy yourself and keep busy?
First of all, yes, I moved back to Chicago, my original hometown. My wife is from here, our daughter, grandkids, all of our siblings are from here and tons of friends. I exercise at least for an hour a day, whether it’s a little trot in the park or weightlifting. I’ve been very busy with family, with speaking engagements and I’ve written five books—everything from a memoir, to a novel, to a book of poetry and now a children’s book, Go Cubs Go! after the Cubs finally won a World Series after a 108 year drought.