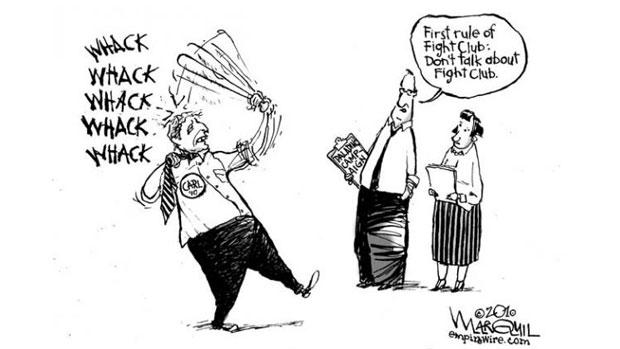 People of New York, be happy today. Be proud and pleased that you so effectively and decidedly dodged the “Carl Paladino for Governor” bullet that was aimed right at your heart back in 2010.

People of Buffalo, be concerned. Concerned not only because Paladino comports himself like a toddler in the throes of a perpetual temper tantrum, but because you have elected him to public office and he speaks for some of you — represents some of you. This isn’t about his general abhorrent demeanor and hateful joie d’ennui, but about bad governance, racial animus, intimidation, and interference.

Forget for a moment the hypocrisy of Paladino’s complaints about another board member forwarding around an email he didn’t like.

Carl Paladino believes that, by dint of his control of a Buffalo School Board majority, he is its dictator and can act in complete disregard of the rules or law. For a guy who enjoys referring to Governor Cuomo as “il Duce”, the hypocrisy is palpable. For someone who purports to be a tea party defender of the Constitution, the hypocrisy is disappointing. For someone who pretends to be acting in the students’ best interests, the whole sordid thing is embarrassing. From the Buffalo News’ reporting, there was a letter that the Buffalo School Board had received from Gary Orfield,

The letter is reproduced here, along with three emails between Mr. Orfield and Carl Paladino. Cue the “that escalated quickly” meme.

Orfield wrote to the director of the New York Regional Office of the federal Education Department’s Office for Civil Rights. In it, he references an exchange of emails he had in late January with Board Member Carl Paladino. He expresses concerns that  Paladino made “a clear effort to control my work and intimidate me.”

The local victims of Paladino’s intimidation and bullying are all accustomed and familiar with his hateful, intemperate vitriol, and more importantly the ease with which he gets away with it. But Dr. Orfield is from California and isn’t used to primitive thugs pushing him around.

The Buffalo school district and Office of Civil Rights agreed to carry out a study examining the fairness of admission to Buffalo’s so-called “Criterion” schools. Orfield’s Civil Rights Project out of UCLA was hired to undertake an investigation and survey, and to make recommendations to the District and OCR regarding its findings. Its investigation is not yet complete, and is in no way controlled by the school board.

When one group came to Orfield for his opinion on a turnaround proposal for a high school facing closure, Orfield said he could not offer any such opinion, and added that no major decisions regarding school space should be undertaken until his group had completed its investigation and made its recommendations, pursuant to their contract. Any decision to rededicate school space to some other use before Orfield’s investigation is complete, “could make solutions less workable or more expensive, possibly undermining the agreement”.

Paladino wrote to Orfield in response to that, and the emails are here and speak for themselves. In short, Paladino would hear none of it. He controls a majority, and everyone else can go to hell.

Orfield’s takeaway from Paladino’s reaction was this:

Orfield says that in 35 years of doing this,

He goes on to say what few have the courage to say,

Dangerous. Disrespectful. Raises serious civil rights issues. Orfield responded to Paladino’s whining by maintaining his professionalism, starting with a biting, “I was very sorry you could not make it to the session where I met with interested board members”. He continues,

It seems to me that hurrying major changes in the midst of a serious civil rights investigation needlessly risks more civil rights complaints because it limits future options and limits the work…it is much better to work things out professionally than to get involved in escalating investigations or possible enforcement or litigation that could risk federal funds and put great stress on the district and its leaders.

To this, Paladino lost what was left of “it”. “Nonsense” with respect to the Justice Department? The federal government became involved in response to complaints of racial discrimination in the admissions process for Buffalo’s eight criteria-based schools. The team of researchers from UCLA just began its work in December. If the district runs afoul of its agreement with the Justice Department, it could lose millions in federal aid and open itself up to prosecution and lawsuits. How is that good for the district? Is that how one runs something, “like a business”?

Another pressing matter relates to four “failing” or otherwise underperforming schools, and proposals to turn them around. Paladino’s majority submitted a plan recently, which can be found here. It blames the Buffalo Teachers’ Federation for refusing to agree to adjust its work rules, and proposes phase-outs of three schools, setting up four new charter schools, and using “surplus” space in the schools being phased out for new and existing charters. It proposes to use the threat of closure as a negotiating tactic to force the BTF to surrender. Members of the community from each affected school also presented turnaround proposals.

The fact that these schools are labeled as “failing” aside, little if any of what is happening in the Buffalo district smacks of good governance.  Even more tragically, at a time when that district needs strong but responsive — if not compassionate — leadership, it has nothing of the sort.  Devolving instead into political grandstanding and backbiting, the reputation of the district suffers, and the students are used as pawns in a colossal game of chicken.

This is why Dr. Orfield’s accusation against Paladino’s apparent bad faith is so critical here. Without responsible people coming together in good faith to resolve differences, negotiate in the kids’ best interests, and to reach consensus, nothing gets accomplished. Threats and ultimatums don’t generally lead to good results — only resentment and power struggles.

If these people all truly have the kids’ best interests at heart, then it’s imperative that someone lead. Not just by barking orders, but by example.

Pity the poor parents and kids who suffer under this bombastic collection of self-interested amateurs calling themselves a board of education. For all the good progress that Buffalo has enjoyed over the past several years in other venues, the epic dysfunction of the city’s educational system casts a depressing pall over that progress.