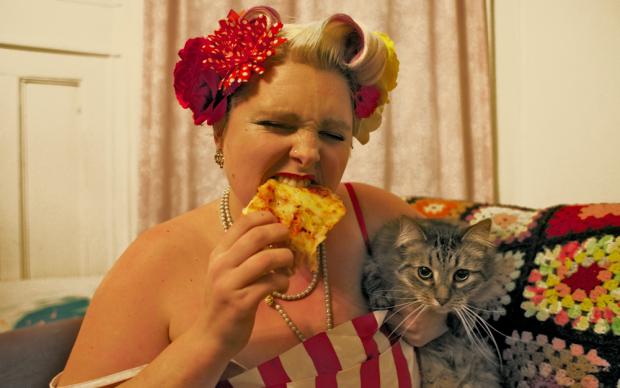 Valentine’s Day is a Hallmark profit margin invented so that single people looking for love feel like shit, while those who are coupled spend money doing something that should be part of everyday life: celebrating their love.

I’ve never bought in, but still felt awful when none of the boys gave me a Teenage Mutant Ninja Turtles Valentine. My first Valentine was a dozen red roses “from your secret admirer,” words written in my grandmother’s beautiful cursive writing; I’d told her I was sad because I’d never had a Valentine.

Now I am rapidly approaching 30 and I’m not depressed when my grown-ass self has to buy the wine, chocolate, plush unicorns, and rainbow roses that other girls receive. If being single means that I am going to Netflix and chill while eating a whole heart-shaped pizza with my cats this Valentine’s Day, then I’m not mad. I relish being a lone wolf. Our dating topography consists of one-night stands, long-term relationships, and unrequited love.The best art comes from a broken heart but don’t ever blame someone for breaking yours; it’s not their fault that they don’t feel the same as you. Maybe you came on too strong or not enough; maybe you’re both bottoms; or perhaps it’s chemical.

I want someone to be my lover and best friend who understands my weird. Perhaps I will find them on OKCupid or Tinder? The glow: illuminated face, eyes glazed, dilated, drooling mouth ajar, and a muscular thumb ferociously swiping and sexting the filthiest things, attempting instant action. A profile with your hottest photos showing how witty you are, talking about the books and shows you enjoy, which food porn gets you off, and all the adventures you are down for. Thinking that your soulmate is only a click away is not unrealistic—you hear success stories all the time—but then there are the jerks. I love the guys posing sexy with a deer carcass in front of their prized pickup truck; buff, headless, oiled-up torso pics; photos from which he poorly cropped another woman. The best is when all of the pictures are of a guy and his best bros at a Bills game.

I know a bartender who created a Tinder profile for her co-worker, invited all the guys who responded to their bar, then threw her to the wolves.

Another horror story: A woman who’d had pretty good experiences with internet dating was about to go out with a new guy. Before the date she was chatting with a friend, who recalled a terrible online date she’d had—the guy assaulted her, even biting her. After some conversation, the friends realized that it was the same guy that the woman was about to go meet. Needless to say, she didn’t go.

There’s the woman who made eyes at a guy at the Pink and found a craigslist missed connection about it the next day. After a couple dates he told her he loved her, but she did not feel the same way.

There’s the guy who wanted an instant blow job in the bathroom without even buying her a drink, who said he was antiques dealer but was actually a metal scrapper. There’s the grumpy Canadian girl who just wanted sex, the boring fireman with no good life stories, the Tim Horton’s parking lot groper, the soccer player with a mom complex, and the man who was into line dancing and had a noticeable toupee. There’s the man who pooped himself awake while cuddling.

My best friend met her current love on Tinder. He’s Canadian. (Ever notice all the hot ones are north of the border?) She told me that she was going to meet him and gave me his address and full name just in case she went missing. He ended up being awesome and now they are engaged, so it’s a happy ending.

I detest the idea of instantly swiping someone to one side based on looks alone—the idea of judging a man by the photo on his profile. For true life success you have to let go of harsh criticism and the idea of having a “type”; I have fallen for people who were much shorter, chubbier, or less employed than the lover I see in my dreams. I wasn’t settling, either, just being realistic and open. Give people a chance! You don’t want to be judged by your skin-deep superficial flaws. This instant gratification hook-up culture we live in is scary: It objectifies people, glorifies rape, and spreads diseases. I want to meet my perfect mate while volunteering, marching at a protest, wandering at a music festival, staring teary-eyed at modern art, or reaching for the same feminist book at the library. Love comes when you least expect it. Live life with purpose and you will find your bliss.

Cat McCarthy is a visual and performance artist, a burlesque and drag performer with the Stripteasers, part of the Queen City Kings and the Vintage Vaudville Caberet, founder of the Buffalo Burlesque Collective, visual arts coordinator for the Buffalo Infringement Festival, and a volunteer for Food Not Bombs.