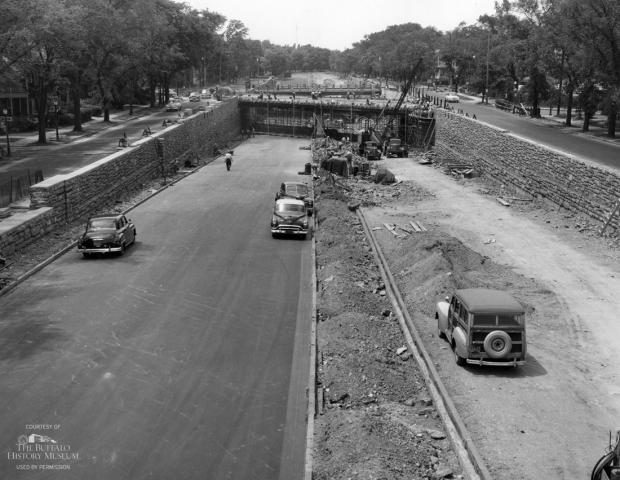 “If this is really to be a connecting link of the Thruway it means that eventually all of Humboldt Parkway, beginning at the Science Museum, will be affected.” –Dr. William E. Potter, Secretary, Main-Humboldt Taxpayers Association, 1950

The Main-Humboldt underpass, started in 1950, was the first project in what eventually became Buffalo’s expressway network. In this photograph taken for the New York State Department of Public Works in 1952, the tunnel beneath Main Street and Kensington Avenue is nearing completion. This 1,600-foot segment of a much larger highway plan—outlined by New York State in its Buffalo Urban Area Report in 1946—was bitterly opposed by neighborhood residents. At a 1949 public meeting, Main-Humboldt Taxpayers Association president Robert M. Hitchcock called the project “the dumping of a mass of concrete into a beautiful neighborhood.” Backing residents, Council President Peter Crotty said that the underpass would serve only “to sound the death knell of Humboldt Parkway and Delaware Park.”

Labor and business interests colluded to drown out citizen opposition. “Buggies no longer run on Humboldt Parkway on Sundays. The automobile is here to stay and it’s time we realize it,” said Hugh Thompson of the CIO. Horace Carpenter, president of the Chamber of Commerce, declared the underpass was “a step forward in solving an aggravated traffic problem.” Mayor Mruk cleared the way in 1950, appropriating the city’s modest share for the mostly state-funded project. The loss of the parkway and 250 elms was called not vital by traffic engineer Elmer G. H. Youngmann. The underpass opened in 1952. By 1953, the project was extended with the opening of a 1.6-mile “Humboldt Parkway Extension” through Delaware Park to Delaware Avenue. In increments, the highway system continued its march of progress.