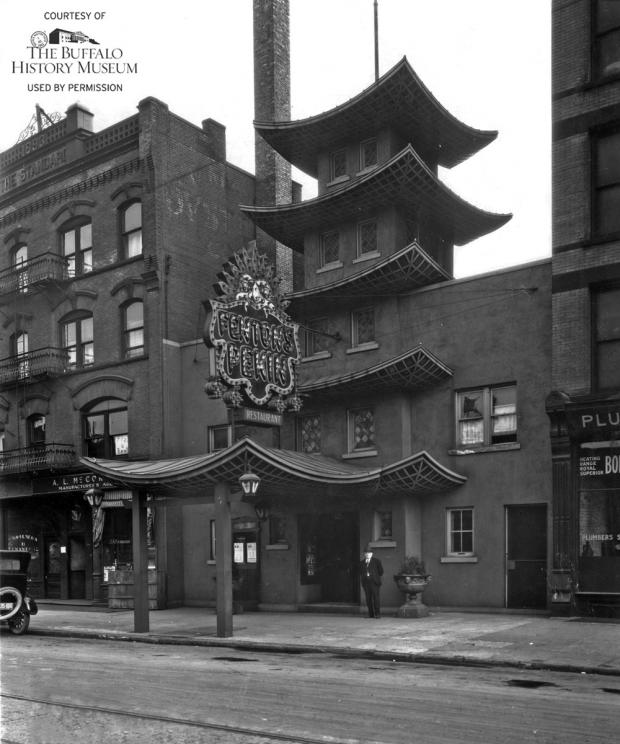 “It is putting it mildly to say that the first sight of ‘Pekin’ will cause thrills of amazement, admiration, and delight.” —Buffalo Courier, October 3, 1915

Fenton’s Pekin, 85 Broadway, was one of the great pre-Prohibition pleasure palaces of Buffalo. Opened in 1915 by Nathan Fernandez, better known as Nate Fenton (and pictured here), the American and Oriental cabaret was thronged nightly by patrons lured by chop suey, singing and dancing waiters, and jazz and vaudeville acts.

The Pekin was designed as a Chinese pagoda by Emerson C. Dell, who sought to craft an attraction which “embodies the weird, fantastic, yet strangely beautiful ideals of Chinese artists, architects, and dreamers.” Five tiers of flaring fan-like projections rose one above the other and spreading out on all sides of a high tower. Over the entrance on Broadway, a flashing blade sign depicting a Chinese dragon was “fearsome of aspect” and “a mass of glowing and riotous color.” The interior finish was of burnt wood, in the tradition of Chinese temples. Along the bottom of the upper-level gallery where patrons could watch the swarming crowd, “great gold dragons flashed red and green eyes at intervals amidst the smoke of hundreds of cigarettes.”

The slogan of the Pekin was: “If drinking interferes with your business, give up business.” Then came Prohibition. After 1920, repeated raids discouraged the after-theater throngs, and the business declined. In 1922, Fenton sold the Pekin to the Buffalo Evangelistic Association, which made it the first site of the City Mission, now in operation at 100 East Tupper Street.

Today, the block on which Fenton’s Pekin was located is home to 77 Broadway, an office building.