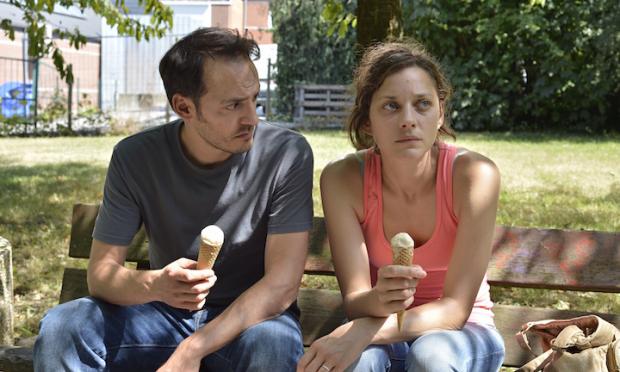 If Jean-Pierre and Luc Dardenne, the veteran Belgian filmmaking brothers, thought that casting Marion Cotillard, the Oscar-winning French actress (for her portrayal of Édith Piaf in La Vie en Rose), would enhance their prospects for a foreign-film Academy Award nomination of their latest, Two Days, One Night, they must have felt some disappointment when the nominees were announced this year. No such luck, the same as every year they’ve been eligible. And they’ve been working at this for over three and a half decades. The brothers have conceded they wouldn’t mind a nomination at all. Always, when they’ve made features—they’ve also done documentaries—they’ve used actors whose names would almost certainly stir no recognition among Academy voters. This time, they went with an international star, to no avail, if that was their game. Aesthetically, it would be difficult to argue with that choice. Cotillard is quietly but compellingly effective.

As Sandra, the movie’s lead character, she’s first encountered in bed, although it’s the middle of the afternoon. There’s an immediate hint of personal difficulty. Almost as quickly, a phone call informs her of additional, concrete trouble. She’s being fired from her job at a small solar panel factory. We learn that Sandra has been on leave after an emotional breakdown. In her absence, her bosses, especially a belligerent foreman, have offered her co‑workers a 1000 Euro bonus if they’ll vote to oust her. And they have, by a tally of 14-2.

At the urging of a sympathetic friend and her husband (Fabrizio Rongione), Sandra, already in a fraught place, undertakes to individually contact as many of the other employees as she can to ask them to change their vote in a second ballot the plant manager has reluctantly agreed to abide by. She has one weekend to do this.

This skillfully unemphatic movie follows Sandra as she tracks down and approaches these employees to make her case. As her husband has pointed out, the couple, who have two very young kids, can’t afford their modern apartment if she’s unemployed. Two Days, One Night develops its own kind of modestly pitched tension as Sandra drives herself to ask her co‑workers to make a sacrifice on her behalf. These brief meetings are also emotionally resonant because the employees are mostly in the same socio-economic boat as she is. The bonus—which amounts to a kind of blood money—is something many of them believe they need. These aren’t people with a lot of economic leeway in their lives. In hurried, uncomfortable conversations, several apologize to her for their votes, even as some decline to change them.

Part of the Dardennes’ success lies in their ability to persuasively present little portraits of people challenged by social circumstances and pushed into very difficult choices. The bad choices the Dardennes’ characters sometimes make usually don’t render them unsympathetic. The brothers can forgive, or at least understand, the damage that may result in consequence of their actions. In perhaps the Dardennes’ most conspicuous invention, in L’Enfant from 2005, Bruno, a fecklessly amoral lumpen youth, sells his newborn baby to an adoption ring, and spends the rest of the movie desperately trying to retrieve it and to redeem himself with his stricken girlfriend.

Most of the workers Sandra importunes would rather not have done what they did. There’s the young Middle Eastern man who starts to tear up as he expresses his regret beside a soccer field on which he’s just been playing. A young gay man tells Sandra that he should have voted for her, but his lover is unemployed and they can’t afford to reject that money.

The movie hardly harps on it but a theme of a fundamental labor-management conflict can be discerned. As part of the bargain the company has struck with the workers these people will have to take up the slack Sandra’s absence will entail. In the brief parking lot conversation, the manager tells Sandra and her friend that Asian imports are threatening profits. Everyone is a victim of market forces, but a few have more room to maneuver than most people.

With the exception of only one jarring turn, the Dardennes eschew sharp dramatic conflict. Their tone is calmly observational but clearly there’s a knowing sensibility at work, too.

At the very end, in a shot that’s strangely reminiscent of the last one in John Ford’s 1939 Young Mr. Lincoln, Sandra walks away from the camera, down the road toward a moral victory.