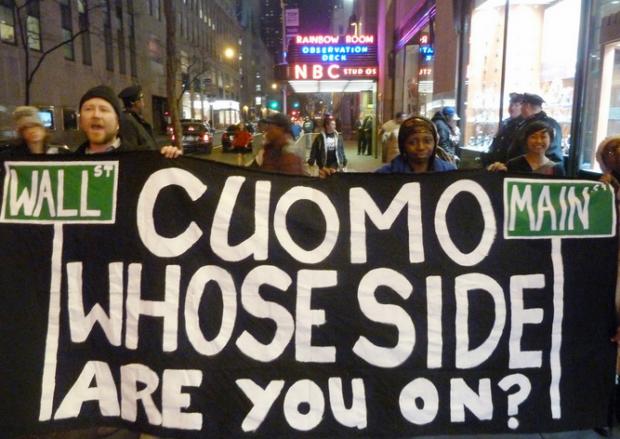 The quoted text below is an open letter to Governor Cuomo penned by seven recent New York State “teachers of the year.” It comes in response to the Governor’s astonishing criticism of teachers—not the teachers’ union, but teachers themselves—during his state of the state address in January.

It also comes with the context of something confusingly referred to as the “Gap Elimination Adjustment.” The GEA is Albanyspeak for “starving public schools to help balance the state’s budget.” Some might say that the GEA starves schools of funding to cover Albany’s own profligate overspending, and that underfunding schools will lead to poor results and will help promote the school privatization agenda.

The Gap Elimination Adjustment pulls money out of local districts, placing financial hardship on them and forcing them to raise school taxes in order to adequately fund basic district needs. It should come as no surprise that, when given the opportunity, Albany picks the most harmful and cynical way to “govern.”

Dear Governor Cuomo: We are teachers. We have given our hearts and souls to this noble profession. We have pursued intellectual rigor. We have fed students who were hungry. We have celebrated at student weddings and wept at student funerals. Education is our life. For this, you have made us the enemy. This is personal. Under your leadership, schools have endured the Gap Elimination Adjustment and the tax cap, which have caused layoffs and draconian budget cuts across the state. Classes are larger and support services are fewer, particularly for our neediest students.

We have also endured a difficult rollout of the Common Core Standards. A reasonable implementation would have started the new standards in kindergarten and advanced those standards one grade at a time. Instead, the new standards were rushed into all grades at once, without any time to see if they were developmentally appropriate or useful.

Then our students were given new tests — of questionable validity — before they had a chance to develop the skills necessary to be successful. These flawed tests reinforced the false narrative that all public schools — and therefore all teachers — are in drastic need of reform. In our many years of teaching, we’ve never found that denigrating others is a useful strategy for improvement.

Now you are doubling down on test scores as a proxy for teacher effectiveness. The state has focused on test scores for years and this approach has proven to be fraught with peril. Testing scandals erupted. Teachers who questioned the validity of tests were given gag orders. Parents in wealthier districts hired test-prep tutors, which exacerbated the achievement gap between rich and poor.

Most of us have failed an exam or two along life’s path. From those results, can we conclude that our teachers were ineffective? We understand the value of collecting data, but it must be interpreted wisely. Using test scores as 50 percent of a teacher’s evaluation does not meet this criterion.

Your other proposals are also unlikely to succeed. Merit pay, charter schools and increased scrutiny of teachers won’t work because they fundamentally misdiagnose the problem. It’s not that teachers or schools are horrible. Rather, the problem is that students with an achievement gap also have an income gap, a health-care gap, a housing gap, a family gap and a safety gap, just to name a few. If we truly want to improve educational outcomes, these are the real issues that must be addressed.

Much is right in public education today. We invite you to visit our classrooms and see for yourself. Most teachers, administrators and school board members are doing quality work. Our students and alumni have accomplished great things. Let’s stop the narrative of systemic failure.

Instead, let’s talk about ways to help the kids who are struggling. Let’s talk about addressing the concentration of poverty in our cities. Let’s talk about creating a culture of family so that our weakest students feel emotionally connected to their schools. Let’s talk about fostering collaboration between teachers, administrators and elected officials. It is by working together, not competing for test scores, that we will advance our cause.

None of these suggestions are easily measured with a No. 2 pencil, but they would work. On behalf of teachers across the state, we say these are our kids, we love them, and this is personal.

Some backstory on the Cuomo war with teachers is found here.

To add insult to injury, the Cuomo administration refuses to release to school districts estimates of how much state aid they’ll receive this year. Instead of helping local taxpayers and districts by maintaining some level of predictability in the process—if not adequately funding by finding other ways to “adjust” the state budget in order to accomplish “gap elimination”—Cuomo’s Albany is keeping them in the dark and making it painful for districts to formulate their own budgets.

Are districts to assume they’re receiving the same state aid as last year, or are they to assume no aid whatsoever and shunt all of the lost funding on local taxpayers? If it’s the latter, districts throughout the state will face outright tax revolt, and the goal of the wealthy privatizers will be closer to reality—as a reminder, here’s the thumbnail equation: