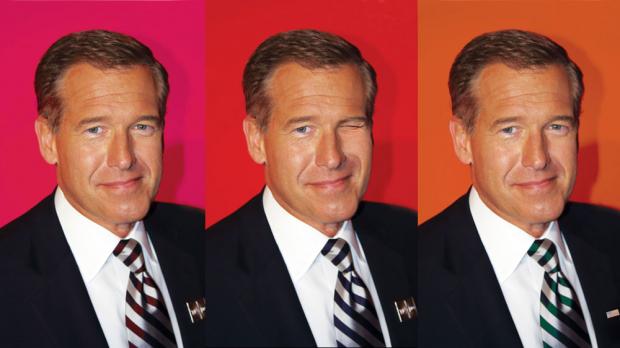 Brian Williams, anchor and managing editor of NBC Nightly News, announced Saturday that he was going into seclusion while everybody figures out what to do about his oft-told story about having been in a helicopter forced down by a rocket-propelled-grenade in Iraq, which turns out not to be at all true. Williams was in a helicopter that came on the scene maybe a half-hour later. In a firefight, half an hour is a serious amount of time. It is forever.

Some people are excoriating Williams for having expropriated the experience of other people and made it into his own. Some are calling him a flat-out liar, a media pro who used the situation to pump up his own career.

According to the Stars and Stripes website, “The NBC online archive shows the network broadcast a news story on March 26, 2003, with the headline, ‘Target Iraq: Helicopter NBC’s Brian Williams was Riding in Comes Under Fire.’”

A pause here: As every reporter knows, you don’t write the headlines above your copy or, in the case of TV reporting, preceding the edited version of your feed. The incident happened in 2003, almost 12 years ago. Did Williams make the claim then or did he ease into it over time? In the years in between, was he lying? Was he misremembering? Was he conflating narratives? Was that initial headline out of New York something in his feed or something a desk guy decided would play well that night?

I don’t have a clue. Who ever knows what is in someone else’s heart or mind? Where is the truth, in the heart or the mind?

Until NBC releases the reports Williams filed in those first days, none of us will know the truth of the first part of this story.

Memory is not a hard drive or a book. It is active, ever in flux, ever reconfiguring things as bits of information that seemed irrelevant at the time take on, because of other information, new significance and not only fit into, but change the story.

I can imagine Williams putting himself into that RPG moment from the beginning; I can also imagine him looking back on the aired and edited and headlined footage and buying into that narrative constructed by others and making it his own with no malign intent whatsoever.

I have two specific examples of that, one about me, the other about Warren Bennis, UB’s first provost.

At a conference on Western films in Sun Valley in 1976, Peter Fonda told a wonderful story about his father preparing for a fast-draw scene in the film Warlock. Henry was out there by the pool, whipping his pistol out, reholstering it, whipping it out again. A guest was there for dinner and said, “Hank, come on in.” Fonda said he couldn’t: He had this scene in the morning in which he had to be a fast draw. The friend said they could undercrank the camera (shoot the scene at maybe 18 frames per second rather than the normal sound speed of 24 frames per second), which would speed up the apparent physical action. Fonda said they couldn’t do that because his character wore a Phi Beta Kappa key and it wouldn’t swing at the right speed. The visitor said, “No one will notice that.” “But,” Fonda said, “they’ll feel it.”

That became for me one of the key statements on what doing art is about: the micro things you do that no one will ever notice—but they’ll feel it.

I don’t know how many times I told that story.

Then, when I was working on a book about narrative, I listened to Peter’s story on tape. It was nothing like the story I’d been telling for years, or like the one I just told you. There was no dinner guest. There was no dinner. It was just Peter’s dad out by the pool practicing his draw. Peter’s story went on over days; mine was just before dinner. Peter’s story was about his relationship with his father. I, without any notion I’d changed a word, turned it into a story about making art.

All the years I told that story, I thought I was telling the story Peter Fonda told about his dad. Maybe 30 years later I realized I was hypothesizing a story about what artists do.

Warren Bennis and I came to Buffalo in fall 1967. He left MIT to become dean of Social Sciences; I left Harvard to become an assistant professor of English. A mutual friend with whom I’d been teaching at Harvard, Norman Zinberg, said we should meet before we left Boston.

So I went to Warren’s Boston house for a Sunday brunch in May 1967. Saul Tauster, a poet and lawyer for Martin Meyerson, who was then UB president, was also there, as was Warren’s wife Clurie.

During the brunch, Saul got a telephone call from an assistant dean of Arts and Letters at UB telling him that Leslie Fiedler—then on the UB faculty and perhaps the best known literary critic in the United States—had been arrested on a drug charge.

The charge was bogus and it eventually went away but it caused a big stir for a while.

Here is why I’m telling you about it here, in this article about Brian Williams: In the early 1990s, after Warren and I hadn’t seen one another for a while and we were catching up, and he was introducing me to his current wife, he told a story about when Martin Meyerson was hiring him for the Buffalo job, the phone rang, and it was that same assistant dean telling him that Leslie had been busted. When he finished, I pointed out that in the academic world, deans are hired in the fall, and that Leslie had been busted in May, and I had been the one in the room when the phone rang.

Maybe five years later, we all were having dinner again in Los Angeles, and Warren again told the story of Leslie’s arrest, and again put Martin in my chair. We all paused and he looked at me and said, “I did it again, didn’t I?”

Both times, Warren, author of maybe 35 books, one of my closest friends, told a story that made sense, that worked, but which, in fact, collapsed two events seven months apart and subtracted the least relevant person—me.

Memory does that. It’s not always our friend. If you’re a novelist, it’s great because you can riff everywhere you wish. If you’re trying to deal with reality, it may not be your best source of information.

Memory, as those two stories I just told you, tunes the past for your immediate purposes and it collapses events for economy. I heard Peter Fonda talk and the story I took from what he said (which was not his story) was about the making of art. Warren Bennis had two visitors to two brunches and subtracted the less important of the two—me—in service of the story.

So what about Brian Williams?

Did Brian Williams make it up or did he do what we all do: Let the story trump the facts.

The past few days I’ve heard people frothing about what a scoundrel and liar he is, and others saying things get confused and conflated in time.

I guess it depends on when he started telling the story of being under fire. If it was in the moment, on the day that NBC headline got posted, he’s in trouble. If it was years later, when he slipped into the story others were already telling, a story in which he was a participant, I don’t think we should be too quick to judge.

Memory, as I said, is ever on the job. What was there yesterday may not be there today. Memory is constantly reconfiguring and making new sense of the past, adding details it picked up along the way, dropping details that no longer fit, always configuring a story that makes the best sense of things it can.

The fact that you remember something doesn’t mean it happened; it means only that you remember it. The novelist John Barth (who was some years back a member of the UB English Department) put that another way: “The story of your life isn’t your life. It’s your story.”

Bruce Jackson is SUNY Distinguished Professor and James Agee Professor of American Culture at SUNY Buffalo. He is the author of The Story is True: The Art and Meaning of Telling Stories, 2008.