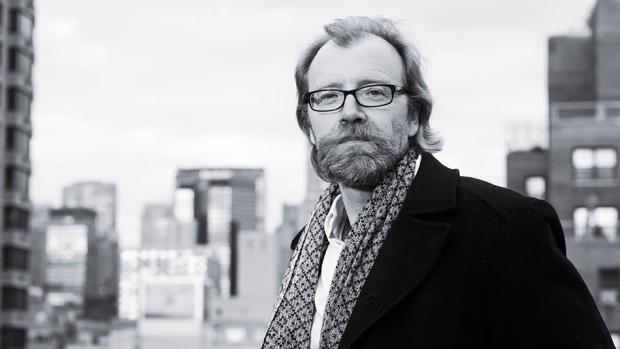 Lincoln in the Bardo
By George Saunders
Random House, February 14, 2017

We’re dropped into the chilly Washington of February, 1862: “a nation that had known little of sacrifice” (as one historian puts it) is beginning to witness the enormous toll of a Civil War just beginning; the unpopular President Abraham Lincoln is tasked with saving a nation that inked its doom into its own Constitution; and his son Willie is dying of typhoid.

It’s a setting begging for a sweeping panoramic treatment, an American epic, but, after a dazzling collage of accounts from the Lincoln’s first, lavish reception, a party Willie only heard from his deathbed, most of the novel takes places at night, in the Georgetown Oak Hill Cemetery, which is a bardo, a sort of Tibetan Buddhist purgatory. Outside, the nation is at its most vulnerable. But, like the spirits that inhabit it, our concerns are mostly kept inside the fence. Instead of giving us a hero-tale like The Killer Angels, Saunders focuses tightly on the day of Willie Lincoln’s death and the night after the funeral, when the president returns to the crypt to cradle the corpse—like an “American Pietà,” Saunders says, an image that’s plagued him through countless attempts to write this book since about 1994. To tell this story, Saunders animates a dizzying heteroglossia, an American chorus of historical commentary, eyewitness accounts, and invented characters—a president and his hatemail, slaves and servants and soldiers, eloquent voices and voices just this side of silence—a bold formal leap forward in an age when doubting the novelist’s potential to innovate is a commonplace. (And, on that note, the audiobook promises to be an extraordinary achievement in its own right, with a chorus including Nick Offerman, David Sedaris, Don Cheadle, Bill Hader, Rainn Wilson, Lena Dunham, and Jeff Tweedy—along with Saunders himself and another 158 voices.) As a short story writer Saunders is a living master, peer to Flannery O’Connor and Anton Chekhov. Now he’s more than proved himself in a new medium: Not since John Dos Passos has an American novelist dared so much.

The pleasures of the book are not all style, sound, and slapstick. While staging a battle over Willie Lincoln’s soul, Saunders also limns a dozen kinds of thwarted loves; he gives voice to the unspeakable horrors of rape and of slavery—while somehow acknowledging that these remain unspeakable; he captures a painful but not hopeless tableau of American racism; and he renders anew one of the most studied, analyzed, vilified, and revered figures in human history. Like one character in the “bardo,” a once-enthusiastic hunter fated to acknowledge and caress and pour attention and affection into each creature he killed while living, Saunders also reverently acknowledges all those sense-ephemera that make life so precious, and so difficult to give up—“a gaggle of children trudging through a side-blown December flurry…someone remembering to write; someone noticing that you are not at all at ease…Geese above, clover below, the sound of one’s own breath when winded.” He captures the fleeting-ness of all that is fleeting, from memories to life itself: we come to understand, with Lincoln, that “all things started as nothing…but we named them, and loved them, and, in this way, brought them forth. And now must lose them.”

If there is a question at the heart of the book—How do we live (together and apart)?—then it’s a question grounded in a “conditionality,” one Saunders and Zadie Smith teased out in a recent conversation, which he phrases like this: “1) we’re born to love, and 2) all that we love will eventually disappear (as will we).” Not since John has any great writer peddled revelations—Saunders doesn’t—but the experience of reading this book, a prolonged, intense awareness of this “conditionality,” forces us to confront questions to which our daily duties and preoccupations usually leave us numb.

This is the realization Saunders’s Lincoln comes to toward the end of the novel: “that whatever way one took in this world, one must try to remember that all were suffering…that his current state of sorrow was not uniquely his,” and that all people are “Perennially outmatched by circumstance, inadequately endowed with compensatory graces.”

Better than any critic, Saunders here describes all the characters he’s produced in more than 20 years as “satirist,” “saint,” short story writer, and now novelist. These are the qualities that make his characters so compelling—and so easy to inhabit. It’s time to say that Saunders, in Lincoln in the Bardo, has ascended into that rank of writers who, perhaps once a century, distill in words and images one of the irreducible elements of the human condition, theretofore undefined. We have the Quixotic for indefatigable romance, or as Harold Bloom puts it, “a persuasive awakening into mortality.” We have the Karamazovian for the human tendency to excess: of feeling, belief, idiocy, guilt, sacrifice. We have the Kafkaesque for the vast cruelty of all that we cannot understand. And now we have the Saunderseque: an awareness of humanity as “Perennially outmatched by circumstance, inadequately endowed with compensatory graces”—a beautiful thing, as h renders it here.

Spirits in the bardo realize they can cohabit and coexist, in the most radical sense of the word—with each other and with living humans—and in this way find hope, at least, of some redemption, of doing some good that will matter. As Saunders carries his experiment in metempsychosis, intelligent empathy, to its exquisite conclusion, the reader begins to wonder if this isn’t limited to the bardo, if it might be achieved in the “real” world.

As “new” an achievement as this is, Lincoln does grow out of Saunders’ previous work—in many ways, it seems like an act of alchemy on the elements of “CivilWarLand in Bad Decline,” the title story of his first collection—one that seems much gentler now than it did to critics when it was published in 1996. Other works by Saunders seem like precious antidotes to the present—The Brief and Frightening Reign of Phil, about the rise (and fall) of a fear-and difference-baiting demagogue, or The Very Persistent Gappers of Frip, an illustrated children’s book about community, generosity, forgiveness, and the opposites of these virtues. Lincoln in the Bardo is something more. There is disappointment in finishing the book—disappointment that it is over and that you will never have the chance to read it for the first time again. There is comfort, too, because you can return. But there is something more: It’s a sense of being reborn, that you’ve earned a second chance at life, and that this time, you might do it all better.

Aidan Ryan is a writer, editor, and adjunct professor at Canisius College, a regular music critic for The Skinny, and co-editor of Foundlings poetry magazine.