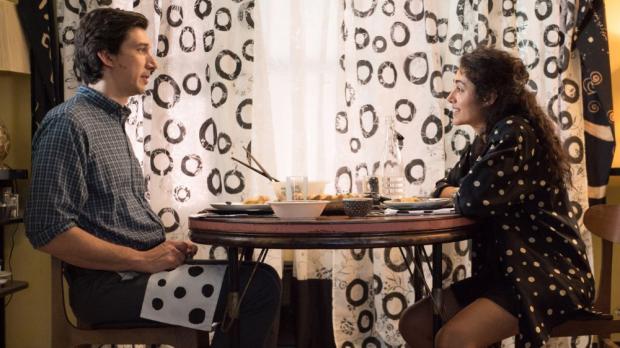 He wakes up every day at pretty much the same time, between 6 and 6:30. He has an old-fashioned alarm clock on his nightstand, the kind with a dial that you have to wind up, which might go off if he oversleeps, but he doesn’t in the week we spend with him. He has Cheerios for breakfast in a kitchen with a cornflower casserole dish on the stove. While he eats he examines a box of Ohio Blue Tip Matches, which he thinks about as he walks to work.

He drives a bus in the city of Paterson, New Jersey, a pleasant small city whose name he shares. His job doesn’t command all of his attention all of the time. He likes to listen in on the conversations of the people riding behind him. And he thinks about that box of matches, which provide him with an image that he will turn into a poem, a few lines at a time.

It’s not that Paterson (Adam Driver) is a “poet.” But he writes poetry. And that difference is the basis for this film, named after him or the city, probably both, which is the loveliest, most heartfelt movie Jim Jarmusch has made in more than three decades as a filmmaker.

Jarmusch made his reputation in the independent film boom of the mid-1980s as an ironist, a hipster before the word became popular and maligned. He championed black-and-white photography, archaic music, and cities. If he helped inspire a generation of young people who took up those things as an affectation, you can’t hold it against him.

His early protagonists were people out of step with their environments, always a choice subject for humor. As he progressed, his work became increasingly about homage, to writers like William Blake or older filmmakers like Ozu and Melville. It got to the point where his last feature, Only Lovers Left Alive, sank under the weight of its references: under its trendy vampire story, it seemed to exist only as a way for Jarmusch to name-check all of his favorite writers and musicians.

But while Paterson has its patron saint—the poet William Carlos Williams, a native son of the city where the film is set—it scarcely matters. This is a portrait of simple life, almost idyllically so, and of a man who finds in poetry a vehicle for appreciation.

The opening 10 minutes or so would make a perfect short film in and of itself, containing almost everything to be found in the rest of the film. Paterson’s week follows a comfortable routine. He works, he has dinner with his wife Laura (Golshifteh Farahani), who is understanding of him while being different enough to maintain an active chemistry. After dinner he walks the dog and stops by the local bar for a beer. This is the kind of gin mill where people can chat, play chess, and play jazz on the juke box. (If you’re of a certain age, you’ll remember Anacones on Bailey.) When someone asks the owner/ bartender, “You’re never gonna get a TV in here?” he thunders, “Hell no!”

Is much modern life like this? Of course not. When was the last time you were in a bar that didn’t have a TV set? Or even fewer than a half dozen of them? Paterson’s Paterson is an idealized place, where the downtown is still thriving yet not congested. (Jarmusch is clearly not a guy you will ever find in an urban lifestyles center.) There are no cel phones, even if the movie acknowledges that they’re sometimes a necessity, which is what sets this apart from being an American version of the Kinks’ ode to all things antiquated, “The Village Green Preservation Society.” Does Paterson have all that he needs? For the time being. What’s more important is that he values everything that he has, and that makes him a man to be envied.

If you live in Los Angeles and you’re a member of the Academy of Motion Picture Arts and Sciences, you can attend special screenings of the films nominated for the Academy’s annual awards show, which you may know as the Oscars. The rest of us have to see the nominees where and when we can. But if you want to be one up on your peers in the range of awards about you can make an informed prediction, you’ll want to head to the Eastern Hills cinema this week to see either or both of the programs compiling the nominees for Best Live Action and Animated Short Film awards.

In the past these have been categories spotlighting work of an experimental bent, from newcomers or from filmmakers looking to try out new ideas that might not deserve a full-length film. (A short film is defined as 40 minutes or less.) The categories have somewhat unfortunately been taken over by resume builders, up-and-comers using short films as a means to get into the big leagues. Still, the programs offer much to recommend them, and if you don’t like a film, it gives way before too long to another contender. If you can only get to one of the two, I recommend the animated shorts, where the most imaginative and surprising work is to be found. One warning: At least two of the five nominees are not terribly kid-friendly. My favorites, if you want to compare notes, are the animated “Pearl,” a wordless gem about a father and daughter, and “Timecode,” about two co-workers who get to know each other through dance and the security cameras they are tasked to monitor.