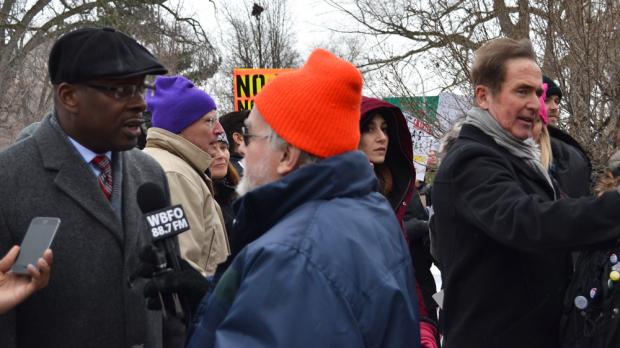 Some Washington Democrats with whom we speak imagine that their internal struggle will be resolved soon, and that the Bernie Sanders “insurgents” will triumph over the Hillary Clinton “pragmatists.” Other Washington Democrats believe that the advent of socialists in the Democratic Party is either a distraction or a disaster, and that the explicitly identity-focused coalition of groups that was the Clinton coalition, funded by Hollywood and Wall Street, just narrowly missed national victory, and that it would be completely nuts to disassemble what almost worked.

It’s early days yet. While the Washington Democrats hash it out, The world’s focus will continue to be on a White House that moves messaging faster and more disruptively than any operation anybody has ever encountered since Ronald Reagan’s team limousined into town in 1981. The Reagan ascendancy came, however, with allies: the Tories under Margaret Thatcher had won in the United Kingdom in 1979, and the powerful political rhetoric focused on the phrase “the free market” had a deep and broad legitimacy with intellectual elites, with established media from the Times of London to the Wall Street Journal to approximately half the editorials published in the New York Times, plus a broad swath of university intellectuals and think tanks, plus an institutional presence in every American town big enough to have its own Chamber of Commerce. All of that, all that co-operating positive messaging about an alternative future of growth, personal liberty, freedom, and forward-looking cultural empowerment had triumphed over a diffuse message carried by a damaged Jimmy Carter.

But back in 1981, Democrats still had Tip O’Neill, Danny Rostenkowski, and rising stars like Gary Hart, plus a presidential-candidate-in-waiting in Walter Mondale. Democrats had labor. Democrats had Congress, cities, some internal national consistency.

Now, in every media market, the Trump messaging dominates—and because national Democrats are unsettled about whether they are energetic Millennials who want economic progressivity and economic nationalism, or whether they want their diverse coalition of identities that literally embraces the world, the Trump messaging is also dominating Democrats.

In every media market where there has been a demonstration against Trump’s (wilfully?) clumsy executive order on immigrants and refugees, the simplifying dualism of local media that always pushes simple oppositions has done its job for Trump, thus: Trump has a platform to denounce Muslim immigrants, refugees, courts, and the mainstream media, while the face of the opposition to the man who says “I’m protecting the homeland” has been brownish, lawyerly, liberal, and scolding. As a political branding exercise, it’s been textbook. To Trump’s base, it’s been the patriots versus the traitors.

And the Democrats all over the US, not just in Washington, but everywhere there is a member of the news media, are as the victorious president has characterized them. Democrats amplify the message about “sanctuary cities” because that’s what Democrats do. Even though they could have been using the non-controversial, bi-partisan language of attacking human trafficking and specifically of sexual slavery, Democratic elected officials have joined in demonstrations against what the President and Republicans have characterized as the rule of law.

It’s nasty, it’s misleading, it’s been characterized by numerous retired military and intelligence leaders as counterproductive to American leadership in the fight against ISIS—but politically, Trump is almost certainly winning.

And that’s why Democratic US Representative Brian Higgins can probably expect a well-funded Trump-endorsed Republican challenger in the 2018 midterm elections.

It’s all about the base

Brian Higgins won hugely in the City of Buffalo. He defeated the underfunded, barely visible Republican by over 67,000 votes. He vastly outpolled Hillary Clinton. His margin of victory in Erie County was over 133,000 votes.

So why would Republicans bother?

First, somebody at the Democratic National Committee in Washington, D.C., decided to let the world know that national Democrats would be targeting Republican US Representative Chris Collins, who shares the Buffalo media market with Higgins. (With Democratic Representative Louise Slaughter of Rochester and Republican Representative Tom Reed of the southern tier, there are technically four Members of Congress in this media market, but Slaughter and Reed are barely visible.) In order to blunt any news presence of any Democratic candidate challenging Chris Collins, any national Republican Party strategist would probably succeed in arguing for investing in a robust challenger to keep Higgins busy. If Republicans could utilize a well-known face—say, a Stefan Mychajliw whose own name recognition is as good as Higgins’s, or an up-and-coming Republican female more compelling than either of Higgins’s two recent challengers—then Collins would have an easier go.

But the second reason Republicans might challenge Higgins is that Hillary Clinton lost to Trump in the suburbs, where Republicans know how to gin up turnout, and she lost even before Trump’s message strategists ever had the national bully pulpit where every day, they target the mainstream media, the judiciary, intellectuals, immigrants, the defenders of immigrants, and anybody who defends Muslims, with more airtime, more amplification, and more focus than they had during the 2016 campaign,

As we reported here recently, this political branding technique, which successfully differentiates Patriots from the Other, is a feature of Viktor Orban’s durable parliamentary majority in Hungary. Analysts generally concur that the Conservatives’ campaign to separate the United Kingdom from the European Union (the so-called “Brexit” of summertime 2016) was a campaign that persuaded most of the working- and middle-class native-born rural and suburban English that immigrants and indeed all of Europe was a threat of which they could rid themselves if Britain went it alone. This coming spring, France will choose a new President; two of the four candidates, including the radically nativist Marine Le Pen, are promising what Trump promised: to leave international organizations like the European Union, to favor the native-born national population over immigrants (especially Muslims), and to pursue nationalist economics.

And now it’s in every media market in the US—and most importantly, in the Rust Belt, where Trump did very, very well in the general election of 2016, and where his messaging could very well have carry-through for 2018.

Meanwhile, another well-known figure in the Buffalo media market remains an elected official. This elected official has deep ties to President Trump, deep personal antipathy to Brian Higgins, and a record of strong electoral performance in Erie and Niagara Counties.

His name is Carl Paladino.

Brian Higgins defeated a conventional (and completely underfunded) Republican 2-1 in 2014, the midterm election when Democrats took a drubbing nationally. The turnout in 2014 was much lower than in the presidential year, with only 166,000 voting, compared to 288,000 this past time. Higgins won Buffalo by 31,233. He won the district by 60,000.

So this is how the arithmetic works:

Somehow fight the Democrat to a tie in Buffalo, and eke out the win in the suburbs.

Local Democrats scoff. Higgins has every friend in the world in the local business community. He has broad support among the public-sector unions and deep personal connections to the Building Trades unions that seem to have cut a deal with Trump in Washington, but, as Tip O’Neill reminds us from beyond the grave, all politics is local. Higgins has branded himself on local issues—as the advocate for the Waterfront, not for any foreign policy initiatives. Higgins was on the record for years for a $1 trillion national infrastructure program. He actually introduced a bill in Congress to get the program going—a program much more specific than the vague, tax-credit and deficit-spending boondoggle that Trump proposed in the campaign.

But don’t discount the power of scapegoating and anti-elite messaging among the anxious middle-income voters of the Southtowns and of Niagara County.

And don’t go assuming that the Trump voters of South Buffalo, West Seneca, Cheektowaga, and Amherst will stay home in the off-year election, dropping their turnout in the same proportion as African-American voters in Buffalo routinely do in non-Presidential election years.

It’s early days. National Democrats will soon have a leader. New York State Democrats will be running Andrew Cuomo, the person who will, by 2018, be able to point to at least 1,000 new jobs at the Solar City factory on the Buffalo River—a proven producer of actual economic uplift starring new technology that, in a curiously Reaganesque way, is about growth and tomorrow and possibility rather than about fear, resentment, or anger.

But there are lots and lots of daily news cycles between now and then—news cycles during which some terrorist, somewhere in the western world, might strike, and strike fear into the hearts of Trump voters in Rust Belt media markets that have talk-radio stations, daily newspapers, and Fox News outlets that amplify the White House message.

Could it happen here?

Bruce Fisher is visiting professor at SUNY Buffalo State and director of the Center for Economics and Policy Studies.