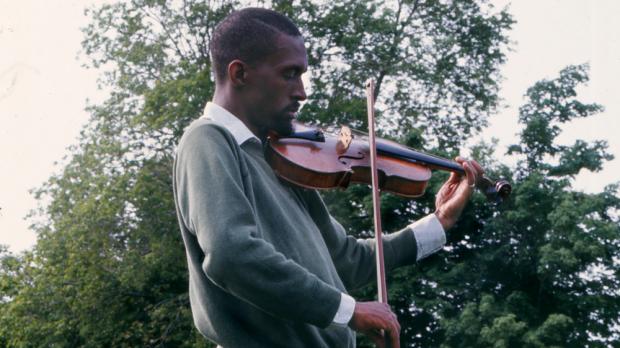 Julius Eastman’s music exists somewhere between Terry Riley (the Creative Associates were the first to perform In C at Baird Hall on SUNY Buffalo’s North Campus) and John Coltrane. His identity, meanwhile, drifts between beging black, gay, and avant-garde, bearing the marks of Buffalo’s minimalist past, and the uptown/downtown divide of the New York City art world, and the poles of disco and academia. Dying alone and homeless at Milliard Fillmore Suburban Hospital in 1990, it wasn’t until his obituary appeared some months later in the Village Voice that many of his friends discovered his fate.

However, his relative anonymity has faded with time. This Friday’s concert of Eastman’s work at the Burchfield Penney Art Center is a testament to how this nearly forgotten composer is suddenly having a surge of renewed interest. A recent article in The New Yorker, a new book from the University of Rochester Press entitled Gay Guerrilla: Julius Eastman and His Music by Renée Levine Packer, who was the Managing Director of the Creative Associates, the ongoing musical tributes paid Eastman by Mary Jane Leach, and a newly issued recording—Femenine [sic]—all speak to the musical resurrection Eastman’s work is experiencing.

In a conference room at the Burchfield Penney Art Center, Don Metz, with his shock of white hair and elliptical speech pattern—the kind of person who has too many thoughts that are colliding and linking up—is clearly excited when discussing how the concert came about. “A long time ago I made a list of people that I think would be great to perform, and so then it’s an issue of timing. Some money came in. I’ve always liked his music and have been familiar with his work since 1980.

“When I found out Renée [Levine Packer] was writing the book Gay Guerrilla, I thought, ‘Oh, great—I can bring her in.’ Then I found out about Amy Knowles who did Crazy Nigger all on percussion with electronics the concert made itself and I called it a day. Then I thought about doing either Evil Nigger or Gay Guerrilla. I decided on Gay Guerrilla because it is the most logical thing to do in the East Gallery with the reverberation, so I added that piece.”

Enter Janz Castelo, founder of the Buffalo Chamber Players adding, “In the course of my research I came across Julius Eastman and over the last few years have grown very interested in his music and his story. Then, I think I was having lunch with Don and I don’t who mentioned it first, but it was some great serendipity. We’re performing Stay on It and then, together with a bigger group, we will perform Gay Guerrilla.”

Born in Harlem, Eastman grew up in Ithaca and was trained as a pianist and choir boy. After a year at Ithaca College, he moved to Philadelphia to study at the Curtis Institute of Music in 1959. When he moved to Buffalo in 1968, he found himself entering fertile ground. “There was the recovery of Gertrude Stein, Steve Reich was working, Morton Feldman,” Metz says. “It was an interesting period in Buffalo revolving around Minimalism. Culture was changing. Vietnam was over and 60s culture was heading into adulthood, and so what remained was the environmental movement, civil rights, women’s movement, gay rights, and the more childish aspects of the hippies went away. The Creative Associates existed at the perfect time. Buffalo had a history of the avant-garde: there was funding, and there was a large group of like-minded artists and also world-class musicians all together. And it carried over into other forms to, like video. It’s 1979 and we are about to get Media Studies; Just Buffalo Literary Center started around that time. These things were happening here for a reason.”

One of the challenges facing a performer of Eastman’s music is the lack of scores written in the composer’s hand. How do you become canonical without a score? Each reference to a performance on video or a recording freezes Eastman’s compositions. Castelo, current violist in the Buffalo Philharmonic Orchestra, in discussing the piece Stay on It, says, “It’s like notating a Miles Davis solo and then having everyone play that way from now on. Even in so-called ‘traditional classical music’ a Mozart concerto, for example, the cadenzas [solo passages allowing the performer to showcase their virtuosity]) weren’t written down. So there was probably improvisation since time immemorial. But, with Mozart, at this point, you play the ink. There aren’t any liberties taken. It’s been taken into the museum, as it were.”

Castelo offered this glimpse into his process as a classical musician: “When we look at the music of the past, we obsess over every minute detail: Why was this note picked to start the crescendo as opposed to that one. Now that I’m friends with some contemporary composers, I think as performers we over-obsess and forget that music is written by people. Composers are just like anybody else: They worry about their next check, they have good days and bad days, and don’t always pore over every detail like we do. Julius Eastman, didn’t know him, but I find it interesting he didn’t specify instrumentation in the pieces we’re doing. Just that they should be from the same family. Gay Guerrilla is often performed with four pianos, but we aren’t going to do that. He just suggests four pianos as one possible version.”

This is in contrast to other Minimalist composers such as Steven Reich or Phillip Glass who never seem comfortable relinquishing control. Perhaps this is due, in part, to Eastman’s jazz background or simply his willingness to trust the musicians to be as dedicated as he was in scoring the pieces. Stay On It even has a pop feel to it. It’s a head-nodder that gets into a groove and usually the place that those with a non-academic interest in music start.

While the issue of source texts to consult is certainly a very real challenge—though thanks to people like Mary Jane Leach, who has made numerous Eastman scores available for download, there is at least something musicians can consult—the provocative titles of Eastman’s oeuvre can present problems for both audiences and musicians alike. Knoles, who has played Eastman’s works around the world, had this to say, “When we were designing postcards we weren’t even sure if we could just mail these titles exposed to the world. The titles are amazing and it took serious guts for him to name these pieces. I’ve had very disparate experiences performing Crazy Nigger. In 2014, at these small venues in Eastern Europe I see a poster that says “Amy Knowles, Crazy Nigger” and I’m like, ‘Oh shit. I can’t put these up in my office at school.’ Then I did the piece with a Butoh dancer, Michael Sakamoto, at an art school in the Pacific Northwest. We did it. Everything was okay…kind of fine… and then the shit hit the fan. For some faculty and students it wasn’t okay that a white woman is performing a black man’s piece called Crazy Nigger.”

How does Knoles come to terms with playing these pieces? Simple. To her it is about being a musician and making more people aware of Eastman’s music. She said, “He was a contemporary composer and I’ve dedicated my life to playing contemporary music. Those of us interested in this take on a sort of vow of poverty. I’m series about this stuff. And I’m a female percussionist. And Julius played these pieces with women and white males and anybody. As he aged, he became more aware and more comfortable with his blackness and his gayness and, I think, that is where the power of these pieces comes from. The are very emotional while being intellectually profound. That’s what makes him so beautiful. I understand the other side of the argument, but if I’m brave enough to take his music to all parts of the world to raise awareness of him, I’m good with that.”

Indeed, everyone interviewed for this piece has a sense of honoring Julius Eastman and proselytizing on his behalf. Metz said, “To loop back around to why we are doing this concert, I believe it is part of the Burchfield’s responsibility. Julius is gone. He was gone too early. I want people to know his music. It is important. But also it is important that people know what he stood for. His political stance. Being a black, gay, composer musician in a very white classical music world, it’s important.” Or, to quote the Burchfield’s Curatorial Writer Ron Ehmke, “I’m astounded by his talent, heartbroken by his fate—and thrilled that he is currently enjoying a posthumous Third Act. I’m telling you, it’s a movie waiting to be made!”

The Scores of a Man: A Revival of Julius Eastman
Friday, February 10th, 5:30pm
The Burchfield-Penney Art Center