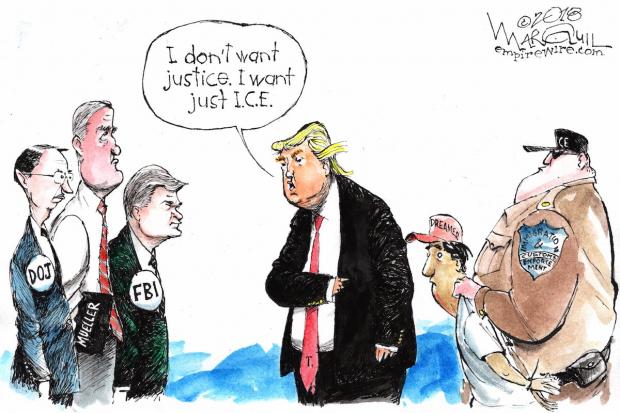 America certainly has a different kind of president than what it is used to. What distinguishes Donald Trump from his predecessors is not just his temperament and generalized ignorance, but also his approach to policymaking.

First, consider Bill Clinton, who in 1992 was, like Trump, elected without a majority of voters. Once in office, Clinton appealed to the left with fiscal-stimulus and healthcare bills (both unsuccessful), but also tacked center with a pro-growth deficit-reduction bill. He appealed to the center right by concluding the North American Free Trade Agreement (NAFTA), which had been conceived under his Republican predecessors; and by signing a major crime bill. And he reappointed the conservative stalwart Alan Greenspan to chair the US Federal Reserve.

Clinton hoped to achieve three things with this “triangulation” strategy: to enact policies that would effectively address the country’s problems; to convince voters who hadn’t supported him that he was looking out for their interests, too; and to keep his own base intact.

In 2008, former President Barack Obama was elected with a popular majority. But, like Clinton, he moderated many of his positions once in office. He tacked to the center with technocratic financial-rescue and fiscal-stimulus plans. And he pushed through a market-oriented health-care bill modeled after legislation that Mitt Romney had enacted while serving as the Republican governor of Massachusetts.

Obama also appealed directly to the right with an (unsuccessful) attempt at a “grand bargain” to cut deficits and social spending. His market-oriented cap-and-trade plan to regulate greenhouse-gas emissions was almost indistinguishable from that of his Republican opponent in the 2008 presidential election, Arizona Senator John McCain. And he reappointed Ben Bernanke, originally nominated by Republican President George W. Bush, to chair the Fed.

Obama strove to represent not “red” or “blue” America, but “purple” America. He pursued cautious and technocratic policies that he hoped would attract Republican support. And when his own supporters objected, he reminded them that national unity and mutual respect, not narrow partisanship, would eventually bend the moral arc of the universe toward justice.

Trump, by contrast, won the presidency while losing the popular vote by a wide margin. Yet, once in office, he promptly appealed to right-wing white nativists by issuing his promised travel ban against Muslims. He tried to destroy the 2010 Affordable Care Act (Obamacare) without having a plan for what would replace it. He again appealed to the nativist right by dismissing police brutality against African-Americans, and by describing white supremacists as “very fine people.” And he finished his first year by signing legislation that cuts taxes for the rich, but does little to win over anyone else.

This is not normal politics. Trump clearly has no interest in unifying the country or enacting policies that will actually work. He has not given the majority of Americans who oppose him any reason to change their minds, nor has he counseled his base on the need for durable policies rather than evanescent legislative victories. Most importantly, he has done nothing to help himself get re-elected.

Of course, the same now applies to many Republicans. Here in California last year, we were treated to a remarkable spectacle in which the state’s Republican delegation in the US House of Representatives did not even bother to argue for a tax package that would benefit their constituents. It was as if they had already given up on winning re-election, and were all looking forward to leaving Congress to take high-paying jobs as lobbyists.

According to the Trump administration, its next legislative priority is infrastructure. That sounds like an issue where Trump could tack left, by devising a plan with egalitarian distributional effects and evidenced-based provisions to boost economic growth.

But we shouldn’t count on that outcome. The Trump administration doesn’t seem to have any coherent policy-design process. There have been no hearings or white papers to assess the costs and benefits of various infrastructure proposals. Nor have there been any discussions with lawmakers to establish a rough consensus upon which to base legislation. As with the travel ban and the attempt to repeal Obamacare, there has been no public deliberation whatsoever. All we have are the president’s tweets.

Back in 1776, Adam Smith argued that, in a system founded on “natural liberty,” the government’s three tasks are to provide national defense, ensure public safety and the enforcement of property rights and contracts, and supply infrastructure. According to Smith, the government has the duty to “[erect and maintain] certain public works and certain public institutions, which it can never be for the interest of any individual, or small number of individuals, to erect and maintain.”

To Smith, the reason why governments must take up the task of building infrastructure was clear: “the profit could never repay the expense to any individual or small number of individuals, though it may frequently do much more than repay it to a great society.” Today, we know that public goods actually can be made profitable, but only by granting monopolies, which comes at a high cost to society.

Unfortunately, Trump’s staff does not seem to have gotten Smith’s memo about good government. The administration will most likely propose an infrastructure program based on public subsidies for private investors, who will then select projects from which they can profit by charging monopoly prices. The plan will be well-received at Fox News, and possibly even by pundits at the New York Times, who might stroke their chins and lament that the Democrats are rejecting Trump’s open hand on infrastructure.

But, unlike Clinton and Obama, Trump will have shown yet again that he does not intend to be the president of most, let alone all, Americans. Rather than use the opportunity provided by a debate over infrastructure to advance the cause of national unity, he will instead push the US further toward kleptocracy.

J. Bradford DeLong is Professor of Economics at the University of California at Berkeley and a research associate at the National Bureau of Economic Research. He was Deputy Assistant US Treasury Secretary during the Clinton Administration.