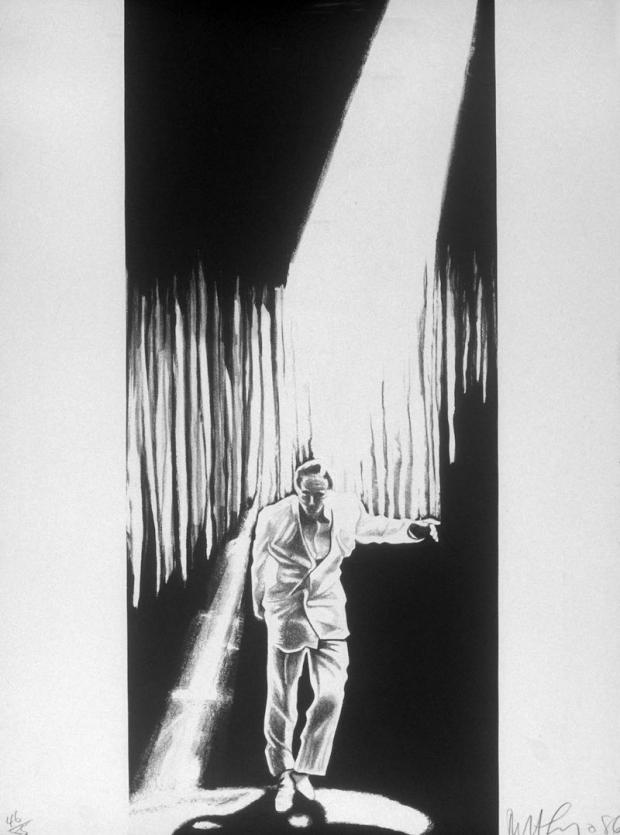 Talking Heads by Robert Longo, part of a show culled from Gerald Mead's collection of work by alumni of SUNY Buffalo State.
by
Jack Foran
/ Feb. 7, 2018 6am EST

It figures that avid art collector and educator at Buffalo State for the last 30 years or so Gerald Mead would have a strong collection of works of Buffalo State artists. Works of three score alumni/alumnae from his collection are currently on show at the Upton Hall gallery on campus.

Including many current or former art instructors at the school who are also alumni/alumnae. So particularly interesting for the chance to try to detect teacher-to-student influences. Direct or oblique.

Such as from artist and teacher Joseph Piccillo to one of his more notably accomplished students from the 1970s and Hallwalls original Robert Longo. Both artists best known for intense technique representational but nonetheless enigmatic artworks. Wherein it is clear enough what is represented, what is depicted, not clear at all what is happening, what is going on. The Piccillo work in the show is a close-up view of the face of a woman, possibly in a state of momentary sequester from some deep emotional pain, or possibly asleep, and for added enigmatic effect, the face crossed by cross-form double thin lines of shadow. The Longo work on show, called Talking Heads, depicts that 1970s-era musical group’s lead singer and writer David Byrne—I presume—in a spotlight in a study of extremes of light and shade. And levels of enigma. Longo’s ambivalence visual artistry strain layered onto Byrne’s and the Talking Heads’ anxiety funk rock performance brand. “Once in a lifetime, water flowing underground.”

Two works on show are by furious miscellany fiberworks artist Lauren Belfer, one free-standing sculptural piece and one wall-hanging work. Who taught Hillary Fayle, represented in the show by a finesse needlework and nature item consisting of stitch-joined gingko leaves. And Lily Booth, represented by a found item pre-patterned needlework sampler, about a birthday party surprise—image of a sprung jack-in-the-box clown—with surprise needlework superaddition.

Belfer also taught Stephen Saracino, who ultimately went in a metalworking direction—his work on show is a small silver and gold sculpture vignette of a boxing match, called It’s Friday Night and Roberto is Hot. Saracino in turn taught Deborah Stewart, who went in a ceramics direction—her work on show is a connected trio of idiosyncratic form earthenware pots, entitled Conversation Pod #3.

Printmaker A. P. Gorney, represented in the show by a lithograph on Shikitsu paper of somber ambiguous subject matter—a barely legible cluster bouquet of roses, above a patch of brilliant white light, above the word “pest” in old style Germanic lettering—not as some benign minor annoyance in the context, but the German word “plague,” as in bubonic—taught Drew Matott, represented by a pulp printwork on “combat paper,” depicting a small group of soldiers amid nondescript environs with a sense of fraught with unseen dangers, entitled What We Left Behind. (The Matott work clearly also influenced as to both subject matter and style by another of his Buffalo State teachers—not represented in this exhibit because not an alumnus—Peter Sowiski.)

While Chuck Tingley’s work on show, entitled Boom, seems influenced by Piccillo not so much directly as indirectly, filtered through Longo’s work.

Also in the show are works of three other Hallwalls originals. Diane Bertolo’s Marking Time, October 2012, a kind of abstraction art calendar, with for whatever reason an extra day to that month. One of Cindy Sherman’s alter ego self-portraits, in this case a 1950s-era faded glamour figure, pregnant and persevering. And Michael Zwack’s mystery abstraction—earthscape perhaps, or more like moonscape—entitled History of the World.

The show on the whole attests to Buffalo State’s strong instructional tradition in art fundamentals of drawing and painting and design. Several fine portrait paintings or drawings, including Anders Fernbach’s superb self-portrait with an intensity and directness reminiscent of ancient Coptic art, Julia Douglas’s painterly realist Christian, Bruce Adams’s idealist realist Untitled #3 from the Divine Beauty Series, and Edrys Wajed’s unfinished-look sketch portrait of a young African-American subject struggling to survive psychically, called Bottom of Mankind. (Wajed one of three artists in the Buffalo State show with works in the portraits of African-American notables Albright-Knox Public Art installation on a wall at Michigan and Ferry streets. The two others, Julia Douglas and Chuck Tingley.)

The exhibit continues through February 15. An artists reception is scheduled for February 13, from 5 to 7pm.