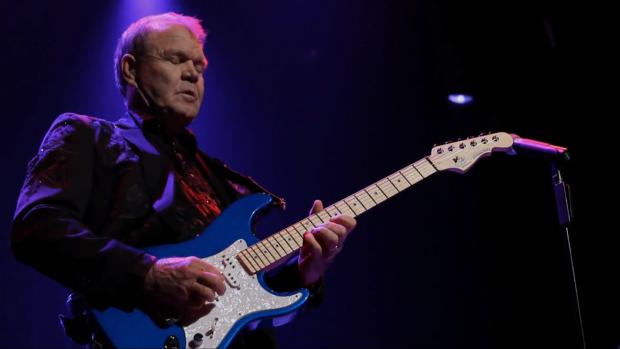 You don’t have to be a fan of Glen Campbell, singer and guitarist, to be moved by this documentary about his last tour. In fact the more of a fan you are, the harder it may be to watch.

In 2011, as he was preparing to tour to promote his album Ghost on the Canvas, Campbell was diagnosed with Alzheimer’s disease. It came as no surprise: He had been having memory problems for a few years by that point. Rather than cancel the tour, the decision was made to go ahead with it after publicly announcing the star’s condition so that audiences might be prepared for occasionally erratic behavior.

If you’re of a cynical bent, this might strike you as the worst kind of exploitation. As Campbell’s son (one of three of his children in his touring band) says, “We were aware that there might be people coming out for a NASCAR show, hoping to see a wreck.” And there were more than a few difficult moments during the 150 dates of the tour, as this documentary does not flinch from presenting.

But I’ll Be Me overcomes any doubts as to the intentions of Campbell’s family as they guided him through these past years. His wife Kim, who acted as a general manager, kept a camera with her at all times, both on and off stage. And if there are a few moments that feel like “too much information,” they’re forgiveable in the service of a film that succeeds at putting a human face on a hellish affliction that slowly and inexorably strips away a person’s memory and personality. As Kim says at one point with blunt understatement, “This is not a fun illness.”

As willing as family and friends are to contribute to the film (famous faces who pay tribute include Vince Gill, Kathy Mattea, Brad Paisley, Bruce Springsteen, the Edge, Blake Shelton, and Paul McCartney), the one voice missing is the man at its center. Much of what makes this documentary so moving is the difference between Campbell at his best onstage (whether or not you’re a fan of his brand of country pop, the man was a hell of a guitarist, going back to his days as a top session musician in the early 1960s) and his increasing incapacity off it. He deflects attention from his lapses by making jokes about them, a tactic that becomes more poignant as the disease progresses.

It might have been hoped that this film could have done more to document Campbell’s place in the history of popular music, which is not inconsiderable. But for what it is, I’ll Be Me is a palatable but powerful plea for attention to a disease that is likely to explode in coming years with the aging of the baby boomers. It’s hard to shake the lyrics of his final recording, “I’m Not Gonna Miss You,” in which he sings “You’re never gonna see it in my eyes / It’s not gonna hurt me when you cry.”