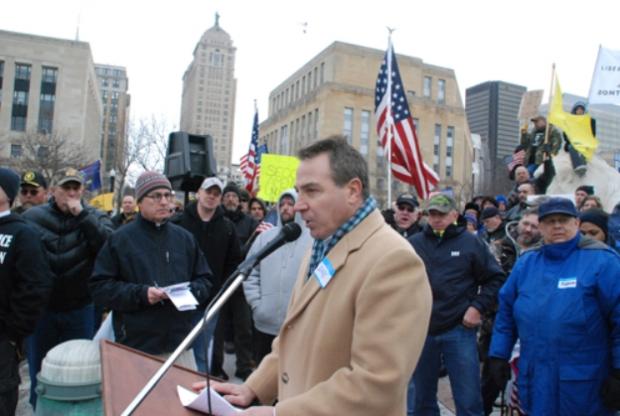 On Twitter, I follow over 5,300 accounts. I’ve been on the service since May 2007 — almost 10 years — and I follow a wide mix of accounts that loosely track my interests.  This means everything from celebrity chefs to Howard Stern wack packers to conservative pundits to liberal pundits to journalists, and pretty much every Buffalo-based account I think is interesting and worthwhile. I do not, however, follow Nazis. I have nothing to learn, and nothing to gain from following Nazis, and any time a Nazi — whether overt or Pepe’d — attempts to interact with me, that account is quickly muted or blocked. Not so for Assemblyman David DiPietro (R-East Aurora), who seems to enjoy following Nazi accounts.

Among the accounts this sitting Assemblyman from East Aurora follows are:

@Captivalove: Display name: “Jihadi Huntress”; Bio: “It isn’t Islamophobia when they really ARE trying to kill you!”

@Early__May: Display name: “Caucasian Spring”; Bio: “I love my whiteness. And yours. Environmentalist/conservationist, animal welfare advocate. I auto-block progs who use the word ‘racist’ unironically.”

Can you be surprised? Listen to snippets from his own radio show:

To be fair, DiPietro doesn’t seem to have used Twitter since March 2016, but he affirmatively followed these accounts for some reason — it didn’t happen by accident. Based on his public pronouncements, he shares the anti-Muslim and pro-gun views of some of these accounts, so there is a unity of thought and purpose here.

It’s helpful for voters to know what sort of thought influences their elected officials.