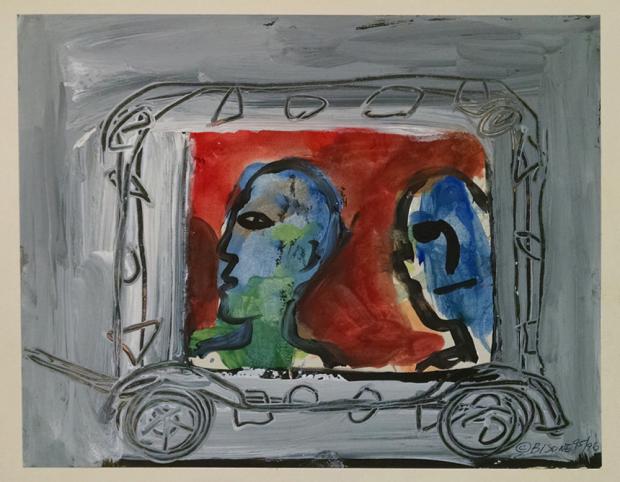 Local area artist Edward G. Bisone relocated to California for several years during the 1990s. A score or so of his paintings from that period are currently on show at Art Dialogue Gallery. The show is called A California Suite.

The sojourn somewhat lightened both his palette and his mood. His output changed from the darkish turmoil semi-abstractions he characteristically produced in Western New York to lighter pastel shades and more relaxed constructions—a little in the manner of Richard Diebenkorn—but without ever changing the essence of his art, which was always about the sense of fun in making it, sense of humor in the product. The title of one of the West Coast works seems to sum up the essence. It is called At Play.

Sense of fun, sense of humor, and that most sought-after but elusive character sometimes of artwork—perhaps best articulated by as well as associated with the work of Picasso—a childlike, innocent, unschooled artist quality. Picasso said “All children are artists. The problem is how to remain an artist once you grow up.” Bisone—his artwork—has that quality. For example and notably in a work called Seven Monks. Consisting of that number of sack-like amorphous brown garments with Charlie Brownish heads protruding from them, and cursory facial indications limited to imprecise eye symbology and toothy crescent smile mouths.

Another work in a similar casual comical vein shows two boxers having at it above the supplied pun via wrong homophone title Toe Two Toe. Whereas Two Running Horses with Black Mountains has a Western Indians anthropological art look to it. Ghostly passing horses and cone-shaped black mountains. What is ephemeral and what is enduring. Another work is a still life of a table setting—knife, fork, cup, vase or vial—scratched with the back end of the brush it looks like into thickly applied more or less monochromatic greenish grayish paint.

Bill Krause’s Bloom in Blue still life with pot and plant and newspaper. Jane Jacobson’s comical Local Leaders Spark Unrest among Disenfranchised Youth at South Georgia Climate Talks, depicting three penguins, foreground, in conference, while a multitude of penguins, background, look on. Also in a comic vein, Alison Kurek’s Art History #4— Grant Wood’s American Gothic—sort of, consisting of four reiterations/reinterpretations of the Grant Wood painting, with man and wife figures in one case human, in another canine, in another feline, and another porcine.

And much more. The Western New York Artists Group show continues through February 12. The Edward Bisone show through March 18.