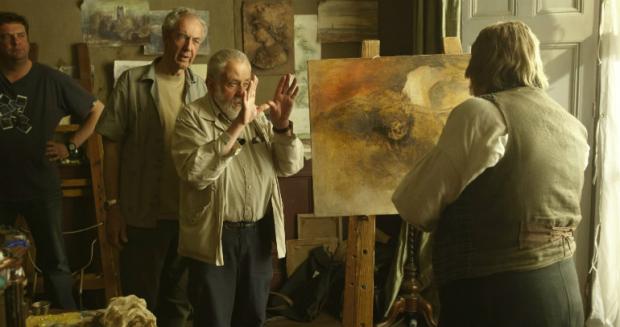 Mike Leigh is best known for his compelling, quietly emotional tales of everyday life in modern England, from a stirring series of character-driven telefilms made in the 1970s and 1980s to Another Year (2012). His latest film, Mr. Turner, which opens Friday at the Amherst Theatre, is only the third period piece he’s made in a career that spans four decades. (The others were Topsy-Turvy and Vera Drake.)

The film is a meticulously crafted portrait of the artist—painter J. M. W. Turner—as an old curmudgeon. Star Timothy Spall sadly didn’t get an Oscar nomination for his work as the 19th-century landscape artist but was named Best Actor at Cannes. Leigh and his regular cinematographer, Dick Pope, have been working on the film since 1999, when they first discussed a film on Turner’s life after finishing their Gilbert and Sullivan movie, Topsy-Turvy.

I spoke to Leigh when he was in Manhattan in December to promote Mr. Turner. He has a reputation among journalists as being a “difficult interview.” One British reporter declared that speaking to him “fits somewhere between a job interview and a trip to the dentist.” However, my encounter with him was cordial and informative—perhaps because I mentioned my nervousness before asking him a series of questions he was all too happy to answer.

Leigh maintains direct eye contact as he speaks and is prone to honing his thoughts by inserting tangential ideas that clarify what he is trying to say (then returning to complete sentences that he had left unfinished). He is an artist who juggles emotion and intelligence as he talks about his work; he is also perhaps the best dissector of interview questions that I’ve encountered.

Mr. Turner is the first “picturesque” Leigh film, thanks to the beautiful imagery crafted by Pope, who is nominated for a Best Cinematography Oscar and received a technical prize at Cannes for the film. (Among Pope’s many credits, he was the original cinematographer for Buffalo 66 before he had a disagreement with Vincent Gallo.)

Leigh underscores Pope’s importance to the project: “Dick Pope has shot everything I’ve done since Life Is Sweet in 1990. We spent years talking about this film and looking at Turner’s work. They were very generous at the Turner Bequest in London at the Tate Gallery, where you can see all of his sketchbooks; his hand-made color charts are particularly interesting. We did all that so that we could make a film that was informed by the spirit of Turner.”

When asked about the ways in which Mr. Turner stacks up against standard Hollywood biopics about “the tortured life of a great artist,” Leigh speculates about what a more conventional version of Turner’s life would be like. “First of all,” he notes, “you’d get a fat baby, then you’d get a fat little boy who looks like Timothy Spall and who could draw, then you’d get a pimply teenager. But this is not interesting.” His interest in the subject of Turner, he stresses, is markedly different from that of filmmakers who make certain that each event in the subject’s life is “significant and symbolic.”

He is interested, he says, in making “films in which you don’t have to explain everything. Life explains itself. You walk past somebody on the street or you sit on the subway and hear a snippet of conversation for which you don’t get three chapters’ worth of explanation…You just hear something and immediately get it. You contextualize it under your own steam. That’s how I like to tell stories. It’s just real.”

Leigh’s justly celebrated “rehearsal” period for each of his films includes several weeks in which he works with his actors, having them create back-stories for their characters and act out scenes from their lives that aren’t meant to appear in the film. This “workshopping” process is inevitably the most-discussed topic in any interview with Leigh, since the approach is so nearly unique. (John Cassavetes is one of the few other filmmakers to have worked this way.)

When asked if this improvisatory process is any different when he is making a film based on real people, he quickly responds that it isn’t. “It doesn’t change at all. The only difference is that you obviously read and absorb and research, and that feeds into the process. Look, here’s the thing: You can read until you’re blue in the face, you can read a million books. You can research for a thousand years. But that doesn’t make it happen in front of the camera. You’ve still got to have flesh and blood people, living and breathing and being their three-dimensional selves in front of the camera.

“The work we do is character work, improvisation work, and work about how people behave, and how they talk and speak and move. All of that has to happen anyway. So all you do is absorb what you’re going to by research, and then you do all that work. The difference is, of course, that when I’m doing one of my ‘regular’ films, so to speak, we’re completely making it up from scratch, without reference to anything. In this case we’re dramatizing real events or people.”

The other key collaborator here is of course Spall, whom Leigh has directed in five previous films. (Americans may best remember him as Wormtail in the Harry Potter movies.) Spall has created a striking portrait gallery of characters for Leigh, including a bumbling restaurateur in Life Is Sweet (1990), an understanding photographer in Secrets & Lies (1996), and a frustrated cabbie and family man in the underrated All or Nothing (2002).

Leigh never considered another actor for the role of Turner. He calls him “an extremely versatile character actor, indeed,” and credits Spall’s process as the key to his talent. “Although he’s very much an actor that taps into his own emotional and life experience resources, he isn’t playing himself. He’s exercising that muscle of versatility. And he’s very sensitive to the 19th century—he’s read a lot of Dickens and is very good at playing 19th-century characters. Quite a lot of the actors in Mr. Turner are. It’s just something they can get, something in their received collective memory.”

Leigh asked Spall to be involved in the film years before it was in preproduction, going so far as to ask him to take painting lessons in the interim. But he doesn’t want his actors to “live their roles” off-camera, as many of the most dedicated stage and screen actors have been known to do. “Timothy wouldn’t want to go home as Turner, not at all. What I do about character acting is to make certain that people are not playing themselves. When an actor plays a part, she or he is in there, of course, they’re drawing on their own resources. People once thought that David Thewlis became the character of Johnny [in Naked] and that Brenda Blethyn became Cynthia [in Secrets and Lies]. But if you can imagine trying to make a film with somebody who was Cynthia, or didn’t come out of character, you’d never get the bloody film made!

To viewers outside Britain, Leigh’s films seem to offer a “snapshot” of the times they were made in. With Mr. Turner, we see instead a very pungent snapshot of the early 19th century. Leigh is aware of this aspect of his work but maintains that he doesn’t struggle to achieve it. He says that’s “it’s a given” in his work. “With my contemporary films I’m implicitly and un-self-consciously plugging into the zeitgeist, capturing the zeitgeist, the moment we’re in.

“But, of course, I’m not concerned to do that. I’m not concerned to make films about England or Englishness or whatever you call it. I think the subject matter of my films, without wanting to sound in any way pretentious, is universal. Because actually my films are about living and dying and work and relationships, family and children, having children and not having children, sex, all the things that are universal. The milieu, the tapestry, is where we are, which is in England. But when I’m making something I don’t think, ‘ah, now I’m capturing the zeitgeist…!’ “

A key scene in the later part of Mr. Turner finds the artist in the audience at a vaudeville show in which he and his work are mocked in a comedy sketch. Leigh says that he didn’t include the scene to reflect on the fact that every artist has to deal with going in and out of fashion. “It never occurred to me at all,” he declares. “That happened in the film because that’s what happened to Turner. And that vaudeville sketch that you see in the film, I wrote it myself, but it did actually happen. Queen Victoria was rude about him, she hated his stuff. And that’s what you see in the movie. Other people were rude about his stuff. The film is all about what happened to Turner, really.”

Although his best-known films are all dramas, even his most serious films—including the uncharacteristically sentimental Secrets and Lies and the uncharacteristically grim Naked (made back to back)—boast sequences that are extremely funny. In his new film, the humor emerges from Turner’s behavior: he grunts more than he speaks and is prone to blending the colors in his paintings by spitting directly on the canvas (even when the work is already hanging in a gallery).

Leigh is quite direct about the audience reaction to his pictures, whether it’s laughter or tears. “People ask me, ‘When do you decide where it should be funny and where it shouldn’t be funny?’ I don’t. It looks after itself, because life itself is comic and tragic. That’s how it comes out of the scene; you mine it out of the soil.”

Does he think about the audience throughout the creation of his pictures? His answer is characteristically direct. “I don’t know how you would make a film if you weren’t constantly in a state of preoccupation with the audience, because that’s what my job as a filmmaker and a storyteller is. I am the representative of the audience. I’m there to say, ‘Do they get this? Would it be better if it was like this? Should we reverse the order of those shots?’ “

Most filmmakers stridently avoid the question of what their films are “about,” but Leigh makes no bones about the general theme found in all his films. “I make films that are about freedom,” he says. “Throughout my films there’s a running theme about the ‘done thing,’ you know, about conforming or not conforming, on all sorts of different levels.

“The one thing I don’t do is make films that leave you with anything other than a highly ambivalent and complicated set of things to think about.”